It was 40 minutes before showtime, and Alexander Shelley was musing aloud about "the co-existence of positivity and negativity, of assurance and doubt" in the music of Gustav Mahler. You only needed to hear him pursue that thought, during a public chat in the foyer of the National Arts Centre's Southam Hall, to know that the new music director of the NAC Orchestra marks a drastic change after 16 years of Pinchas Zukerman.

Shelley, who opened his first season as music director on Wednesday evening, is an intellectually curious Englishman who thrives on piquant juxtapositions of works old and new. His inaugural program was a prime example, focusing on representations of childhood in works by Mahler, Edward Elgar and Canadian composer Zosha Di Castri, whose Dear Life is a multimedia transformation of a short story by Alice Munro.

Shelley began researching sources and collaborators for what became the Munro collaboration soon after his appointment was announced nearly two years ago. It was a priority for him to commission a new piece for his first shows, and to have something current to add to a thematic program that couldn't be summarized merely as Great Works By Great Composers.

Zukerman, a famously gifted violinist, held a strong following in Ottawa for his honeyed, lyrical performances of well-known concertos. But programming bored him; his final season began with an off-the-rack mix of pieces by Mozart and Beethoven, including a symphony the orchestra had played only a few months earlier. As a conductor, he was mostly stuck in a conservative holding pattern, with little curiosity about what new thrills could be teased from old pieces. As for new rep, Zukerman only seemed to enjoy pieces by his late father-in-law Malcolm Forsyth, sometimes opting to be out of town when other premieres reached Southam Hall.

The 36-year-old Shelley is ambitious and aware of his own gifts, but can talk about music and perform it without a Zukerman-style suffusion of ego, and of what Globe music critic Robert Harris once called "self-satisfied beauty." Zukerman often gave the impression that he was the show, in which others were being allowed to participate.

Zukerman's main legacy at the NACO, still evident during parts of Shelley's first concert, is the glossy dark ensemble sound he developed. Shelley has already served notice that his need for this lush timbre will be limited mostly to Romantic and post-Romantic music. We can be sure he won't – as one NACO musician said privately to me of Zukerman – serve up everything with "chocolate and peanut butter."

Another remnant of the old regime is a visible increase in demographic stagnation among the NACO's audience. There was a lot of talk during Zukerman's time about young people and classical music, but you'd never know it from the grey heads that crowded the hall on Wednesday.

The multimedia nature of the Munro piece seemed a clear attempt by the new regime to produce a show that might resonate with a younger crowd, should the word ever get out to them. Munro's tale Dear Life, slimmed for performance by writer Merilyn Simonds and read by actress Martha Henry, is a dark recollection of things whose true shapes aren't necessarily clear in the narrator's mind. Everyone in it is captive to something, which may have helped form the visual design provided by Montreal production team Turbine. Projections on screens around the orchestra and on a ribbon curtain in front created a dynamic visual space that seemed at once to emphasize the volume of the stage and to configure it as a box with no exit. Larry Towell's projected black-and-white photographs evoked the story's rustic world, in alternation with expressive patterns and trembling spider webs of light.

One problem with the spectacle and the spoken narration was that they tended to nudge Di Castri's shape-shifting cinematic score into the background. From my seat in the middle of the floor, there were also two basic production errors: a metallic echo on Henry's recorded voice, and a windy pulsing whine from the projector, which was audible even over the orchestra at mid-volume.

The main sounds in this well-received program, however, were those of optimism and exploration. You could hear both in Elgar's zestful Suite No. 1 from The Wand of Youth, and in Mahler's Symphony No. 4, performed with soprano Erin Wall. Shelley isn't afraid to work out his musical hunches in public, and he's still getting to know his players. But his concerts this season seem likely to be more risky and adventurous than anything heard at the NACO in years.

Did I mention he's also the snappiest dresser ever to lead the NACO? He wore three outfits on Wednesday: a slim black dinner suit for his talk, with deeper black lapels, a straight black tie and extreme cut-away collar; a looser-fitting tux with a black shirt and straight tie for the concert's first half; and a tail-coat for the Mahler, with customary white tie, but with a black waistcoat. The detail that really caught my eye, however, was the rim of brass above each heel of his Alexander McQueen dress shoes. As he pointed out when I mentioned them, each had a tiny brass skull embossed on the back – a dark memento mori on a beautiful shoe. What was that you were saying, about the negative and the positive in co-existence?

Theatre Review
A premiere production and a subtle revival at Soulpepper Theatre
September 11, 2015 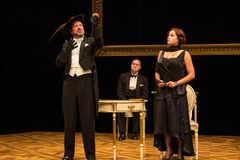 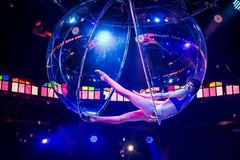 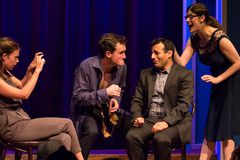