Canadian Opera Company conductor Johannes Debus is frank about his relationship with the music of Richard Wagner.

"I always tried to avoid Wagner," he says. "There is something in this music that is so sick. Something in it that takes you over and doesn't let you go. It manipulates you. Of course, there are those moments of ecstasy that are so powerful, so strong. And yet, sometimes you don't want to get close to that, because it's somehow dangerous. There's a reason why that music has been used and abused in our history – in German history."

But Debus has been unable to avoid Wagner any longer. Over the past three years, the Canadian Opera Company has presented three of the four operas of the famous Ring cycle, with Debus leading the orchestra, and soprano Christine Goerke – the next great Brunhilde – featured on stage. Two years ago, it was Die Walkure. Last year, Siegfried. And, starting Feb. 2, the last of the cycle – Gotterdammerung.

Debus's observations are not entirely new regarding the music of the great, controversial 19th-century opera composer. Debus quotes Leonard Bernstein on Wagner, who said: "I hate Wagner. I hate Wagner on my knees." (He also quotes Woody Allen: "Every time I listen to Wagner, I get the urge to  invade Poland.")

Traditionally, these qualms have been washed away by citing Wagner's musical/historical significance, which is undeniable, or absolving the composer from the abuses to which his music has been put, or just noting its power and popularity. But anyone who knows Debus knows that he is an intense, thoughtful, deeply committed artist and citizen in the modern world. Simple answers to ethical and aesthetic dilemmas are not for him. And fair enough. These days the music of Wagner needs to be confronted morally as well as musically.

Perhaps that's why Debus struggles so hard when I ask what surprised him about Wagner's music when he got to know it more thoroughly.

He says: "In a certain way – it may seem odd – I surprised myself in being quite comfortable in his world." Then stops. "No, that's not quite the right word. Home is also not the right word." Another pause. "I know the nationalistic spin that people have put on Wagner's music, but I feel that a piece like Gotterdammerung is far more universal than I expected. That's the thing that surprised me. We all know that Wagner was highly interested in Greek tragedy. And that's what he goes back to – those really elementary everlasting human questions. There is more in this music than the standard heroic, let's conquer the world affirmation that Woody Allen is making fun of. There's something more cathartic. At the end of the opera, as depressing as it has been, you can see a sign, I think, that says, 'Hope. …'"

Debus has worked hard to understand his philosophical reactions to Wagner and the Ring cycle, and he equally is clear-eyed about the "master's" music. "The danger in those operas," he says, "is that the instrumentation is so good that you can easily make a very strong impression. And you feel great as a conductor. 'I have a hundred people playing loud! I'm like Ben-Hur in his chariot!' But you have to resist that. There are moments in the score that are so intimate, moments of pure chamber music. They must be heard as well."

He adds: "I think the key to all of these pieces is for you to understand the architecture. At the end, the proportions are always so well-balanced. People always think, 'Oh Wagner – hours and hours of music, how do you manage to digest all that?' But, you know, sometimes I feel it's harder to get the idea of a Beethoven symphony than one of the Ring operas. There's something in the overall composition, in the structure of Wagner, that is somehow simple. It unfolds simply. Everything is epic, everything is almost a philosophical conversation between people."

Debus is also not afraid to look at Wagner's technique without prejudice, even when it rubs against conventional thinking. "I said to the orchestra at one rehearsal – they looked at me like, 'What is he talking about?' – I said that actually Wagner is very banal on a certain level. Those leitmotifs, many other composers could have written them, there's nothing highly original there. But when he starts using them as a subtext for his own libretto, and adds meaning through the intersection of music and words – there's the originality, that's something quite special. There's not a single moment where the thread of this story is cut, where he loses that thread. It's absolutely remarkable in that way. So, by the end, you might not feel that 4 1/2 hours have gone by."

For all of his initial resistance to Wagner, which hasn't completely disappeared, Debus has considered his journey through the Ring, especially with Goerke, to have been extremely worthwhile. "As a singer, as a musician, as a mensch – she is absolutely exceptional," he says of the soprano. "It's been so great to really dive into that cosmos and get a real understanding of it – or try to get one. As much as one can ever get an understanding of it. It's been extremely satisfying. Wagner's gods are very human, actually. Just like the Greek gods. They have the same problems that we have – worse – jealousy, betrayal, guilt, lack of self-esteem. It's all there."

Gotterdammerung runs Feb. 2 to 25 at the Four Seasons Centre for the Performing Arts in Toronto. 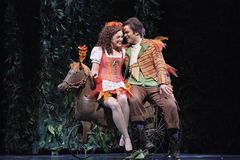 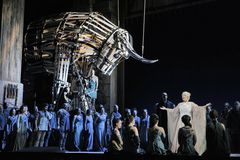 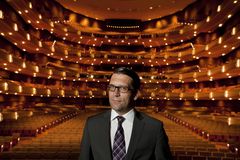