The stage is a sacred place – or at least as sacred as it gets in our modern era. Let me clarify that I mean stage in the broadest sense: at the theatre, of course, but also the shared mic at a stand-up night; I mean a pulpit, a tennis court or a karaoke platform inhabited by a scared first-timer.

Even today, in our self-absorbed social-media landscape, the stage invokes a separation between the performer to be worshipped (or at least watched) and the audience to be enraptured (or at least attentive). It's an age-old understanding, and one to be respected. So I was jarred on a recent Saturday night in Toronto's gay village when this covenant was rudely broken.

As I sat in the audience for a drag show at the bar Crews & Tangos, a young woman invaded the stage. Clad in black, with hair in messy twists, she did a sloppy interpretative dance, followed by a shaky pirouette, interrupting an ongoing performance. She reminded me of Hannah in the first season of Girls, manufacturing moments to prove she'd lived.

The performer, a drag queen named Carlotta Carlisle, continued her lip sync, but kept a watchful eye on this interloper. I marvelled at Carlisle's restraint. When the wannabe finally took a bow, any reasonable person would excuse (or have encouraged) Carlisle for booting that behind right off the stage.

"People think that they hand you a five dollar bill and they get to do as they please, and that's not the case," says Carlisle, who has practised drag for over a decade.

My evidence is anecdotal, but that clumsy patron is one data point I've noticed in a broader trend: too many drag shows now have predominantly straight-seeming white women in attendance. And too many of these newcomers are clueless about the cultural history and norms of the spaces they inhabit, and drag bars are the worse for it.

Bachelorette parties are especially tedious. That night at Crews & Tangos, a party of six women with a sad bouquet of limping balloons at their table by the stage, barely let performers get through a song without interrupting. They waved fives, demanding dances and selfies, eschewing proper drag-show etiquette, which dictates focusing on the performer and giving tips without expecting anything in return.

How desperately they attempted to be seen, I thought – a moment in the spotlight that had to be stolen.

Perhaps the bratty behaviour stems from these women bloating on a diet of television and films depicting gay men fawning over straight women with poor manners. They come to let loose and be adored, anyone else be damned. Carlisle now reads out the rules for the club every weekend she performs. The rules aren't difficult ("keep your belongings and drinks off the stage," for example) but the crowd doesn't care, even when it endangers performers with trip hazards.

Their callousness is most apparent in how performers are treated – Carlisle says she's always being pinched and grabbed in intimate places by inebriated women. "You don't have the right to touch me," she says. "You can stay away." The abuse doesn't only happen onstage: as a fellow audience member, I've also had random straight women pinch my chest, and been reduced to slapping away the hands of drunk women grabbing at my crotch.

It's as if these women feel the need to pass on the violence that is perpetuated on them in some Ring-like fashion, that horror film where victims must share a haunted videotape with another person to be spared death.

"For some of them it feels as if they're taking back their double standard: 'I've been treated this way so I get to treat you that way.'" says Carlisle. These women want the safety of a space not dominated by heterosexual men, but without the responsibility of following the rules or acting appreciative. "But you didn't enjoy being treated that way, so why would you want to pass that off onto someone else?"

The disrespect to drag performers is hypocritical given that many of these women come as fans of the reality TV competition RuPaul's Drag Race. The show, now in its ninth season, continues host and creator RuPaul Charles's work exposing drag to mainstream audiences.

But even RuPaul had words for straight women in queer spaces, which she shared recently on the podcast The Dinner Party Download. "People who live in the mainstream and the status quo think that everyone else is there to serve them," she said. "Just because your limited view is that everyone's there to serve you and that you're the only person in the world, it doesn't work that way."

Drag Race has featured outsider queens: Performers who aren't tethered to conventional depictions of femininity. There's Milk, showing off genderqueer mustachioed looks and Nina Bo'nina Brown, transforming into a living peach. But at Crews & Tangos, the interest from the weekend crowd is much more normative. "The weirdos, they get ignored on the weekends," says Carlisle, who personally does "an old-school kind of drag: it's a lot of hair, a lot of makeup, a lot of sparkly stuff."

She says that sometimes straight women actually turn their chairs away from non-traditional drag performers, not bothering to even pretend to pay attention. These women prefer a comfortable kind of drag, one that reaffirms their status in life and doesn't challenge them in any way.

That's also seen in how the heteronormative world is following them into our safe space: Straight men, realizing the attendee mix has changed at queer bars, now come to hit on drunk straight women. Not only do they further dilute the space, but it also means lesbian patrons must deal with the discomfort of being approached by them. Straight, white women colonizing our spaces makes them more dangerous for us.

The queer bar itself is a sacred space: People risked public humiliation, social ostracization and police violence for the chance to build a community. Pioneering places such as the Continental and St. Charles Tavern, some of the earliest queer spaces in Toronto, were created by and for LGBTQ-identified people with literal blood, sweat, and tears. Straight, cis-women did not fight nor sacrifice anything for our spaces.

All are welcome at the queer bar, I mean it. But attendance requires embracing and respecting queer culture. If you don't come in with an understanding of the history of our spaces, at least recognize that our experiences are not yours. Tourism isn't necessarily a bad thing, but don't overstay your welcome.

Maybe we should even take the tourist concept further with an idea inspired by my friends, recently back from Cuba. There, everything has two prices, one for locals another for foreigners. Maybe this could help bars offset those high Church Street rents: yes, thank you for coming, that bottle of beer will be 30 Straight Girl Dollars.

Carlisle remains optimistic and positive, set on education. She believes that if people knew the trials and tribulations of performing drag they'd be more respectful to those who do it. "My job is amazing," she says. "I get to dress up and play pretend and play make-believe for a living. I love that I get to entertain."

But even she has a limit. "I tell everyone: I want you to have fun but if you don't follow the rules this turns into the Toronto Zoo," she says. "The animals will attack." In other words, have some respect for the stage – before you actually become the centre of attention.

Jaime Woo is the author of Meet Grindr and an editor of Feel Your Fantasy, a fanzine about RuPaul's Drag Race. 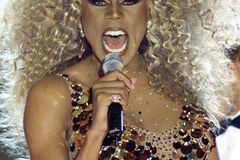