Some years, it's difficult to find a common theme in the work at Toronto's SummerWorks Festival, but this year it was difficult to escape one.

Fears about fertility and the future aren't buried but on the surface of some of the most-talked-about new plays, such as d'bi.young anitafrika's Bleeders, Georgina Beaty's Extremophiles and Ghost River Theatre's adaptation of the Ray Bradbury short story Tomorrow's Child.

In a way, you could say anxieties about infertility have always been at the heart of drama. After all, the Western idea of theatre was born at a festival in ancient Athens devoted to the worship of Dionysus, the god of fertility as well as wine, that also included processions of citizens carrying phalluses.

A search on Google News this week is proof procreative worries have morphed but endured – pulling up headlines from How your washing machine could be damaging fertility to Backstreet Boy Kevin Richardson Reveals Infertility Struggle to Drop in canine fertility may be due to environmental contaminants.

And our fears may be justified: One in six Canadian couples currently experiences infertility – a number that has doubled since the 1980s. Is this simply because of societal shifts toward having children later in life – or do the degradation of the environment and our chemical lifestyles play a role? Will things get worse?

Bleeders, an invigorating, dystopian musical by the dub poet and playwright d'bi.young, imagines so. It begins in the present with a group of women protesting the Pickering nuclear station. "Reaping the blood of mother nature, sterilizing the womb, mining the minerals, poisoning the water," they chant, weaving through the audience, performing an African-inspired dance.

Led into the theatre, the audience is transported to a future in which "the bleeders bleed no more." There may, however, still be one fertile woman still out there – a chosen one named Lakumi (a solemn Sashoya Shoya Oya).

The plot of Bleeders initially makes you think of P.D. James's 1992 dystopian novel The Children of Men – but stylistically, d'bi.young has forged her own original genre, which she calls the Afro-futurist dub opera.

Her imagined future may be scary, but it's very catchy. Our heroine finds fertility by going on a vision quest – helped by highly symbolic animals such as a crow, a monkey and an elephant, the latter played with grace and gravitas by an exceptional singer and actor named Nickeshia Garrick.

Lakumi's journey is told with little dialogue and lots of song. The protest-chant lyrics – a cross between Bob Marley and Bertolt Brecht – are very to the point: Humanity has destabilized the planet, and is finally (not) reaping what it has sown. "Climate change is coming for you!" chants Coyote, played by shape-shifter of a dancer Ravyn Wngz. "Change your ways – we are living in the final days."

Though dealing with similar subject matter, Beaty's one-woman show, Extremophiles, is quiet and contained – and deeply unsettling. Beaty sets her play in that great place of the Canadian imagination, the North – only, in the year 2020, it is now a desert. Margaret and her baby are being protected (or perhaps quarantined?) there, studied by a group of scientists and a young anthropologist named April – who soon slides over the line from observer to participant.

A little more than nine months earlier, all the women in the world – or Toronto, at least; the details, throughout, are sketchy – became spontaneously pregnant, something to do with an airborne fertilizer and an unexpected chemical reaction. Those that didn't visit the abortion clinics the government quickly set up on street corners soon miscarried bundles of seaweed. But Margaret carried something even stranger to term, which we gradually realize is living in the tank she sits perched on the edge of while telling her story.

Beaty plays both main characters with an impressive distinction in physicality and voice. Director Watson and a team of designers – Patrick Lavender, Erin Fleck, Sarah Fairlie, Christopher Stanton – suggest the weird world around her to life simply and effectively. You can see the influence of dramaturge Karen Hines on the darkly comic flavour of Beaty's text – and, at times, you may be reminded of the collaborations between monologist Daniel MacIvor and director Daniel Brooks. Margaret calls her presentation a number of things at the start – a dissertation, a freak show, a hallucination – but tonally she hits it on the head with eulogy.

The worry that humanity may have messed up the world too much – and that it will come back to bite us in the babies – is not a new one, of course. You can rediscover how we feared the future in the past by going to listen to Tomorrow's Child – which was written in 1948, but set in 1988.

In Bradbury's short story, a couple visits a birthing centre and uses the latest technology to bring a child into the world – but, because of a malfunction of the equipment, their baby is born into another dimension. In ours, the little boy, Py, appears as a glowing, blue pyramid.

If you're wondering how the Calgary company Ghost River could possibly stage this, well, Tomorrow's Child is an audio play presented in an immersive environment. Audience members are blindfolded and led into a room surrounded by speakers – you listen to the play and the visuals all unfold in our minds. Created by Eric Rose, Matthew Waddell and David van Belle, the audio is of excellent quality.

Bradbury wrote his story 30 years before the first "test tube baby" was born, and long before the common use of IVF and fertility drugs. He was reflecting the concerns of the nuclear age – and a fear of mutants. But Tomorrow's Child differs from Beaty and d'bi.young's shows in an optimistic tone that reflects the age Bradbury was living in . Today, his story seems now more an allegory for giving birth to a child with a disability or anything that might make him or her or they have trouble fitting into this world. And Bradbury suggests that the answer is for parents to learn that it's they who have to change, not their child.

Both Beaty and d'bi.young's plays, however, suggest that personal change won't be enough for the kids to be all right – it's the world that will have to change, if it is to continue.

In Bleeders, Lakumi can only regain her fertility when she accepts her own part of the responsibility for the environmental state of the world. "It's not me, it's them," she says at first. Then: "Not them – we."

SummerWorks play illuminates life in the shadow of the Islamic State
August 12, 2016 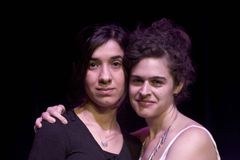 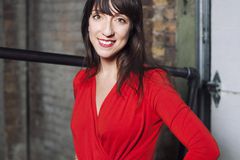