Traditional flamenco always looks like flamenco. Putting themes to the dance is generally a square-peg-round-hole exercise.

The better way to judge a traditional flamenco concert is by the skill of the artists and the impact of the total presentation – which makes Esmeralda Enrique's 30th anniversary show a hands-down winner.

True, there is the attempt at a theme here: The show is called Aguas/Waters, and each piece has a water focus. But in the end, only two works evoke this concept. The rest look like, well, flamenco dance.

Among the successes is the show's opening piece, Mar. It features Enrique dancing with a long yellow scarf, which trails over both her arms, allowing her to make graceful, wavelike motions.

Sendero, a showcase for longtime company member Ilse Gudiño and formidable singer Niño de Elche that opens the second act, is another. In this piece, the singer sits on a small staircase, a ribbon of blue and white material trailing down the stairs and along the floor. His mournful yet gentle sound propels the action as Gudiño, her hair down, performs a lyrical dance filled with beautiful wave-like arm movements and deep back arches. She ends up on her knees near the ribbon, and when she stands, picking up a long white scarf, she does evoke the sea.

But both Sendero and Mar are more balletic than flamenco. And no matter how lovely these two dances are, the crowd had come to see the virtuoso foot stomping that is the hallmark of flamenco.

They weren't disappointed. Enrique's four dancers – Paloma Cortes, Angela Del Sol, Gudiño, and newcomer Noelia La Morocha – are very skilled. They have the upright carriage, the flying feet, and the expressive arms every flamenco dancer needs. Enrique herself is a marvel of movement, and even as she enters middle age, she can still dance anyone off the stage.

And then there's the charismatic Juan Ogalla. This is the fourth time he's come from Spain to choreograph and dance with the company, and once again, he's riveting: From the famous pose of a matador, elbows raised to shoulder level, back arched, legs taut, he breaks out into dazzling footwork, his arms never losing their matador stance, even in turns.

The smouldering Ogalla choreographed four numbers in all, three for himself and company members and one solo. In the solo, Permanencia, he has a great time playing with both the musicians and the audience. He teases with simple tapping like the sound of a woodpecker – then follows with a torrent of rapid footwork that includes stamping, hopping, turning and jumping, almost too fast to take in, his face always fiercely focused.

As usual, the musicians are first-rate, and there is live music for every number. The talented ensemble includes music director and guitarist Nicolás Hernández, cantaors Francisco Contreras and Manuel Soto, guitarist Oscar Lago, percussionist Rosendo "Chendy" León, and violinist Chris Church. The singers in particular drive the dance with their passionate voices.

Enrique knows how to put on a show, too. Jacob Niedzwiecki designed video projections on the back wall that continue throughout the performance. Some are moving pictures of waves breaking on a beach, or the swells of the open sea. Others are ribbons of moisture dripping down a window, or abstract images that flow together or move apart in kaleidoscope fashion. Sharon DiGenova's lighting is masterful, in both mood and effect.

There are no bows until the end, which allows Enrique to design the dramatic arc of the show. In the first act, the serious and intense flamenco numbers are sweetened and lightened in the middle by Arroyo de la Miel, a charming dance for Del Sol and La Morocha wearing batas de cola, or dresses with long, ruffled trains. The art here is the famous "kick" that manoeuvres the train where the dancer wants it to go. The second act has the much anticipated extended solos of Enrique and Ogalla.

Both end with fiery company numbers – and with well deserved lauding from the audience. This 30th anniversary flamenco concert is a class act from start to finish. 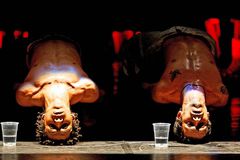 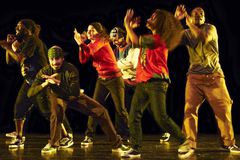 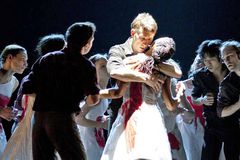 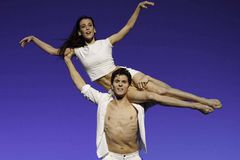