Half a century before Freud started writing on women, hysteria and repression, the Romantics were already obsessed with gendered approaches to madness and desire. For women, sex, emotion and sanity were thought to be part of the same delicately calibrated equation: Offset one and the balance was destroyed.

Enter Giselle, the 1841 pinnacle of late-Romantic ballet. In Act 1, a peasant girl goes mad and commits suicide once she's betrayed by the man she loves. Turns out, hers is hardly an uncommon fate. In Act 2, Giselle rises from her tomb to join a pack of dead young women who've all been left at the altar by faithless men.

In long diaphanous tutus redolent of wedding dresses, these vengeful ghosts (or Wilis) have become an enduring image of Romantic ballet. Picture a string of ethereal Miss Havishams on pointe shoes – predatory victims, as beautiful as they are cruel. This second half of Giselle is riveting in the National Ballet's current production of Sir Peter Wright's 1970 adaptation; it's 50 minutes of chilling, virtuosic dancing in which my goose bumps rarely dissipated. Act 1 feels a little workaday by comparison, and this isn't entirely the company's fault.

Written by Théophile Gautier in 1830s France, Giselle often feels like two different ballets placed back to back. Act 1 is an exercise in lucid storytelling with clear motivation: Giselle meets the Count Albrecht and completes an emotional trajectory of desire, bliss, fury and grief. Act 2 exists in a world where the rules of verisimilitude have been tossed away. Instead, we get a landscape in which the internal and supernatural are powerful and present; plot is replaced by a physical reification of sorrow, memory and regret. Adolphe Adam's score echoes this transition; it's rich and ambient in the Wilis scene, but a bit thin and unmemorable in Act 1.

What makes former Bolshoi ballerina Svetlana Lunkina ravishing as the dead Giselle is, interestingly, what makes her less effective as the living one. Lunkina is lyrical and demure as a performer; there's a quality to her dancing that is almost diaphanous itself – jointless and papery. In Act 2, she has a hauntingly impassive stare that speaks volumes on Giselle's character; unlike the blood-thirsty Wilis, she is determined to forgive. Lunkina's ability to move weightlessly through complex grande allegro, her back leg lifting high on reflex, is a feat to witness. Drifting into the sleepy third arabesque so distinct to Giselle (the dancer nearly rests her head on her upper arm), Lunkina's body seems to float on air.

I also found Lunkina convincing in the famous Act 1 mad scene, in which she terrorizes the peasants with Albrecht's sword before plunging it into her own heart. But I found that, as a young girl hungry for experience, she was a bit short on exuberance and the accompanying physical robustness needed to bring the character to life.

Harrison James, just promoted to principal dancer, is in many ways the perfect Albrecht: elegant, princely, technically immaculate. When the Wilis condemn him to dance to his death, James is breathtaking in his inexhaustible execution of entrechat six – these are jumps that require the dancer to switch the position of his feet six times in the air, then repeat for several phrases of music. James is a near flawless turner, ending long sequences of pirouettes with a suspended arabesque balance. But, not unlike Lunkina, I think he had more room to explore Albrecht's character in Act 1. I longed for a glimpse of the mischief that provokes the Count to dupe and seduce a village girl. And while the Act 2 pas de deux had an emotive, slow-motion quality, the chemistry between the lovers could have used a little charge in Act 1.

One of the ballet's finest performances came from Heather Ogden as Myrtha, Queen of the Wilis. Ogden was formidable in the role, poised and imperious, without letting this fierceness devolve into caricature. She was beautifully grounded, executing seamlessly powerful jumps and making full use of her long, imposing extensions. Piotr Stanczyk also deserves mention for his interpretation of Giselle's scorned suitor Hilarion, evoking all the necessary suspicion and rage.

Can 2016 audiences stomach a work of art that paints women as victims-turned-predators, eternally mourning the betrayal of disloyal men? In the ballet world, it's not fashionable to ask these questions of the classics, which we are expected to worship as artifacts of old mores. Giselle has been all over major ballet stages this year; it closed at Covent Garden in April and is currently being performed by the Paris Opera Ballet. The beauty of Act 2 is pure and piercing, but I enjoy it with a pang of guilt. 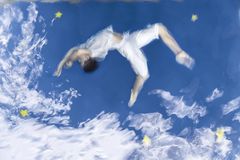 National Ballet of Canada: A pairing of Balanchine and Ekman
March 10, 2016 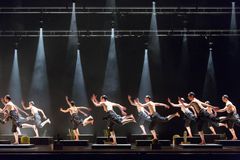 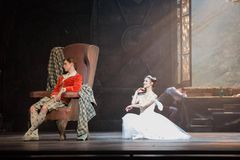