Teresa Przybylski designed two of the most stunning sets seen on a Canadian stage this year – just don't call them "sets."

"I like 'environment' – that's how I think about the stage," the 63-year-old diminutive designer says, over coffee in the home in Toronto's High Park neighbourhood she has lived in since immigrating to Canada in 1984. "You create an environment that in some simple way tells people the background for the story, or makes the right statement for the story."

Well, okay then: Przybylski created the most extraordinary environments at Ontario's Stratford and Shaw festivals last summer – ones that were not only lovely to look at, but which helped me see two familiar plays by famous Irish playwrights from fresh new angles. But whether her designs were "simple" is open to debate.

For Jennifer Tarver's production of Waiting for Godot at the Stratford Festival, Przybylski certainly embraced clarity and concision – designing an elevated, chalky road that wended its way down the long, thin Tom Patterson Theatre stage, cutting through a pitch-black abyss. It was a perfect visual distillation of playwright Samuel Beckett's view of life, expressed within the play with the beautifully bleak metaphor: "They give birth astride of a grave, the light gleams an instant, and then it's night once more."

But at the Shaw Festival, Przybylski's work on a production of Lady Windermere's Fan directed by Peter Hinton was a gorgeous of the jaw-dropping variety.

The look of each of the four acts of Oscar Wilde's 1892 comedy was matched up with a different painting by one of the playwright's contemporaries. The journey of the title character – a young mother (played by Marla McLean) who suspects her husband is having an affair – from seeing the world in cut-and-dried, moralistic terms to shades of grey was emphasized by a move from the visual world of James McNeill Whistler (who famously idealized motherhood in the painting commonly known as Whistler's Mother) to that of Mary Cassatt (who painting motherhood in all its realities).

A nighttime scene inspired by Paul Gauguin had me gasping out loud at its sumptuous beauty, but Przybylski says it nevertheless hewed to her minimalistic design philosophy. "It was opulent in some ways, but it was simple in many ways too," says the widowed grandmother of four, for whom design has, on past projects such as Tarver's 2009 production of Zastrozzi at Stratford, meant stripping away set pieces until all that is left is a bare stage.

In describing the stage as an "environment," Przybylski, who also teaches at Toronto's York University and is currently serving as chair of the theatre department there, is thinking as much as an architect as she is as an artist.

Born and raised in Poland, she first received a degree in architecture before studying scenography at the Fine Art Academy in Krakow in the 1970s. Ask her what her family thought of that career shift – and she will give you an amused look and then laugh: "In Poland, being an artist at that time was not like a death sentence."

When martial law was declared in her homeland in 1981, however, Przybylski and her husband Jerzy – an architect as well, who would later be known as George in Canada by colleagues such as Jack Diamond – were living and working with their two children in Germany and eventually decided to make the move to Canada.

Though the dislocation initially meant Przybylski returned to architecture, working for Crang and Boake and then Quandrangle Architects, she soon began designing for theatre again, making waves with shows with Theatre Smith-Gilmour and a 1988 production of Woyzeck at Canadian Stage created by puppeteer Felix Mirbt.

In 1994, she made her Stratford debut with a memorable production of The Comedy of Errors directed by Richard Rose. That was on the Tom Patterson theatre stage, and Waiting for Godot brought her back to that space, transforming it into a kind of windup, mechanical environment, with Tom Rooney and Steven Ouimette's Vladimir and Estragon as a pair of jewellery-box dancers stuck in an endless pas-de-deux of impatience.

"The image that we had was of an audience coming in and putting a coin in the slot, then the action starting up," says Tarver, who describes her design partner as "very sophisticated, with nothing showy or flamboyant about her."

The constricting Tom Patterson is a perplexing one for many directors and designers due to its bedevilling sight lines, but Przybylski adores the space and its direct and intimate connection to audiences. "I find that restrictions liberate," she says, which explains why she has worked most often in recent years with Tarver, probably North America's top interpreter of the less-is-more works of Beckett.

A less obvious match for Przybylski was Hinton, a director known as much for his intellectualism as for his grand visual flair. The two had only worked with each other on one major production before, an ambitious Mother Courage and Her Children at the National Arts Centre and Manitoba Theatre Centre, where the direction and the design never quite synced.

Lady Windermere's Fan, however, was a masterpiece, a production that found moving depths in a play most often celebrated for its glittering surfaces. Says Hinton of collaborating with Przybylski: "She comes to the work without preconceptions, and that's what I really loved. I didn't want to fall into traditional tropes of what an Oscar Wilde play might look like."

For Przybylski, the prime challenge with the show was how to literally add depth to the two-dimensional pictures that Hinton was inspired by. She particularly relished the logistical challenges involved. She installed two revolving platforms in Shaw's Festival Theatre, one rotating into each wing, to allow for quick changes and also invented a system of steel frames covered in black fabric to realize Hinton's dream of a lens-like "aperture" that would only show parts of the stage to the audience at a time.

"That show was fascinating," says Przybylski, praising the technical skills of the Shaw's painters and shop workers. "Design is blah, but the fact that you had to put it all together … I think I was an architect in that project." 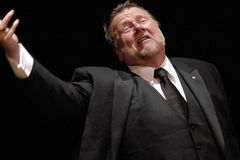