This is one of those tales that if you read it in a book – or saw it in the theatre – might sound a little too perfect to ring true.

Electric Company Theatre co-founder Kim Collier was looking for a play to do in an intimate, onstage setting, where the audience would be embedded in the action. It was an idea she'd been kicking around for years and there was an opening in schedules: hers, husband/collaborator Jonathon Young's and the Electric Company's.

Which play to do? She began looking through the enormous collection she and Young had inherited when former Electric Company Theatre society president Pat Armstrong died in 2000. Collier was thumbing through works by Ibsen and Chekhov when she inadvertently scooped up a small, dusty book from her overflowing shelves.

"I definitely think the universe put that play in my hand," Collier said during a break from rehearsals last week. "I think it's one of those signs."

It was Tad Mosel's Pulitzer Prize-winning 1960 play All the Way Home. Collier hadn't read it, but Mosel's note on the setting ("the characters move from room to room, in the house or out of the house, without regard to placement of doors") seemed a good match for her vision of a house onstage, which the audience literally shares with the cast.

"I opened it and I read the stage directions from the author and I couldn't believe it," says Collier, who won the prestigious Siminovitch Prize in 2010 and who is now associate artist with Canadian Stage in Toronto. "I was just like, 'Oh my God, it's perfect.'"

She kept reading. The play, set in 1915 and based on James Agee's novel A Death in the Family – which also won the Pulitzer – is an intimate multigenerational portrait of a family blindsided by grief.

Collier was struck by a first-act conversation between husband and wife, Jay and Mary, in particular this monologue from Jay: "We come from people, Mary, and in time they fall away from us, like Great-Granmaw. We give birth to others, and in time they grow away from us, like Rufus will. When we're about eighty years old, you'n me, all we'll have left is us. And that's what I believe in. Maybe that's it. Maybe that's where we're heading – to each other."

Collier looks up after reading the passage. "That's the part that sold me on wanting to produce the play," she says. "It's so simple and it's so powerful."

The impact of these words can't be overstated. Collier came across the play after she and Young lost their daughter Azra, 14, in a fire.

"I think this just resonated so powerfully to me, that people come and they go. ... I found that really striking and I didn't even really notice that there was a death in this play, but I think because death was – is – residing in every cell of my body, what I really saw was the other things."

Collier had her play, which has a limited run at Vancouver's Queen Elizabeth Theatre this week. The audience – 140 capacity a night – will be seated onstage on pillows, low benches and era-appropriate chairs, encircling the action and sometimes tucked right into it, sharing the kitchen table or living room with the actors (Collier directs a stellar cast, which includes Young, Meg Roe, Gabrielle Rose and Alessandro Juliani).

The unusual set is designed by Marshall McMahen – and here once again the universe comes into play. Shortly after Collier asked McMahen to join the project, he went on a family hiking trip in Washington State's Cascade Mountains. They stayed in an old mountaintop fire-watch cabin, which had a little bookshelf and six books. One of them was A Death in the Family.

"I never thought of saying no to the project," says McMahen. "But now even if I wanted to, I couldn't."

McMahen was tasked with not only creating the set, but also the audience seating in, around and through it. "You're not working with quarter-inch plywood; you're working with the bodies of your audience," he says.

There's another almost-too-good-to-be-true storyline surrounding this production and it has to do with supporting the next generation of the theatre family. Collier met McMahen, now 25, when the Electric Company hosted an open house for young theatre types looking for advice and information. When this project came to life, Collier wanted to use an emerging designer and remembered McMahen.

The Electric Company was formed in 1996 after premiering the show Brilliant! at the Vancouver Fringe Festival. A local theatre stalwart was in the audience, loved the show and the next day called Collier and Young, urging them to form a company. The caller was, as Collier refers to her, "the extraordinary Pat Armstrong."

All the Way Home is at Vancouver's Queen Elizabeth Theatre Jan. 10 to 14 ( electriccompanytheatre.com).

All the Way Home: Seats so close you can see the actors sweat
January 12, 2012 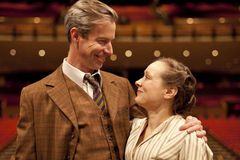