There's lots of sex in Hannah Moscovitch's new play Bunny, currently at the Stratford Festival, but one episode stands out in particular because it occupies a grey zone on the question of consent.

As an undergrad, Sorrel, the narrator, has an affair with her married professor. He takes her to a hotel that she doesn't like; the seediness of its decor seems to externalize her feelings of moral turpitude. Her shame leads to an argument that has the professor put back on his clothes. But Sorrel, who's just 19 or so and stewing in all kinds of potent, conflicting feelings – not least of which is straightforward arousal – says she's not leaving until they've done what they came to do. She starts taking off her dress. She pushes the professor against the wall. When he says, "Stop," she says, "I don't think you mean that, or at least not enough." She persists and, after a few moments, his resistance becomes acquiescence and then enthusiastic participation.

Watching this scene, I found it impossible not to wonder what it would look like if role and gender were reversed – if the woman had said no and the man had pushed her up against a wall and said I don't think you mean that. I doubt I would have questioned for a second that I was witnessing an act of assault. But as it stands, the episode barely registers as anything beyond playfully aggressive foreplay. (In fact, I had the company forward me the script just to make sure I hadn't elaborated the ordeal in my head. I hadn't. The professor says Stop three times before Sorrel tells him he doesn't mean it and keeps going.)

Double standards such as these are the heart of the play, which centres on a beautiful, libidinous woman who feels deep shame for having the kind of sexual appetite that a healthy man might boast of. But what Moscovitch does with double standards in this episode – and what should we call the episode? Persuasion? Violation? Assault? – provokes some of the most uncomfortable questions a play has asked me in a while. In the realm of sex, are the ethics so inside-out for women that a morally (and perhaps criminally) questionable act can go virtually unnoticed? Have double standards on sexual behaviour produced double standards on accountability, too?

Cheering for Sorrel feels so good, so right, but the costs of cheering go further. Her promiscuity is not a victimless expression of free love; there is collateral damage by way of the boyfriends and wives who are betrayed by it. She conveniently elides the shame of promiscuity, which comes from external judgment, with the shame of deceiving other people, which she authors herself. Then the men that she dates, sleeps with and marries are tinged with a shade of satire; they are disposable girlfriend and sister roles reincarnated as men – characters with simple motivations and open hearts, who fall instantly in love and cry on stage. What we end up with is half feminist utopia, half abject nightmare, a through-the-looking-glass world where the characters are as confused about what's right and good and genuine as we are.

Moscovitch reminds me of Alice Munro here, a writer who has always been so good at making readers love and forgive her flawed female characters. The protagonists of Munro's stories make morally questionable choices – often conscience-free – in pursuit of some of the joy and sexual pleasure that is automatically afforded men. This involves all kinds of deception of spouses and backstabbing of other women. In two of my favourite stories, Friend of My Youth and Something I've Been Meaning to Tell You, it means the brutal betrayal of a sister.

But the story that came to mind watching Bunny was Munro's Differently (from the 1990 collection Friend of My Youth) and not for any big theme or idea, but because Moscovitch uses a technique that's distinctly Munro-like. She gives us a tiny, blink-and-you-miss-it detail that changes our moral engagement with the narrative.

Sorrel's small transgressive act – her appropriation of the you-know-you-want-it rape talk – functions a lot like the moral blind spot at the centre of Differently. Georgia, the story's protagonist, is having an affair that spurs a sexual reawakening. She shares Sorrel's appetite for physical gratification outside the constructs of love and, also like Sorrel, she wonders whether other women are secretly being "driven hard and gloriously" out of their minds in backseats of cars and dimly lit parks. But Georgia commits a misdemeanour that haunts the story the same way Sorrel's transgression haunts hers: In a fit of suspicion and jealousy, she goes out in search of her lover, leaving her children alone in the house at night, the doors unlocked. Nothing happens, but anything could have, and Georgia barely registers her good luck.

What's interesting about these moral blind spots is how subtly and viscerally they signal the fact that something is not right. Munro is hinting at the danger of merely flipping the paradigm about gender, sex and power. Disempowerment is more complex than this, its effects are psychic and profound, and double standards are difficult to simplify. Moscovitch knows this, too, and it's what makes Bunny so much more than a morality play on female sexual liberation.

Theatre Review
The Glass Menagerie is an unremarkable but intimate production
September 2, 2016 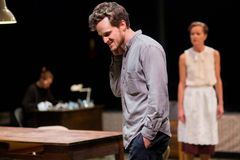 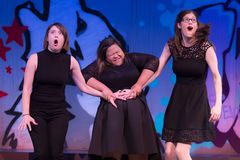 National Ballet’s apprentice program takes the best from around the world
August 26, 2016 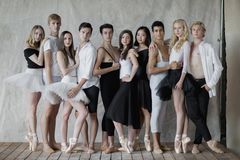