Stephen Harper has been playing the piano again. There he was on keyboards at the Conservative caucus Christmas party in Ottawa this week, displaying his deep connection with the cultural engagement of ordinary Canadians by covering Guns N' Roses more or less competently.

The appearance was no less calculated than his government's announcement the following day that it is footing the entire $110-million bill for an important renovation to the National Arts Centre in Ottawa, but I am not being entirely facetious about the connection between an amateur musical performance and the electorate's cultural engagement.

Harper got himself in hot water during the 2008 campaign when he responded to a question about cuts to the arts by suggesting that "ordinary people" could not relate to complaints about diminished subsidies from types whom they saw at expensive televised galas. His attempt to brand the arts as an elite concern played particularly badly in Quebec; some analysts believe the quote cost him a majority in that election. Many outside Quebec were equally unimpressed: Surely ordinary Canadians, with their garage bands and their dance lessons, are as appreciative of the arts as any elite.

Harper got the message fast and has been regularly photographed at the keyboard ever since, showing that he's just an ordinary, arts-loving guy. Culture minister Shelly Glover said as much as she commented to The Globe following the NAC announcement: "He does represent so much more than what you see on television. He is a man who is dedicated to the arts and culture of this country."

The NAC reno, which is scheduled for completion during Canada's sesquicentennial year in 2017, seems to play nicely to the government's interest in national symbols: The money is part of a previously announced $190-million package for repairs to "heritage and museum sites." The other $80-million will be used to fix Ottawa's Canada Science and Technology Museum. (That building, a former bakery warehouse dating to 1966, is so decrepit it is currently closed because of problems with mould.)

The most significant aspect of the NAC renovation is the relocation of the centre's main doors from the rear of the building, overlooking the Rideau Canal, to the front on Confederation Square. The low terraced structure of interconnecting pods has many modernist strengths, but has long been justifiably criticized for its confusing lack of a front entrance. Now, in a move both symbolic and practical, it will face the War Memorial and look toward Parliament Hill. The architects' plan to wrap the existing building in glass looks sensitive and sensible, and the choice of Diamond Schmitt, the firm that built Toronto's Four Seasons Centre on time and on budget, is a sound one.

What is new for this government – and harkens back to the Liberals' Centennial-fever cultural spending that built both the NAC and the science museum – is that it will pay the whole bill rather than asking the centre to raise part of the money privately.

You can gripe that the government milked its $190-million by bundling it into several announcements; you can point out that the science museum doesn't just need a new roof, it needs a whole new building, preferably in a more central location than St. Laurent Boulevard in Ottawa's east end. But the NAC project is a smart and necessary move, appropriately rewarding a thriving national cultural institution. Add to that the way the government has always spared the Canada Council in recent budget cuts and you might say that Harper is indeed a man dedicated to arts and culture of this country.

Trouble is, the culture of this country also resides in the CBC, the National Film Board and the film funding agency Telefilm, all federal institutions which are, at very best, badly neglected by the current government. At very worst, the disproportionate cuts to the CBC are also evidence of an ideological assault on public broadcasting that the government doesn't have the courage to actually debate with the electorate.

So, it is only the Tory base that gets treated to tough talk about the perfidious CBC, while the rest of the electorate gets the NAC reno and stable Canada Council funding. Perhaps the Christmas party performance is more evidence of Harper's dedication to the arts; it's certainly more evidence that the man is contemplating a spring election. 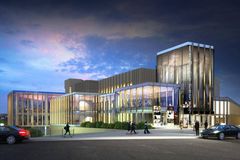 Culled works of art from the AGO head to auction
December 9, 2014 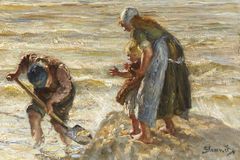 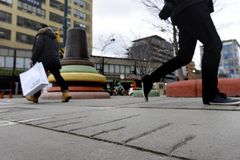