There is a certain calibre of celebrity who, though lacking any meaningful association with the world viticulture, can nonetheless lend their name to a bottle of wine. Wayne Gretzky is such celebrity. As are Dan Aykroyd, Drew Barrymore, Mike Ditka and heavy-metal guitarist/legendarily reckless alcoholic Dave Mustaine. So, too, is Jeff Dunham, the 54-year-old, mega-wealthy ventriloquist and comedian.

In his boundless munificence, Dunham lends the names and faces of his puppet pals to a line of mid-range wines, including the Bubba J Cabernet, the Walter Trutina, the Peanut Riesling and, most curiously, the Achmed Syrah, a $35 (U.S.) bottle, the tasting notes of which speak of "enticing aromas of blackberry bramble, cedar cigar box …" and that comes emblazoned with the half-sinister/half-silly image of a scowling skeletal puppet named Achmed the Dead Terrorist. And so the question naturally arises: What would the charred remains of a jihadi suicide bomber taste like, were they turned into a puppet, and were that puppet a wine?

There were, sadly, no bottles of the Achmed Syrah among the overpriced merch being peddled at Wednesday evening's Jeff Dunham show at Toronto's Air Canada Centre. Still, the Jeff Dunham brand was in full effect, in the conspicuously consumable form of T-shirts, hats, bobblehead dolls and, most prominently, Dunham himself.

For anyone not disposed to this kind of stuff, thinking (and writing) about Dunham poses a challenge. To mock it outright seems not only easy and unkind, but a category mistake: like critiquing a half-eaten Wendy's Baconator found on a bathroom floor as if it were a choice filet. What's curious is not whether or not this kind of thing is truly funny, but how such a hacky, and seemingly unfashionable, act such as ventriloquism has managed to wedge itself in the mainstream culture, creating a whole micro-industry of DVDs, comedy specials, wines and other paraphernalia built around Dunham and (as he calls them) "the little guys in the boxes."

The night's preshow includes a slide show of Dunham trivia, hyping up an artist who (at least for the thousands of fans assembled) needs no hype. A series of factoids flash across the big screen. Fact: Dunham is a licensed helicopter pilot. Fact: Dunham and the gang have accumulated nearly one billion views on YouTube. Fact: Dunham was voted most likely to succeed in high school. Nearby, someone remarks, nonchalantly, "This guy's number one in the world." It's not so much a boast, or even an opinion, as a matter of fact.

When Dunham takes the stage, he's met with ovations and applause that are de rigueur at this kind of big-ticket comedy cavalcade. He opens with an overlong, puppet-less stand-up set about the recent birth of his twin sons, the horror of that process and the ickiness of hooking up his wife to an electric breast pump. There are plenty of mildly self-deprecating barbs, coming at the expense of a man whose success allows him to be self-deprecating; e.g., at one point he makes a joke about being poorly endowed – but only compared to a gynecologist's arm. Like the boastful preshow factoids, these bits work to establish Dunham's persona as a kind of all-American success story, an over-dog.

Dunham's career may seem like the stuff of Horatio Alger. A regular middle-class kid from Texas works hard and toils and achieves massive success and tens of millions of dollars as perhaps the unlikeliest thing of all – a professional ventriloquist. It's a shtick that should have died off with vaudeville, fading out of the entertainment lexicon along with minstrel shows and mustachioed strongmen hosting trapezoidal weights. Yet in Dunham's hands, the art, such as it is, endures. He has beaten back against the currents of history, and the tides of good taste, carefully crafting an unfathomably profitable métier making slightly edgy, just-off-colour-enough jokes. With puppets.

In his 2010 autobiography, All By My Selves, Dunham expresses a full awareness that the nature of his act affords him a certain latitude. "These little guys get away with verbal heresy," he writes. "There's some sort of unwritten rule that allows my formerly inanimate characters to say things that humans can never get away with."

Even at the massive, packed, hockey-arena scale at which it occurs, there is a sense that a Dunham show is just that: a place where people are getting away with something. For an evening in the middle of the week, the ACC is transformed into a non-P.C. zone, where Dunham, talking through his puppets, speaks on behalf of some silent majority. There are bits about nagging shrew wives (courtesy of the grump puppet Walter), miscegenation (via the dopey redneck dummy Bubba J), and Arab women having goatees (reserved, of course, for Achmed the Dead Terrorist). There are comments about the oppressive regime of political correctness and how "the racial stuff is so touchy these days."

Of course, this stuff isn't edgy or provocative so much as just bad. To take another example, it's not that it's impossible or gauche to make a joke about Hillary Clinton. But when Walter snipes that she'd have been unfit for the presidency because she's a woman, and so given to the apparent hysteria associated with menopause, it's hard not to groan.

These are the sorts of jokes Dunham trades in: stock bits about women, gay men and the Arab world, made funny (or "funny") by virtue of being delivered by his excitable little sidekicks. While the puppets abused their capacity for "verbal heresy," Dunham himself stood to the side in mock disbelief, all, "Walter! Stop that!" But then the audience would laugh at a particularly nasty joke and Dunham would bait them by saying stuff like, "I knew you were a sick crowd!"

Perhaps it's no surprise the world's most popular ventriloquist proves so adept at speaking out of both sides of his mouth. At one point in the solo stand-up routine, he jokes about how proud he was to see his daughter speeding on an L.A. freeway. He then immediately qualifies it by saying he doesn't condone reckless driving. It is exasperating. The mind howls, aggrieved, "No! Do! Condone it! Believe in something!"

Where many other American comedians operating at the highest levels of popularity and profitability (Dave Chappelle, Chris Rock, Amy Schumer, even middle-of-the-roaders such as Kevin Hart and Jerry Seinfeld) possess something close to a perspective, Dunham has none. He's like a guy reading old joke books. But with puppets.

If there's anything genuinely offensive about Dunham – beyond the sexist, racist, homophobic, anti-Arabic hackwork – it's this mushiness, this refusal to believe in anything. Worse than his material is his idea that this is some exuberant, liberating space, free from the watchful eye of the P.C. Police, where we are all encouraged to laugh at the stuff we all secretly, deep down, find funny, but would never dare utter in the civil course of daily life. Dunham's act creates a sense that such jokes, and the attitudes they reflect, are a natural state that is being encroached upon, and that to some meaningful extent we are all Walter, or Bubba J, or even Achmed the Dead Terrorist.

Cue 10 minutes of jokes about pint-sized alcoholism and debauched breastfeeding, delivered by a huge-headed, vaguely nightmarish-looking newborn barking for more whisky and gin. And, well, sure. Pass the whisky, pass the gin, pass the $35 Achmed Syrah with its enticing aromas of blackberry bramble and cedar cigar box. Might as well drink deep, and cackle like a dummy. For Dunham makes diaper babies of us all. 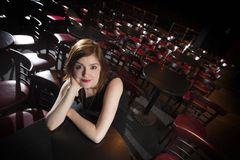