Is Progress a good thing for Toronto? Local theatre producers and presenters are divided on the question – and so am I.

I'm talking about Progress: International Festival of Performance and Ideas, which kicks off its inaugural 12-day run on Feb. 4.

This new winter spinoff of the SummerWorks Festival will bring indie theatre and dance artists from Israel, Ireland, Tunisia, Poland, Ukraine and Brazil to the Theatre Centre on Queen Street West.

It makes sense for this successful indie theatre festival to have an internationally oriented counterpart: Artistic director Michael Rubenfeld tried to open up the summer edition to the world, but found visiting works got lost amid a flood of local and national productions.

And in February, Progress can tap into a circuit of winter performance festivals that stretch from PuSh in Vancouver to Under the Radar in New York.

There's only one problem: Toronto already has a festival dedicated to international performance that kicks off in February.

That would be World Stage, produced out of Harbourfront Centre and launching on Feb. 11 with a Canadian production – Sheila Heti's All Our Happy Days Are Stupid – that will then head to New York. From then until June, World Stage – which technically bills itself as a "series" – will welcome top artists from France (choreographer Jérôme Bel), England (Stan's Café) and the United States (New York provocateur Young Jean Lee).

For Rubenfeld, essentially, the more the merrier. "There is some overlap between World Stage and [Progress], but they're really only doing nine pieces a year, and there's so much more work to be seen," he says.

But Tina Rasmussen, artistic director of World Stage, is more skeptical, and worries about fragmenting an already small audience interested in international theatre. "I wish Progress all success," she says. "All I know is that I'm concerned about making sure that we have audiences for this kind of work."

A little over a decade ago in Toronto, World Stage, then a concentrated, 15-day festival, was really the only organization bringing in international work to entertain audiences (and educate local artists). Most Canadian cities have a similar single dominant festival: In Montreal, it's the Festival TransAmériques; in Calgary, it's High Performance Rodeo.

But in 2003, when the federal government passed legislation banning tobacco sponsorships, World Stage lost $650,000 it used to get from a cigarette company out of a $2-million budget. (World Stage could not provide current budget figures, and declined to supply attendance figures.)

No level of government stepped up to replace that money, although in 2007, the Ontario government under Dalton McGuinty did find millions to set up a new festival – Luminato – which would present international dance, theatre and performance as part of a much wider program of events.

World Stage decided not to compete, and so reinvented itself as a series running from January to June ("It would just be a tiny little pea next to a giant potato," explains Rasmussen).

Matters got even more fragmented in 2010, when Matthew Jocelyn took over as artistic director at Canadian Stage and reinvented the company with an interdisciplinary and international focus. This season, he has presented Kiss & Cry, an extraordinary film and dance hybrid from Belgium, and Opus, from the Australian performance troupe Circa, and will also present a mini-festival of South African theatre in April.

Add in Progress, plus the cultural programming accompanying the Pan Am Games, and Torontonians will have a wealth of opportunities to see performances from around the globe.

But will they go? Or is this overload? "International" performance, in this context, tends to be avant garde in aesthetic rather than commercial: When Disney's Newsies tour comes to Toronto in July, we won't talk about it the way we do a visit from Young Jean Lee's company.

Foreign-language performances do attract local audiences who speak those languages, but not all English-speaking theatregoers are comfortable with the idea of watching German theatre with surtitles. Besides, they can see an English translation of a German play, for example, at Tarragon Theatre.

Then there's the problem of marketing all this work. World Stage, in its current format, essentially has to sell nine shows individually, and with many of them running for only four to five performances, there's no time for buzz to build.

Festivals have their own problems on this front: It's always a shame when a great show comes to town, but gets lost in a overstuffed atmosphere. At Luminato last year, Kontakthof, from the late international superstar Pina Bausch's company, sold out well in advance. But Cineastas, by the lesser-known Argentine Mariano Pensotti, was over by the time word got out that it was spectacular. It will probably do better this month at Vancouver's PuSh, which is a longer, less-dense festival that leaves more room to breathe.

Progress is aiming for a similarly spread-out atmosphere. Unlike at Luminato or SummerWorks, it will actually be possible for a person to see all the programming. It also has a clever structure: Most of the international works have been "curated" by a local company (VideoFag, Volcano, Why Not Theatre) that will bring in their already built-up audience base.

Ravi Jain, artistic director of Why Not, was one of the skeptics when Rubenfeld proposed Progress a year ago, but now he's on board. He had curated Cine Monstro, a Portuguese-language production from Brazil of Canadian playwright Daniel MacIvor's play Monster. For Jain, it's an excellent opportunity to continue his work reaching out to other linguistic communities in Toronto, though it will also be presented with English surtitles. (Interestingly, Monster was first produced at the World Stage festival in Toronto in 1998.)

Audience outreach will ultimately determine if Progress succeeds, because as it stands, Toronto likely has too few regular showgoers to sustain this boom in international theatre. 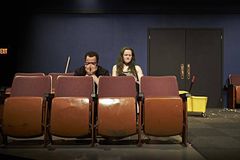