Here comes the play, all dressed in white.

Next week sees the unveiling of the brand-new Streetcar Crowsnest, an east-end Toronto theatre centre that opens with Kristen Thomson's The Wedding Party, a new comedy about two families, a wedding and mistaken identities.

The Globe and Mail spoke with actress-playwright Thomson about the marriage of what happens on stage with what happens in the audience.

You began your playwright career with the highly successful one-woman play from 2001, I, Claudia. Do you think you'll always be measured against that debut?

I, Claudia came out of the blue. I wrote it with no expectation of it being anything other than an attempt to write a play. The fact that it was received so well was absolutely fantastic, and I was grateful. But it felt like all that stuff had nothing to do with me. It was people engaging with the play. It was their relationship with the material.

Did that change with your next play, The Patient Hour? Were there expectations attached?

With that one, I had more of a sense at that time of imminent failure. It just seemed inevitable. But I just forged ahead. I wanted to be a writer. I wanted to figure out, "What do I do next?" I had no idea. I hadn't written anything before I, Claudia. So, over the four plays I've now written, I've had to teach myself to write.

Did that feeling of imminent failure continue with your third play, 2013's Someone Else?

Well, The Patient Hour had certainly landed with some people and certainly did not land for others. By the time I got to Someone Else, I kind of felt like the curse was off. I felt like I had gotten to the other side of it.

Where did the inspiration for your new play, The Wedding Party, come from?

I woke up to the idea after attending a dinner party with Ethel Teitelbaum, who is [former Art Gallery of Ontario director] Matthew Teitelbaum's mother. She's a wonderful woman, and she was telling a story where she attended a wedding where during the speeches the bride's side and the groom's side had lobbed increasingly intense insults at the other side. I loved the theatricality of the idea. I also loved the parallel between going to the wedding and going to the theatre.

I don't know that parallel. Can you explain?

Well, a marriage is a contract you enter into, and some of the essential elements of the wedding are that words are spoken and witnesses hear them and believe them. That's very much what happens in the theatre. You walk on stage and you say such and such, and everybody believes in it. There's a compact there between the witness and the performer. As actors and writers, we can do all we want to do, but we need the audience there believing what we say. That's where the actual pleasure of the experience comes from. There's a certain magic in saying something and other people are witnessing it and bringing it into being.

Now, The Wedding Party is the first play to be performed in Streetcar Crowsnest, a theatre centre which will also be rented out for wedding events. What lessons will people take away from seeing the play?

Don't drink too much. [Laughs]

Or maybe to elope?

They might want to elope. But they shouldn't. They should rent out the theatre space. They'll see Julie Fox's set, and they'll see how amazing the space can look.

Crow’s Theatre lands permanent spot in Toronto’s Leslieville
November 1, 2016
The best, and worst, of the Canadian stage for 2016
December 23, 2016 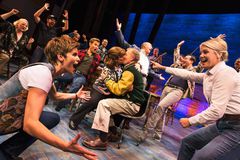 Looking ahead at the most exciting events across arts and culture in 2017
December 30, 2016 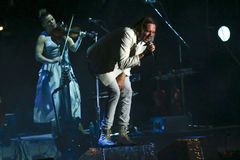