By and large, there were two La Clemenzas di Tito presented on the stage of the Four Seasons Centre on Sunday afternoon – the one Mozart and his librettist, Caterino Mazzola, wrote; and the one that Christopher Alden directed. The one that Mozart wrote was performed with remarkable vocal beauty by a wonderful cast that the COC's Alexander Neef assembled for this production, which included Michael Schade, up and coming Met star Isabel Leonard, the fine young Canadian soprano Wallis Giunta, Keri Alkema, Mireille Asselin, and Robert Gleadow. Almost to a recitative, they were all in fine voice.

Mozart's Tito, his last opera, was composed in the sad, desperate last year of the composer's life, the year that saw The Magic Flute, and the Requiem, but also the exquisite, and tragic miniatures that poured out of him, the choral Ave verum corpus and pieces the desperate Mozart wrote for glass harmonica, and mechanical organ. Tito may not be Mozart's greatest work, but nothing written in those months is unrewarding, and the opera is full of musical epiphanies. The story of Tito is one of mercy – sort of an opera-length version of Portia's soliloquy on the subject from The Merchant of Venice. Faced with an assassination attempt and betrayal by his friend, Sesto, Tito decides to rain forgiveness on his head, rather than pain. And saves his own soul at the same time. In Mozart's hands, a powerful story.

But Christopher Alden made two decisions that compromised Mozart's work. In the first place, he decided that Titos's clemency was something of a ruse, a manipulative technique to control the people around him. Not an impossible interpretation. But Alden, especially in Tito's first act, also decided to add a bevy of comic effects to the story, which completely undermined it. Performers were forced to act and sing different meanings all afternoon.

The performer who seemed to deal with this the most successfully was Isabel Leonard's Sesto, her debut in this role. Leonard has a pure, expressive voice, but is also a fine actress, both vocally and on stage, and her Sesto transfigured the dynamics of the production every time she assumed centre stage. Her "Parto, parto", one of the opera's most famous arias, was riveting, as was her confrontation with Tito in Act 2. Leonard hasn't mastered all of Sesto's psychology yet, but she portrayed a rich character struggling with complex motivations with real power.

And if Leonard was most successful in dealing with Alden's interpretative take, the performer least successful was Wallis Giunta's Annio. This is not a knock on Giunta. She is a wonderful singer, and her touching Act 2 aria, "Tardi s'avvede..." almost stole the show. But Alden decided to play Annio, especially in the opera's first half, for laughs, as a headbanded, jogging, Avril-Lavigne style "sk8ter boi", and the character, and the production, never really recovered. This is a chamber opera in many ways, with each character fulfilling an essential dramatic role. Take one out, and the structure teeters.

In the middle between Leonard and Giunta were Keri Alkema's Vitellia, and Michael Schade's Tito. Vitella is the former Emperor's daughter, enraged at not having been chosen to be Tito's wife, who, in the opera pushes Sesto, her lover, into his treasonous acts. She should be a woman consumed with passion – and when Alkema delivered that passion, she was brilliant, mesmerizing. When, however, she played Vitellia as a conniving, out-of-control, harpy, even her vocal beauty couldn't save her. We were just confused. Schade has played Tito many times, and approaches his Emperor as a man torn by fear, self-doubt, distress – a man on the edge. Beautifully sung, Schade managed to find a middle way between Mozart's forgiving Tito and Alden's crafty one, to create a bravura performance.

Daniel Cohen led the COC orchestra in the pit, and, I thought, was a bit more on Alden's side of the production than Mozart's. Tempi were brisk, phrases that might have been shaped with more beauty just flew by. The vocalists, I thought, might have been given a bit more support in finding the emotional depth in the music.

This was not a perfect production (the mixing of applause and boos at its conclusion on Sunday proof of that), but opera is better when it provokes, for whatever reason. There are too many fine performances here to ignore. You'll be sorry if you miss them. 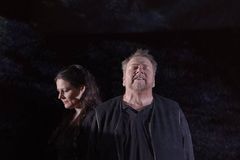