In his opening speech before the performance of Love Lies Bleeding, choreographer Jean Grand-Maître told the audience to forget they were at a ballet and pretend they were at a rock concert.

It's a funny thing to say when you're the artistic director of a ballet company, but Grand-Maître has big plans. He want his Alberta Ballet to tour the world, and this piece set to the songs of Sir Elton John and Bernie Taupin is, he hopes, his path to glory. After all, Love Lies Bleeding brought Alberta Ballet to Toronto, courtesy of producers David Mirvish and Corey Ross. And it's not just a one-night stand – Love Lies Bleeding is in town for a six-performance run.

The theme of the ballet is a celebration of the life and times of the British glam-rock superstar. Rather than a straight-forward bio, Grand-Maître presents aspects of John's life, both the highs and the lows. Every song is a mini-production of its own.

The throughline is a character called Elton Fan (Yukichi Hattori). He arrives wearing a baseball outfit with "Elton" and "No. 1" on the back and glitter sunglasses.

When he does get on stage, he really never leaves it. Through Elton Fan, the audience experiences the life of a rock star, which is traumatic at times. Characters called The Demonics appear throughout the ballet to make Elton Fan's life a misery.

Since the ballet's debut in Calgary in May, 2010, Grand-Maître has seriously reworked Loves Lies Bleeding. When reviewing the premiere, it seemed the razzle-dazzle of the staging hid a multitude of flaws. There was little or no depth in Elton Fan, for example. He seemed to be the incarnation of John and the centrepiece of most of the production numbers – sort of a day in the life of a rock star.

In the subsequent months, Grand-Maître has made major revisions including cutting the length of some production numbers. For example, I Need You To Turn To, which seemed endless in 2010, is now short and direct. The scene is set in 18th-century France and features a Demonic trying to force cocaine on Elton Fan from a snuff box.

Grand-Maître's editing makes for a more cohesive, even poignant, second half. While the homoerotic theme was always in place, it seems stronger in the tighter second act which begins and ends with a male duet. The shortened songs in between, including the drug scene, don't blunt the message.

The second act is now clearly about John's courageous declaration of his homosexuality long before it was fashionable, his struggle against the temptation of drugs and his finding of true love.

Hattori is sensational. He can tear his way through virtuoso dance tricks with ease, but he has also grown in the Elton Fan role in terms of dramatic angst. His emotional journey anchors the ballet and he gives a superb performance.

Most of Elton Fan's costume changes are done on stage with the help of his fellow dancers, but even if these transitions have been smoothed out, they still need more work. Grand-Maître does have choreography going on during the transitions, but we still focus on Elton Fan.

In terms of dance, Love Lies Bleeding can cut both ways. On one hand, the choreography is a blingy, audience-friendly mix of ballet, jazz, hip-hop and Broadway. There is a lot of bump 'n' grind that makes it feel like one long music video. Grand-Maître has also layered in virtuoso ballet steps for the men in particular.

On the other hand, Loves Lies Bleeding is ballet-lite. In fact, the second time through as a viewer, the repetition of steps and the serviceable, even routine, patterns and combinations are even more noticeable. Grand-Maître is certainly not an innovator in terms of ballet vocabulary.

In essence, the Alberta Ballet members are back-up dancers. While there are some solo parts, they are basically a chorus line surrounding Hattori. There are nine new dancers (out of 30) this season, and it appears that Grand-Maître has beefed up the difficulty level to accommodate the stronger technique of these newbies.

The choreography often veers away from the meanings of the songs. For example, Grand-Maître uses Madman Across the Water as a backdrop for Hattori and the male corps de ballet to enact a scene Grand-Maître calls A Golden Dream. There seems to be little to connect a bunch of guys in glittery Egyptian loinclothes to Taupin's melancholy lyrics.

Love Lies Bleeding is commercial entertainment. If it attracts an audience, that's good for Grand-Maître and Alberta Ballet. 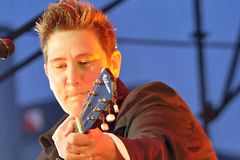 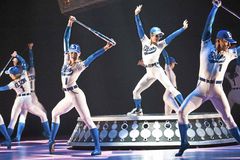 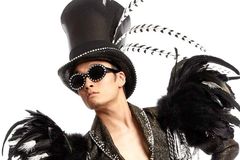 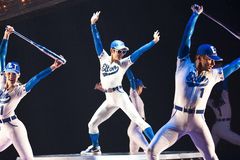