What happens when we look at a photograph of human suffering?

Do gruesome images invoke our deepest capacity for empathy or are they too unthinkable for emotional assimilation? What if images anesthetize us, as Susan Sontag suggested in her classic 1977 book On Photography? Desensitization seems all the more likely in an era of YouTube beheadings and uncensored clickbait, in which an endless, explicit image flow imposes itself on our moral, political and intellectual space. Is looking at cruelty part of being an informed, conscientious world citizen? Or is it idle and gratuitous? Could it be making us more cruel?

Chimerica, by the young, critically lauded British playwright Lucy Kirkwood, is about the famous Tank Man photo from the Tiananmen Square protests of 1989. (The play opened at London’s Almeida Theatre in 2013 and was showered with awards: the 2014 Laurence Olivier Award for best new play, an Evening Standard Award for best play and the 2014 Susan Smith Blackburn Prize for best new play written in English by a woman). 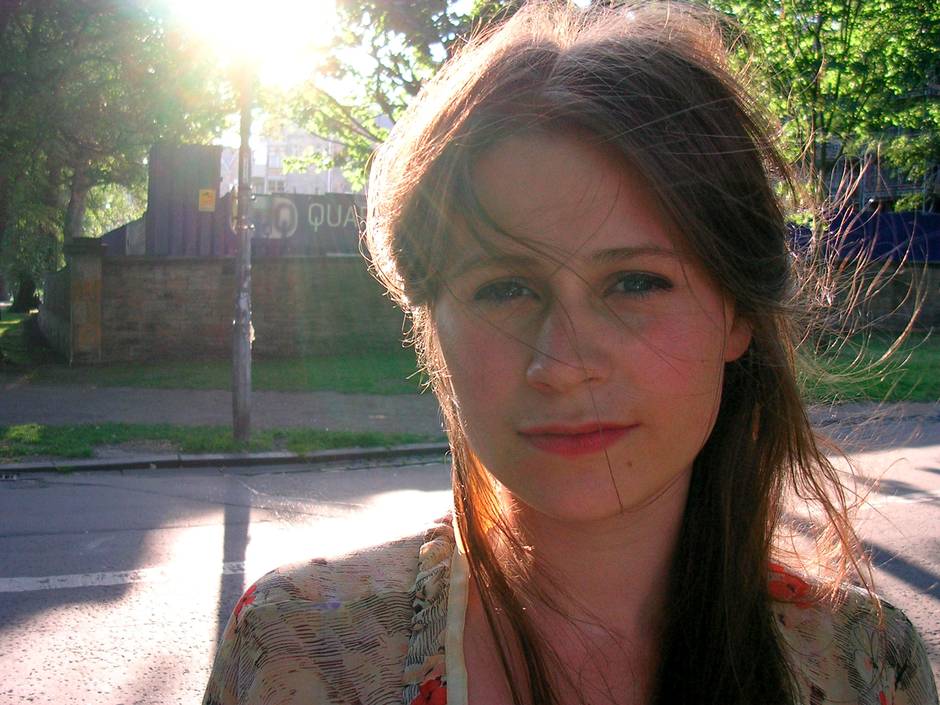 The photo depicts a lone figure in a white shirt standing before a column of three, four or five tanks – depending on the version you’re looking at: There are at least six versions in circulation, four of which were taken by photojournalists standing on different floors of the adjacent Beijing Hotel; two of the photos feature a burnt-out bus parallel to the tanks in the background, one an ornate street lamp poking up in the foreground. 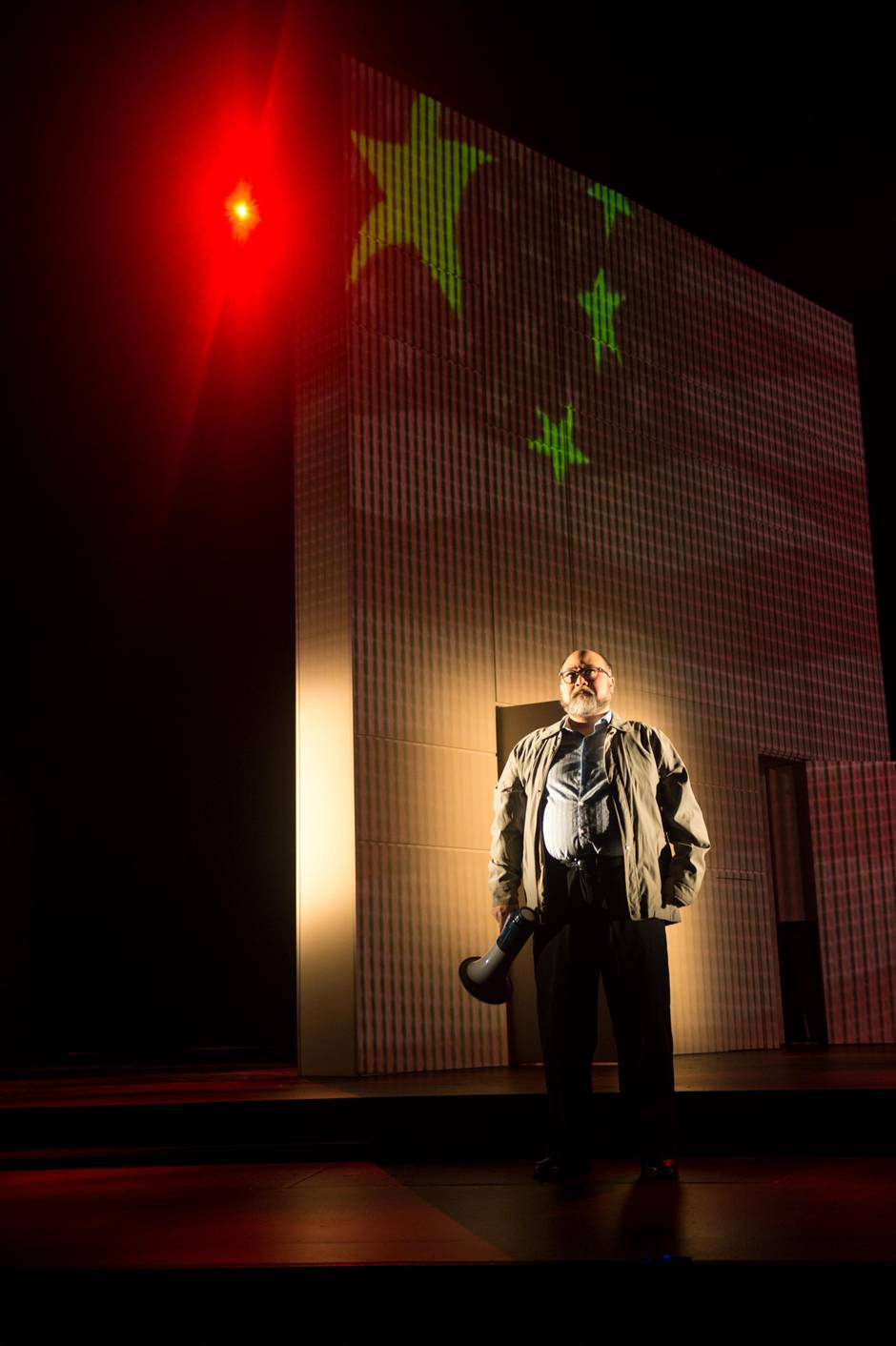 For the Western world, the image has helped shape (or mythologize) our understanding of China and the massacre. The photo reads – if photos can be read – as a staggering act of heroism: a defenceless man standing up for democracy, daring to defy a repressive regime. But the truth is that we know nothing about the Tank Man, neither who he was nor what he was doing in the photo. In China, because of painstaking and protracted censorship, many people aren’t familiar with the photo at all.

Like many undergrads who cover their walls with anti-war imagery, Kirkwood became fascinated with the Tank Man photo as a student. She was intrigued by the notion that China and the United States had taken such different and discrete economic paths, an idea that was suddenly undermined by the 2008 financial crisis and the revelation of the two countries’ inextricable interdependence. She started to read everything she could about Chinese and American fiscal policy. (Chimerica is a portmanteau of the two countries – Kirkwood borrowed the term from Niall Ferguson’s The Ascent of Money.) 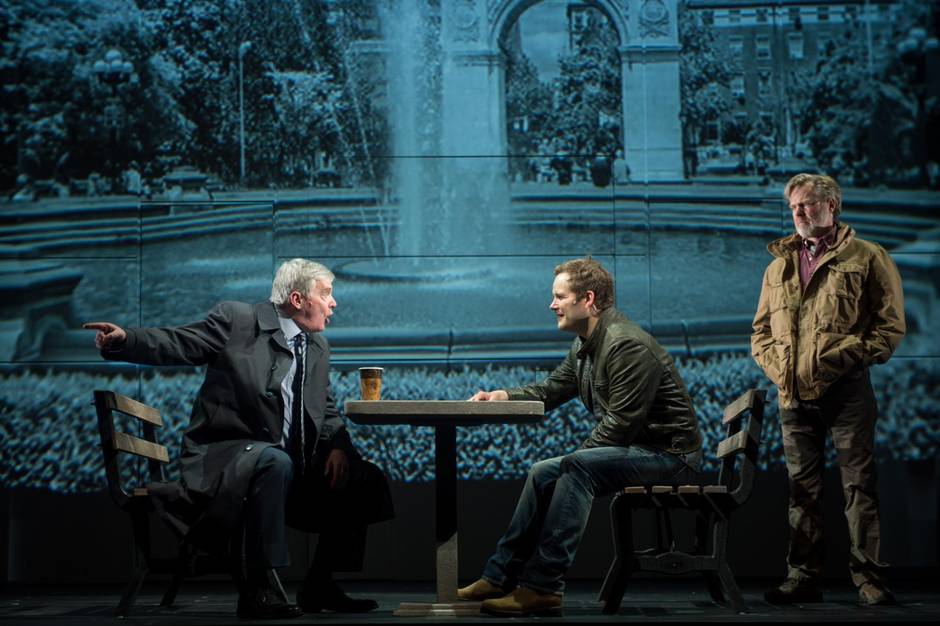 The play centres on the story of Joe Shofield, a fictional photojournalist who takes the authoritative photo of the Tank Man. Following a mysterious tip published in a Beijing newspaper, Joe sets out to find the enigmatic hero 23 years later. Writing the play, which took six years, Kirkwood worried about the weakening potency of images in a world that’s become saturated by them. Sontag’s quotation, “Images transfix. Images anesthetize” is one of the Chimerica’s epigraphs. 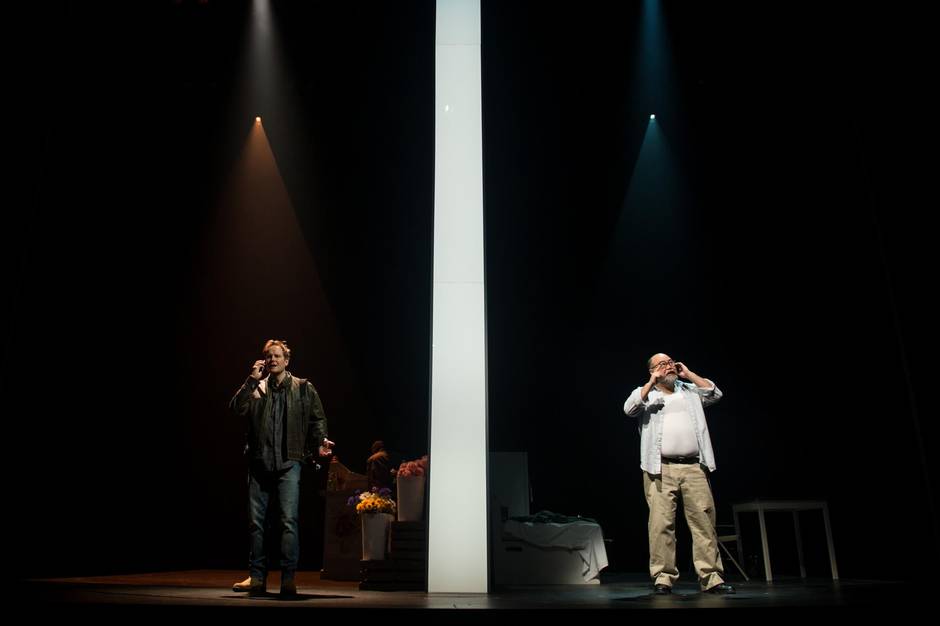 “I think what Joe feels throughout the play is the diminishing returns of a powerful photograph,” Kirkwood tells me on the phone from her home in Norfolk, England. “Are images disposable now – even deeply disturbing images of the child [Alan Kurdi] face down on the beach? They’re fleeting – the effect of them is fleeting. We carry on with our day, we feel politically disenfranchised. Images like that aren’t a spur to action. We feel like they’re something to be mourned over, an opportunity to express emotion, often filtered through the ego.”

She adds that the idea of protest, so crucial in both the 1989 and 2012 narratives of Chimerica, has lost any sense of consequence in the U.K. “The meaning and value of protest has been continually and insidiously demolished. People don’t believe in protest. Hundreds of thousands of people took to the streets to stop the [Iraq] war, and [Tony] Blair ignored all those voices. Off he went. What happens, aside from the effects of war, is that in people’s minds it doesn’t do anything to get on the streets and shout. It’s a pointless exercise.” 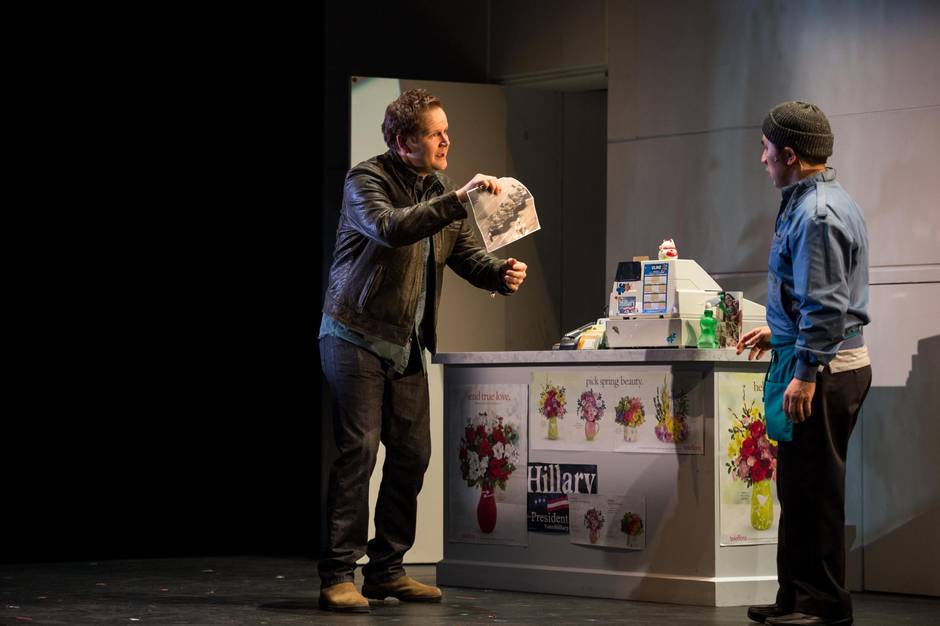 If neither images nor collective demonstration can spur action, what does that say about art? What happens when we watch theatre that depicts suffering and cruelty – are our consciences provoked into meaningful action or does Sontag’s dictum apply here, too?

These questions, and the related tension between idle spectatorship and active intervention, recur repeatedly in Kirkwood’s plays. Voyeurism – and watching exploited subjects in particular – seems like a formal and thematic obsession of the playwright. Her 2009 play It Felt Empty When the Heart Went at First but It Is Alright Now, tells the story of a young Croatian woman trafficked into the sex trade. Rather than keep the action at a safe remove behind a proscenium, Kirkwood and director Lucy Morrison transformed Hackney’s Arcola Theatre into the lead character’s office/bedroom, making the audience complicit voyeurs in her forced labour.

Kirkwood’s play NSFW (Not Safe For Work), which premiered at the Royal Court Theatre in 2012, centres on a sexy photo competition in a men’s magazine. Turns out the winning photo is of a 14-year-old girl. The image is projected above the stage throughout the play so the audience has no choice but to stare at it.

“I really hate going to the theatre when you walk out and your only feeling is ‘Oh yes, they really are awful people.’ That bores me. You have to be able to locate yourself on the stage, don’t you? I don’t want to do it in a sort of finger-wagging way – it’s not about punishing an audience: You’ve paid your 30 quid and you’ve got your gin and tonic, and now I’m going to tell you how shit you are.” Kirkwood says with a laugh. “It’s more about those fine filaments of human connection. There’s so much power in understanding that you have responsibility. It’s not a matter of feeling terrible – it’s recognizing that you have the power to change things.” 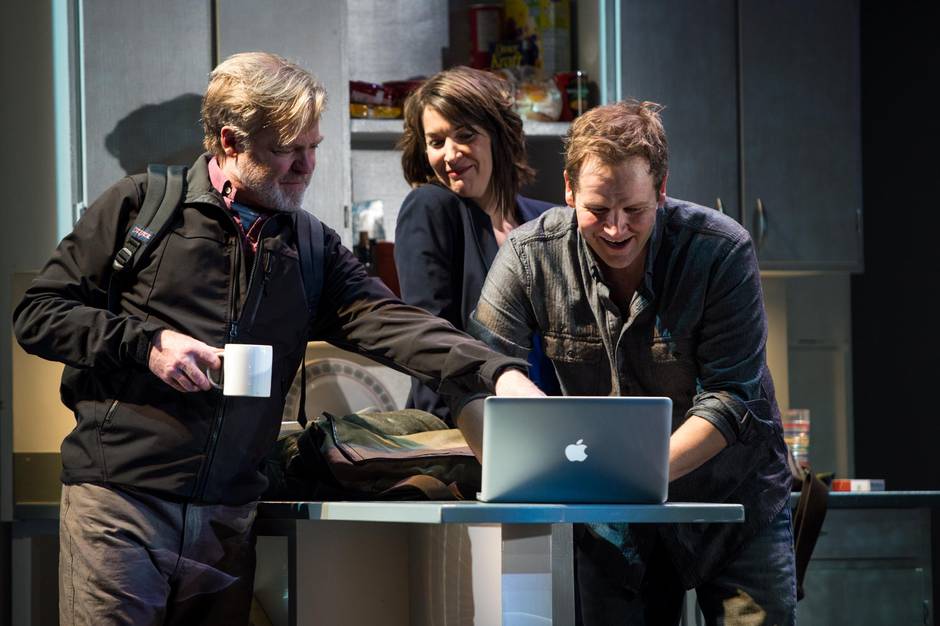 Director Chris Abraham agrees that Chimerica works on an audience’s sense of real-world agency. “I think the play is a call to individual responsibility in the face of insurmountable social forces,” he says. When I ask whether the tidiness of the ending might provide an emotional catharsis that could, as Sontag feared about the image, anesthetize instead of provoke, he disagrees. (Without giving too much away, the private and political collide with tragic elegance at the end of the play.)

“I think the ending also creates the conditions for the audience to reflect on the costs of heroic acts on the individual. It provides the audience an opportunity to meaningfully reflect on their own conclusions, perception and re-evaluate. So rather than providing a tidy emotional resolution, I think the play complicates our view of the image as well as the meaning of the actions we’ve witnessed.”

In 2016 Canada, Sontag’s prescription may be particularly hard to swallow. When the image of Alan Kurdi’s washed-up body became ubiquitous last year, the refugee crisis became a key election issue. The photograph did more than act as a catalyst for a policy change; you could argue it led to a change in government.

“Chimerica was certainly on my mind when that happened,” Abraham says. “I knew I was directing the play at that point and I thought: ‘Damn!’ – he laughs – “‘Images work.’ It flies in the face of one of the anxieties at the centre of the play: the inability of images to move us.” 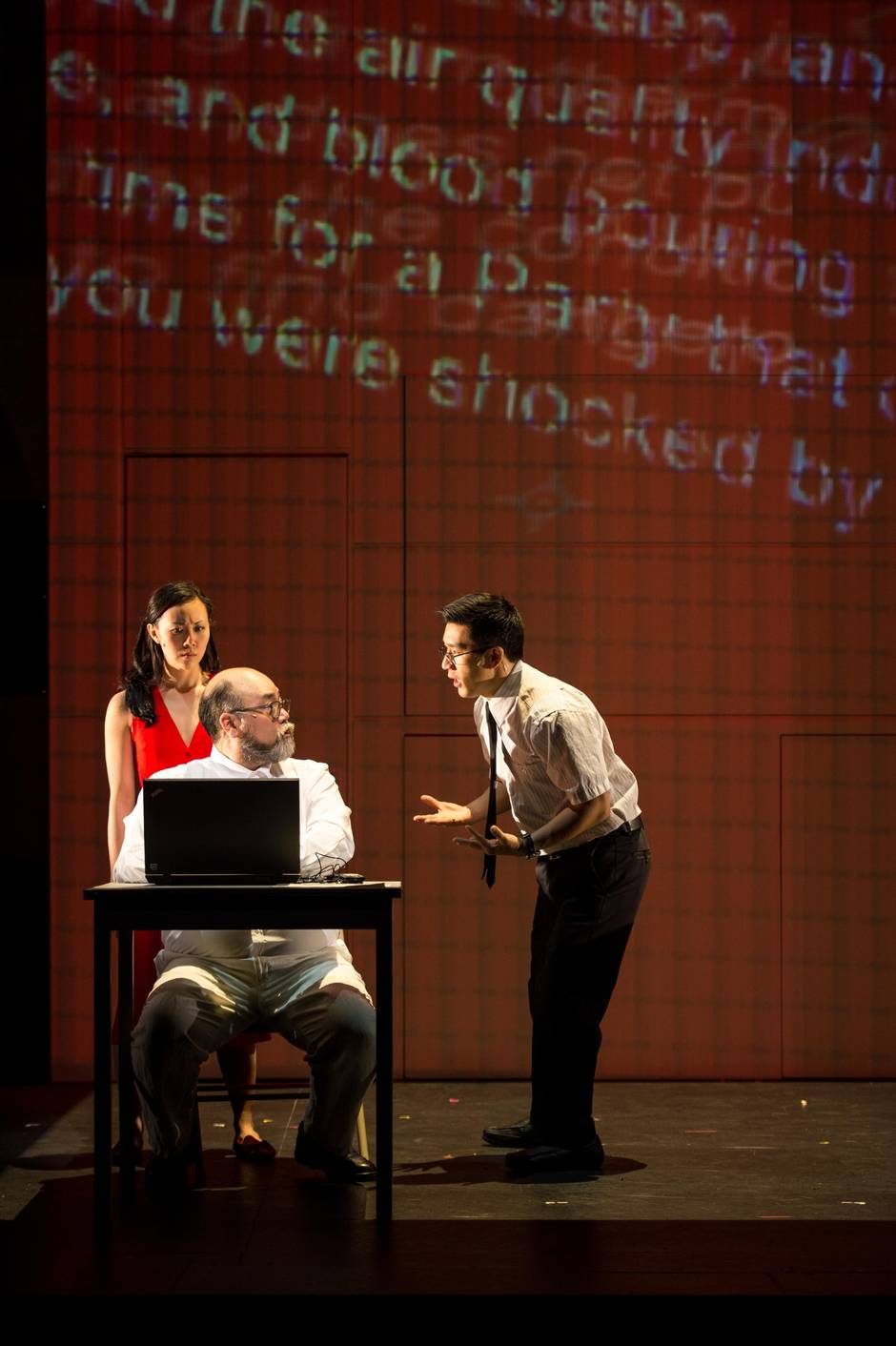 Kirkwood is heartened to hear about this Canadian counternarrative. (She says the photo had zero impact on refugee policy in Britain.) She’s especially heartened when I get back to the topic she raised earlier: the ineffectiveness of protest in the United Kingdom. I tell her that the 2003 story unravelled quite differently in Canada. When more than 200,000 people took to the streets on a frigid day in February, Prime Minister Jean Chrétien paid attention.

“That makes me very interested to hear how the play will be read by Canadian audiences, because their hopes – depending upon where their politics lie – will feel justified. I suppose that writing the play came from my own sense of political disenfranchisement. That’s really exciting – that there’ll be an audience watching it with a sense of protest. Indeed, that’s where the play goes, doesn’t it?” She pauses, then adds cheerfully, “That’s really fascinating about Canada.”

Chimerica, a co-production between Canadian Stage and Royal Manitoba Theatre Centre, plays at the Bluma Appel Theatre from March 29 to April 17 (canadianstage.com).