'It's great. It's incredible. It's a fabulous work of theatre. I wouldn't keep doing it if I didn't think it was real good."

That's choreographer Mark Morris, telling me what he sees when he looks at L'Allegro, Il Penseroso ed il Moderato, a piece the Mark Morris Dance Group (MMDG) has been dancing for 25 years and is bringing to this year's Luminato Festival. His comment might look like boastful preening on the page, but delivered over the phone in his brisk, cut-the-crap voice, it sounds like a plain statement of fact. His piece is fabulous, and false modesty is for fakers, which Morris emphatically is not.

Morris has a big mouth and small regard for what he thinks people want to hear, and that has gotten him into trouble during his high-flying career. But when he goes quiet, and his dances begin, something generous and all-embracing appears, and its name is sincerity. At a time when the culture rewards the most jaded expressions of all that's wrong with the world, Morris remains an eloquent witness for the plain truths of human experience. Those include the need to poke fun and be silly, which he also does in his dances, often right in the middle of a section that breaks your heart.

For some years, he has straddled artistic worlds that often seem to spin in separate orbits. He has directed at New York's Metropolitan Opera and does an annual residency at the Tanglewood music school and festival in Massachusetts. Last week, he presided as music director over the annual Ojai Festival near Los Angeles, a gig handled in previous seasons by the likes of Pierre Boulez, Sir Simon Rattle and Igor Stravinsky – whose The Rite of Spring is the basis for Morris's latest work, Spring, Spring, Spring. The MMDG's bustling dance centre in Brooklyn, where thousands study dance of all kinds, is also home to an innovative dance program for Parkinson's disease sufferers that has spread to over 40 centres in eight countries, including Canada.

"He's an innovator and a conservative, a satirist and a romantic," wrote New Yorker dance critic Arlene Croce in 1986, six years after Morris quit dancing for other people and founded his own company in New York City. Morris changed the game for modern dance partly by returning to what his biographer, dance critic Joan Acocella, calls "the old corny subject matter." He embraced the messy, open-hearted stuff that had been banished from dance by a cool aversion to anything that looked like sentimentality. Morris made his conservative revolution by digging into his music for structure and narrative, and animating his discoveries in ways that levelled the ground between the bodies onstage and those watching.

"You don't feel like you're looking at a dance company," said Canadian dancer Peggy Baker. "You feel like you're looking at a gathering of people who dance together." Baker, a friend of Morris's who has performed with and for him at the Lar Lubovitch Dance Company and the White Oak Dance Project, said that Morris's dancers do what traditional communities have done for thousands of years, which is to express primary collective truths.

Morris got his start in Russian, Spanish and especially Balkan dancing, performing while still a boy with folk groups in his home town of Seattle. The simple grounded steps, social inclusiveness and rhythmic complexity of the Balkan experience were particularly formative, writes Acocella. Morris said he feels a strong affinity with the values of classical Indian dance, which he absorbed during periodic trips to India.

"I work with music in a very direct way and always have, and I would say that quite specifically relates to classical Indian dance," he said. "With almost all Indian dance, there's an element that became unpopular or was even rejected in contemporary American dance, and that's dancing on the beat and telling a story in some way. No musician worth her salt in India is ever going to be off rhythm, and no dancer ever ignores the music."

Some contemporary choreographers treat music as a soundtrack for a concept or story that was thought up separately. For Morris, the story is generally in the music, and his mission is to express that in space. He would never plop a strong, distinctive piece of music into the middle of a story ballet – as say, John Neumeier does with Shostakovich's Chamber Symphony in C minor, in the National Ballet of Canada's The Seagull, seen in Toronto last season. And the MMDG never performs to a tape – the music is always live.

"Mark's works are so profoundly musical, and incredibly satisfying to perform," said Baker. "You feel like you become part of the fabric of the music itself."

Being around while those works are being created can be a challenge, she said. "He's a very fast creator, with kind of a genius mind, and he can imagine many things at once. The experience in the rehearsal is that he's got to get it out, and you've got to be fast, because he's seeing it all at once, and he wants to go on to the next thing." While Morris was creating his Haydn ballet Paukenschlag for Les Grands Ballets Canadiens in Montreal in 1992, LGBC artistic director Larry Rhodes let Baker and fellow dancer Christopher House work with Morris in an adjacent room on a new duet called Beautiful Day. "Larry knew that Mark would be just fine working on two dances at the same time," Baker said, "because neither of those casts were going to be able to keep up with him."

The speedy absorption of Morris's creative activity continues offstage as well. "The life part isn't very different from the work part," he said. Baker recalled rooming with him during a Lar Lubovitch tour of nine countries in Southeast Asia, when Morris's idea of fun was to go to out-of-the-way neighbourhoods and dig into whatever music, food and culture was native to the place. "He wanted to actually get into the daily life," she said – the same kind of immersive effort he puts into studying a score or plotting out steps.

Morris has been criticized over the years for making dances that are too musical, that look like blow-by-blow illustrations of what can be heard. There's a partisan side to that charge, related to the idea that modern dance can't be a real art form unless it's autonomous. But for many outside that debate, Morris's dances make direct, obvious sense.

"Most people aren't accustomed to watching dancing, because it's a very small sideline of the arts," Morris said, "and to see work that's as well constructed as the music it's set to is a big eye-opener for people." The clear open structures of baroque music often call to him, but he has set several works by contemporary Americans such as Henry Cowell and Lou Harrison, who figured on his Ojai programs last weekend. Morris even conducted an audience singalong of a piece by Carl Ruggles.

Morris uses vocal music more than any other choreographer, and the words always matter. The text of Handel's pastoral ode L'Allegro, Il Penseroso ed Il Moderato is a descriptive dialogue between allegorical figures – the joyful mind and the contemplative mind. The kinetic resolution of those eternal contraries is a large part of what rocks people when they see Morris's piece. The work itself is a communion of opposites, of simple moves that build up into complex patterns, of gender roles parodied and overcome. If art is a mirror turned toward life, Morris's mirror is exceptionally large, with room in it for all.

L'Allegro Movement Project, a collaboration of MMDG and the Toronto Dancing with Parkinson's Group, has a showing at the Daniels Spectrum on Wednesday, the same day as a public conversation with Mark Morris and impresario Gérard Mortier at the TIFF Bell Lightbox.

How the L’Allegro Movement Project has helped Parkinson’s patients through dance
June 18, 2013 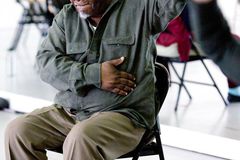 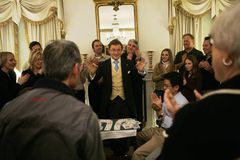 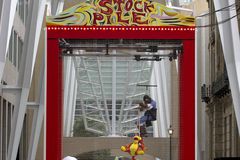