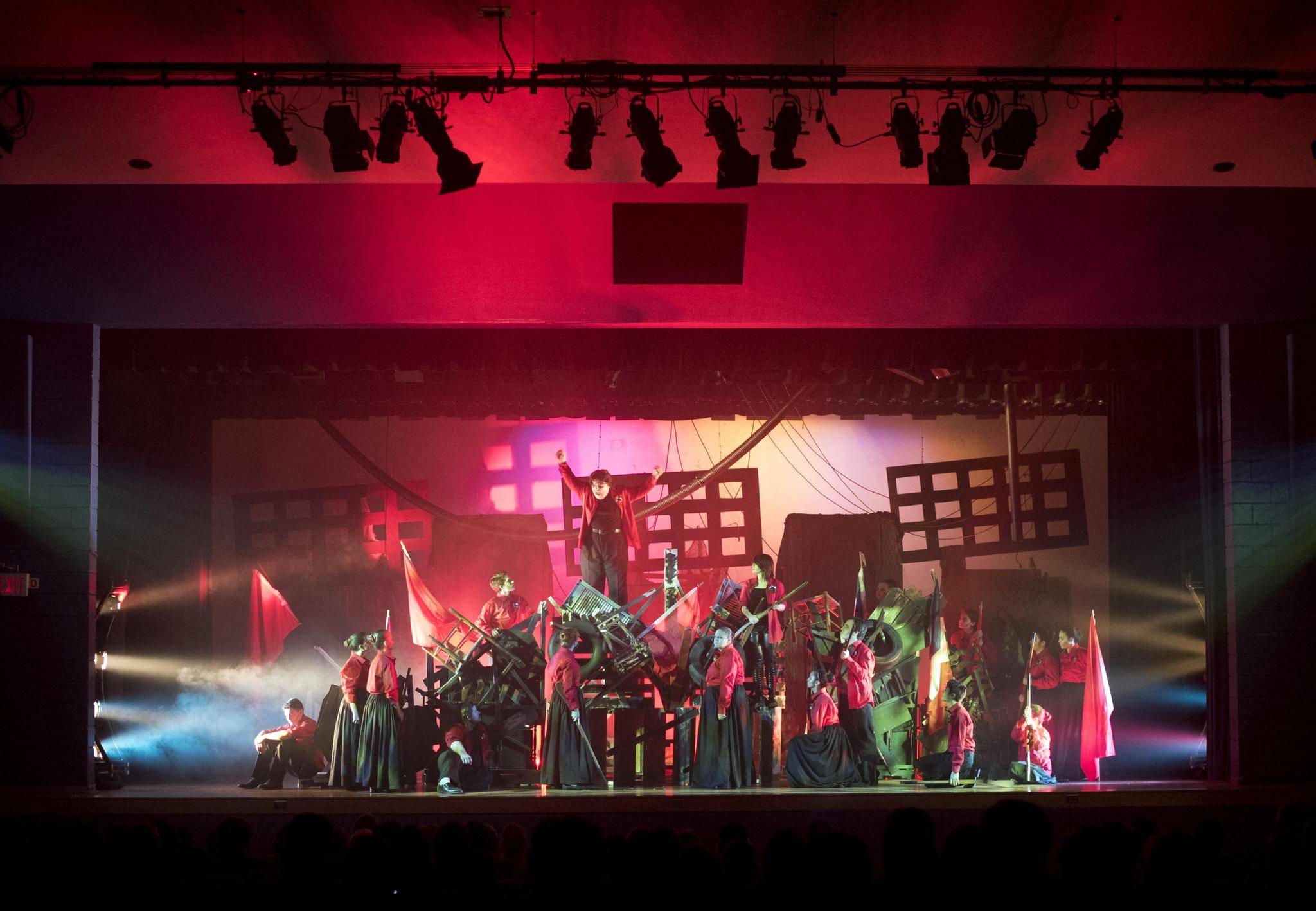 Lakeshore Collegiate’s actors surround the barricade during the opening night performance of Les Misérables on May 27, 2015. (All photos: Darren Calabrese for The Globe and Mail)


As Lakeshore Collegiate’s Les Misérables opens, ticket sales, and the state of criticism, are causes for concern. But it turns out the exhausting, exhilarating and seemingly impossible journey was well worth taking

Greg Danakas has arrived at Lakeshore Collegiate Institute for the opening night of Les Misérables with his bushy mustache surrounded by five o’clock shadow.

Long story short: On the way in from his home in Brampton that morning, the Greek-Canadian drama teacher was stopped by police for speeding and got dinged for not having his recently renewed insurance slip with him. (A $90 ticket.)

Frazzled by that encounter, Mr. D then lost his only car key later in the day somewhere in Etobicoke – and now he can’t get into the glove compartment where his shaving kit is. (It’ll be $365 to get a new key.)

Bad luck backstage can lead to good luck on stage, however – and it’s not police tickets that are on Mr. Danakas’s mind as his students put on costumes and makeup around him, but theatre tickets.

This is where I usually come in as a theatre critic – as part of the audience, the last ingredient necessary for any live production. But how do you come by one?

In the case of this non-musical production of Les Mis, each cast member was tasked with selling 10 tickets ($12 for adults; $7 for students) to family and friends – which doesn’t make the composition of this high school opening that different from many professional ones I attend. 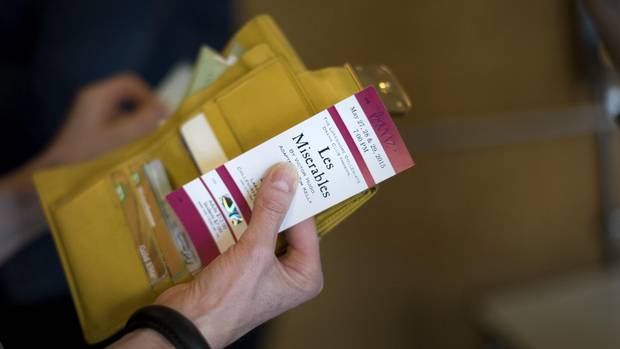 The audience begins to arrive on opening night for Les Misérables at Lakeshore Collegiate Institute in Toronto on May 27, 2015.

Olivia Costes, who is a nun called Sister Simplicity in Les Misérables, tells me that her parents, her sister and her grandparents are here tonight. The Grade 12 student is not nervous to see them in the auditorium, however – as she’s not wearing her glasses on stage: “I can’t see the audience.” (Olivia’s family has many more years of spectatorship ahead of them – she’s been accepted into Humber College’s theatre production program.)

Bradley Plesa, the graduating student playing Jean Valjean (whose younger sister Samantha is also in the show), has his two parents in the audience for opening as well. He explains to me that this is the only night his father, Alexander, can come because of his chemotherapy schedule.

I hadn’t realized Bradley’s father had become sick during rehearsals – but he doesn’t want to say any more at the moment. “If you cry before a show, it’s hard to cry during a show,” he says. 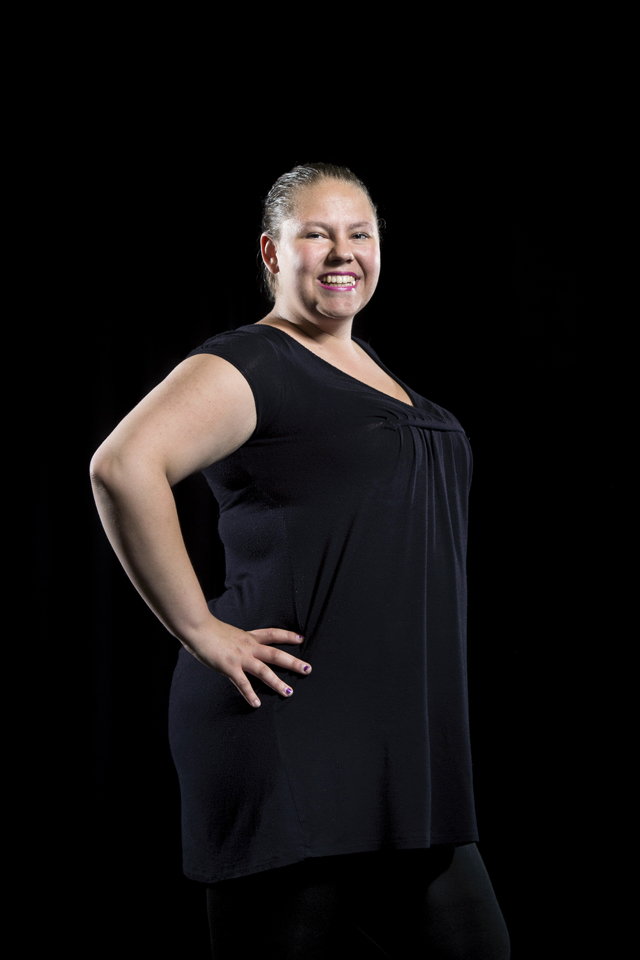 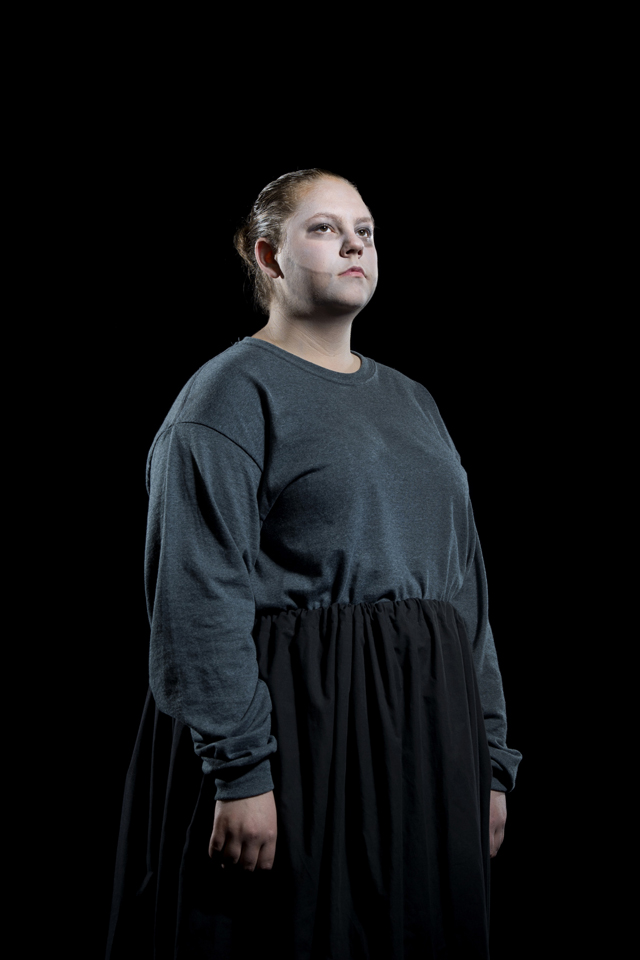 Even with a built-in audience, attendance at Lakeshore Collegiate Institute’s mainstage productions has been on the decline. A decade ago, Mr. Danakas’s racy production of Dracula sold out the 600-seat auditorium every night – but Les Mis has sold just 137 tickets on opening.

To a certain extent, this is natural: the school population has shrunk during that time. But Allan Easton, Lakeshore’s principal, wonders if larger changes in society are at work.

“Certainly in the last 10 years, there’s been a huge shift in attention span – and theatre can be a lot slower,” Mr. Easton told me in an interview earlier in the semester. “It’s not bad or good, but it’s different than what young people are used to – with the instant gratification of cellphones and video games. Does that affect how many kids come to the show?”

It’s not just the younger generation, though. Mr. Easton used to go to the theatre with his wife before they had kids, but now he’s been to a play “maybe once in the last five years.” “It’s not cheap any more,” he says. “If you had some disposable income, are you likely to come see a high school theatre production?”

I’ve given Mr. Easton a thankless role in this series – the voice of bureaucracy, of budgets, the guy who walks into an opening-night dressing room and wishes the actors “good luck” instead of “break a leg.”

But he’s a smart and caring administrator and his questions stick with me whenever I’m away from the rough magic of Mr. Danakas’s drama studio. When (on a bad day) you can spend $455 just driving from the suburbs into Toronto, why not stay home with endless entertainment streaming online for less than the cost of an adult ticket to a high school play? 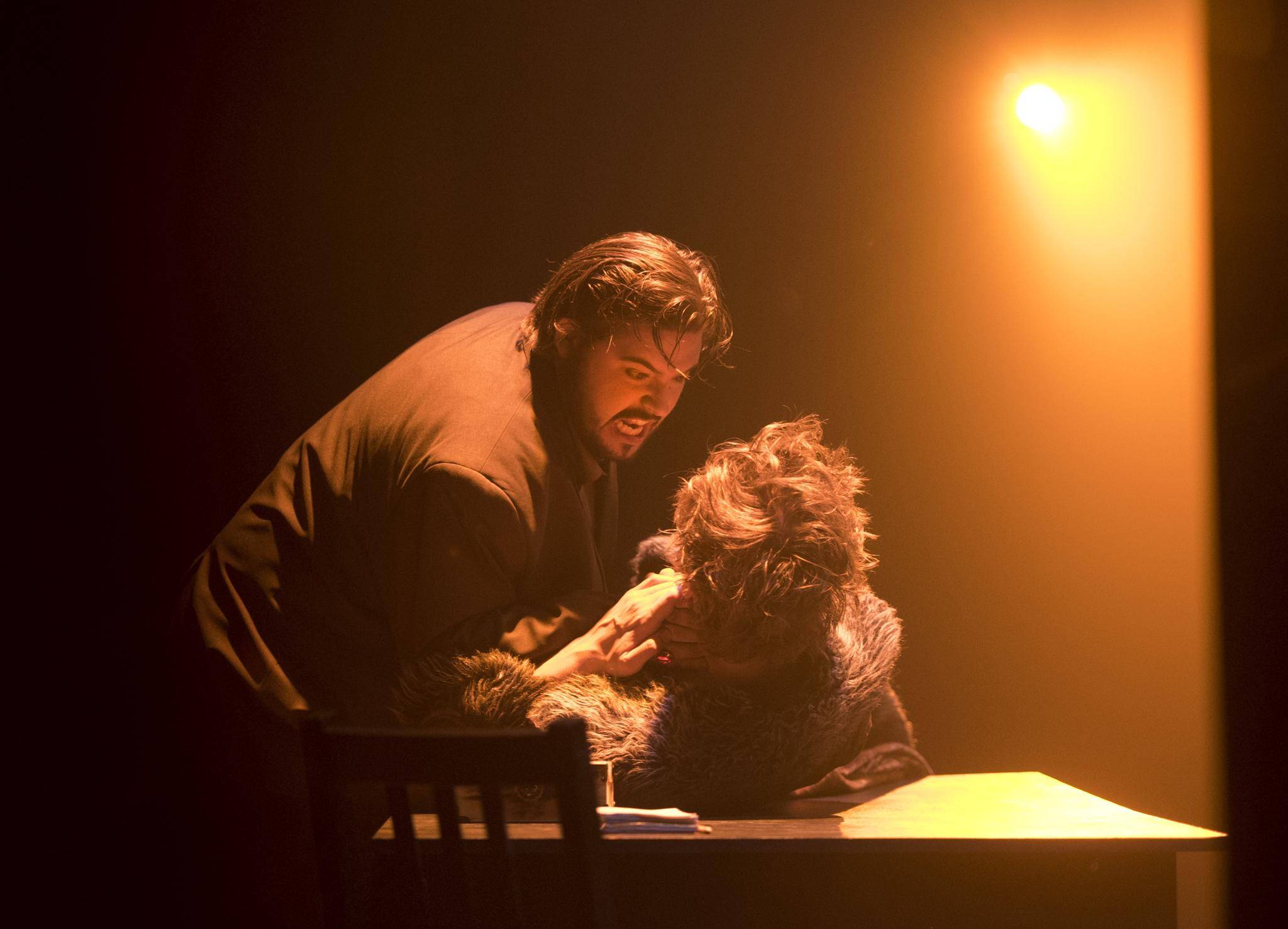 Before the Les Mis cast heads off to the green room and I head to my seat, Mr. Danakas reminds us all: “Listen: There’s people in the audience that want a great show.”

But what do audiences want? And what makes a show great? These are the questions that I should know how to answer as a critic, but the longer I review, the less certain I am the two even align. Certain plays that I think are great struggle to fill even 137 seats. Critics, like all of mainstream media to a certain extent, have less impact than ever – and some theatre companies even seem to hope social media will replace us entirely.

Even at Les Misérables though, it’s clear different audience members want different things. There’s Caroline Buchanan, for instance, described to me as the ultimate drama mom. Not only is her daughter, Samantha Dodds, playing Madame Thénardier, but her partner, Jim Ellis – a 60-year-old management consultant and part-time voice-over artist – has been conscripted to play the role of Victor Hugo.

Ms. Buchanan was one of the first in line to make sure she got good seats – and was primed for a moving experience. “I don’t know why, but it’s very emotional for me,” she says. “There’s so much lead-up – and you see what they all go through. And now it’s here.”

Sara and Alexander Plesa, Bradley and Samantha’s parents, are more skeptical about theatre in general. “I’ll be completely honest, where I’m not the ‘drama mom’ is that school comes first, grades come first and this comes last,” says Ms. Plesa, who works in a civilian role for the Toronto Police and affectionately calls her kids “drama brats.” “I’ll fight with Bradley to the end of time on that – and Mr. Danakas.”

But the Plesas have had a number of personal setbacks over the past year, with Mr. Plesa’s cancer diagnosis, cruelly, coming just as he was on the verge of being hired by the police. Their children’s performances tonight have surprised them – particularly boisterous Bradley’s deeply centred Jean Valjean.

“You wouldn’t know that their life has been the way it has been [lately] by watching that,” Ms. Plesa says. “It’s almost flooring to me: Is that my son?” 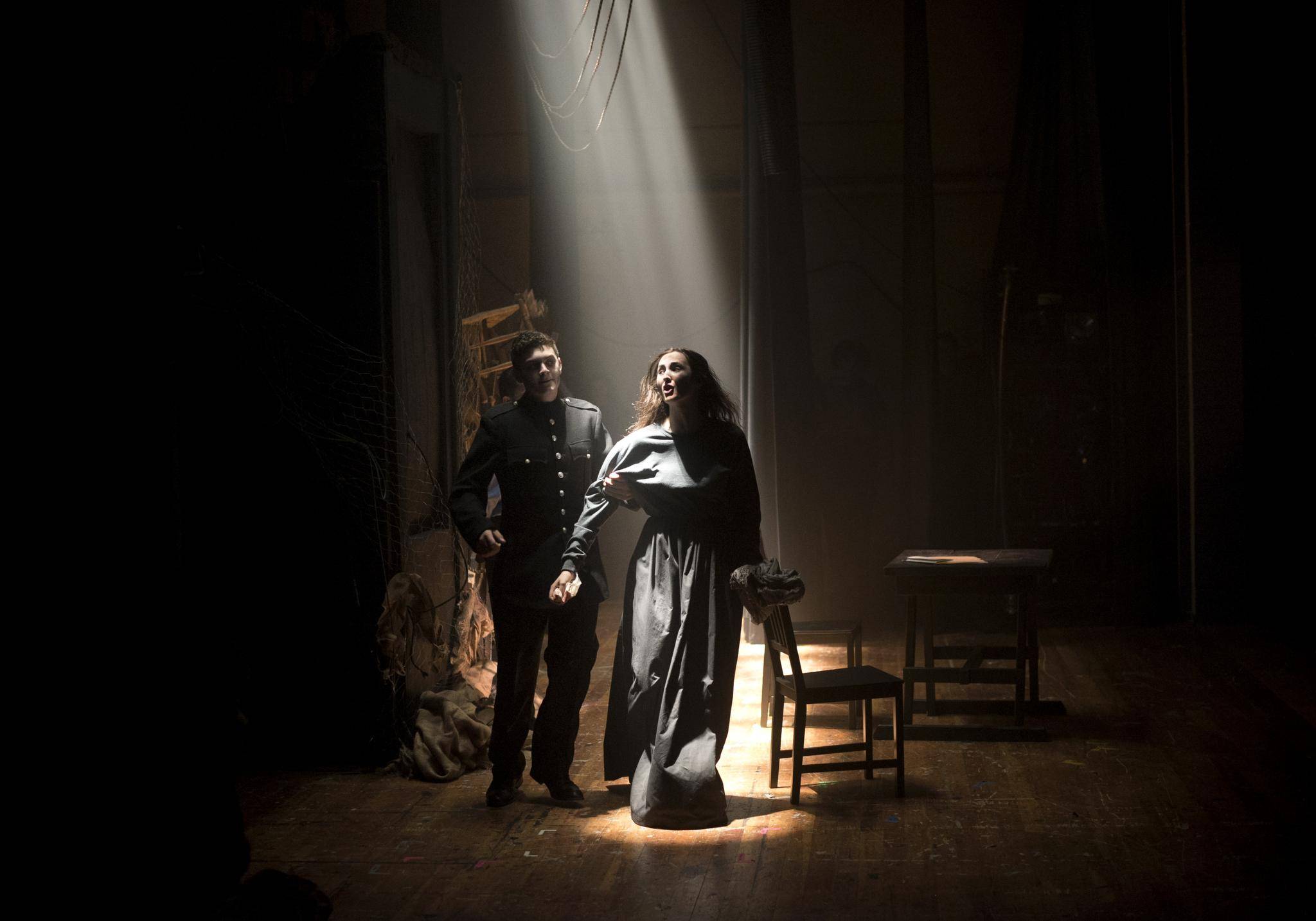 AT LAST: THE REVIEW

Mr. Danakas’s production begins in the dark with the sound of monks chanting – a track off an album called Tibetan Mantras for Turbulent Times. Then, the lights come up halfway and an adult actor – this is Jim Ellis – circulates through the students standing like statues.

“My name is Victor Hugo – I am a writer,” he says, in a voice that reminds me of Troy McClure from The Simpsons.

But as Hugo’s creations come to life, I find myself looking past Mr. Danakas’s refreshing dystopian flourishes and the occasional clunkiness of Tim Kelly’s adaptation – and I simply watch these young men and women with whom I had spent so much time. I’m disarmed as a critic.

When I see Stefan Bechler in clown makeup as Monsieur Thénardier, I am proud of how far he has come since his stage fright two months ago. And when I see Olivia, I love the way the soft-spoken young woman speaks with confidence on stage. The beautiful lights illuminating the barricades like a painting make me think of the amazingly professional 15-year-old operating them, Elliot Robson.

As for Bradley’s performance as Valjean, it is as moving as anything I’ve seen on a stage, because it was the climax of a longer journey I’ve been watching.

“You will go down as one of my great all-stars. In my opinion this has been your best performance because it is from your inner soul. No big acting – your heart and soul is exposed. Thank you for going there.”

As Les Mis ends and the actors come out for their individual bows, tears fill my eyes – and then I burst into laughter upon discovering that Mr. Danakas has given himself the final bow.

There’s no doubt in my mind that this is worth the $12 I paid. And unlike most plays I review, I did pay.

It was here that I thought my story of Lakeshore drama would end – my joy of theatre rediscovered, this series tied up in a neat bow. But I have lingering doubts about my role as I stand there satisfied as an audience member, but completely moot as a critic.

Next week: The cast party – and my final report.