It's a pretty stunning coup de théâtre for a small, independent, English-language company in Montreal: This week, SideMart Theatrical Grocery will mount the world premiere of Gordon, a new dark comedy written by Morris Panych, one of English Canada's most in-demand playwrights.

"It's a very exciting relationship for SideMart and, beyond that, for Montreal," says Andrew Shaver, the company's charismatic 33-year-old artistic director, who is directing the dark comedy. "Montreal will premiere Quebec writers, for sure, but those from the rest of Canada, we get them second or third."

SideMart Theatrical Grocery - the word "sidemart" was invented when a tired Shaver tried to find the English word for dépanneur after rehearsal one day - has slowly but surely been building a reputation big enough to premiere a play like this over the past four years.

Founded by Shaver, Patrick Costello, Graham Cuthbertson, Trent Pardy and Sarah Yaffe in 2006, SideMart first grabbed attention with a couple of site-specific productions: They staged David Mamet's American Buffalo in an alley, then Panych's The Dishwashers in the basement under a fancy St. Laurent Boulevard wine bar.

Their biggest success, however, has been Haunted Hillbilly, an original musical adaptation of Derek McCormack's novel about a rising country star in thrall to a gay wheelchair-bound vampire/couturier. After winning awards at home, the offbeat musical recently made a splash at Toronto's SummerWorks festival; now, a Montreal remount, western Canadian tour and return visit to Toronto are in the works for 2012.

SideMart's growth is part and parcel of a gradual strengthening and expansion of Montreal's anglophone theatre scene, which has traditionally played second fiddle to the larger and more vibrant francophone one.

While the presence of the National Theatre School and Concordia University's theatre program have long meant that Montreal was full of young artists doing fresh and exciting work, the companies they formed have tended to be short-lived as graduates eventually migrated to larger English-language markets, where it is easier to make a living.

Things have changed to a certain extent in the past decade or so as small, feisty anglo-oriented spaces such as Théâtre Ste. Catherine and Mainline Theatre opened in 2004 and 2005 and then the well-established Segal Centre renovated and launched a new 175-seat studio space in 2007.

SideMart has particularly benefited from the Segal Centre's artistic expansion and support of the independent scene; it is now entering its third season as a resident company there.

"More and more artists - and particularly anglophone artists - are coming back to the city," Shaver says, citing the work of other indie English-language or bilingual companies such as Scapegoat Carnivale, Tableau d'Hôte and Porte Parole. "There's just a buzz and excitement that makes people want to be here, want to stay and want to create."

Of course, the old problem of anglo brain drain still remains a threat: In 2008, SideMart founding member Pardy was lured away to join the company at the Stratford Shakespeare Festival in Stratford, Ont. SideMart's centre held, however, and instead of being the beginning of the end, it was a first step toward the Panych premiere.

In 2008, Shaver followed Pardy to Stratford to, he half-jokes, "surreptitiously go in and get him out." While performing with marvellous aplomb in Jennifer Tarver's revival of George F. Walker's Zastrozzi, he was enlisted to take part in a reading of an early version of Gordon.

Panych, who was at Stratford directing the premiere of his play The Trespassers, hit it off with Shaver. And soon the Toronto-based playwright - who, like Shaver, was born in Calgary - had agreed to let SideMart premiere Gordon in Montreal.

What benefit was there in Panych going from premiering work at one of the richest companies in the country to a low-budget company like SideMart?

Reached on the phone in Montreal, he is characteristically blunt. "I'm on a real mission to find people to direct my plays and to find a way for that to happen" without their messing the plays up, he says.

Panych has had his share of disappointments and downright bad experiences with the premieres of his plays and, like many of Canada's higher-profile playwrights, has taken to directing them himself. Yet he has found it not ideal to juggle the different agendas of director and playwright - in his experience, the director in him, faced with the nitty-gritty of getting a production on stage, often overruled the writer.

At SideMart - where, like many independent companies, the lines between actors, writer, directors and designers are blurred - Panych has found a refreshing "amorphous" development and rehearsal atmosphere where he can focus on the script, but still feel free to make directorial suggestions. "Nobody seems to mind me putting my oar in," he says.

Panych says the loose structure reminds him of his early career in the eighties at Vancouver's Tamahnous Theatre, where everyone used to give notes to everyone and actors would help to transport the set. "It really takes me back," he says. "They're fun to be around."

(Getting his partner in life and design, Ken MacDonald - who is creating two sets for Ontario's Shaw Festival next summer - to sign up for a low-budget production was another matter. "I really had to talk him into this," Panych says.)

Shaver is loving sinking his teeth into a play he describes as classic Panych, with a wicked sense of humour and characters stuck in a "vortex of futility."

"At SideMart, we're drawn to these stories of people trying to do right and running up against a wall, whether it's a wall that someone puts up or that they put up themselves," he says.

As for the walls of working in English-language theatre in Montreal, Shaver, who has been based in the city for eight years now, knows that there are still many walls, but he is happy to stay as long has he can do interesting work with SideMart. "And I can't think of a project that's more interesting than what we're doing with Gordon." 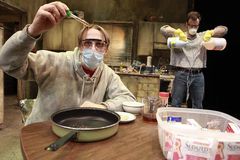