Les 7 doigts de la main has fingers in so many pots – it's darn lucky it has seven of them.

This holiday season, the Montreal-based circus collective – whose surreal name means "the seven fingers of the hand" in English – is operating at full capacity, with five of its shows currently on the road in France, Colombia and Germany.

Meanwhile, down in the United States, a revival of Stephen Schwartz's musical Pippin built around circus tricks engineered by Les 7 doigts is in previews at Boston's American Repertory Theater.

With powerful producer Barry Weissler (Chicago) and Tony-nominated director Diane Paulus (Porgy and Bess, Hair) behind the scenes – and Tony winner and former SCTV star Andrea Martin in front of them – the buzz is that it may take the company to a place even its big brother Cirque du Soleil has yet to venture.

"The lights of Broadway – that's definitely the dream – we're just taking it one step at a time," says Gypsy Snyder, one of the original seven "fingers," on a break from rehearsals in Boston.

If Quebec's Cirque du Soleil changed circus forever in the 1980s – one of its first shows was called, simply, We Reinvent the Circus – the last decade has seen a second round of reinvention of the art form in La Belle Province.

Celebrating its 10th anniversary, Les 7 doigts, a collective of jugglers, trapeze artists and acrobats from Canada, California and France, has been at the forefront of this new wave of smaller, artistically driven, not-for-profit circuses aiming to deliver thrills in more intimate surroundings and on what the troupe calls a "human scale," the polar opposite of Cirque du Soleil's giant spectacles. Along with these new circuses, infrastructure for the art form – theatres, a festival, maybe soon a museum – has mushroomed in Montreal over the past 10 years.

Les 7 doigts was the product of a two-day brainstorming session in 2002 by seven young Cirque du Soleil artists who wanted to branch out on their own to build sustainable careers as creators.

While they had different specialities – Patrick Léonard was a whiz at diabolo, for example, while Samuel Tétreault excelled at hand-balancing – they shared what Snyder calls a "common language."

"We wanted to use those disciplines to express something beyond our talent, beyond the actual technical skills that circus presented," explains Snyder, originally a juggler, and the daughter of the founders of the innovative animal-free Pickle Family Circus, which was founded in San Francisco in 1974 and influenced the creation of Cirque du Soleil a decade later.

Loft, the first show the Fingers hatched during that initial weekend retreat, was based on the then twenty- and thirtysomethings' experiences rooming together as friends and lovers in Montreal – there are now two married couples among the seven founding members – and how their circus careers affected their relationships.

"We were all very young in our days at Cirque du Soleil – and so some of us labelled us the rebellious teenagers leaving the nest," recalls Snyder.

The truth, however, is less dramatic: Cirque du Soleil has been nothing but supportive of Les 7 doigts. Guy Laliberté's circus giant hired Finger Shana Carroll to choreography the acrobatics in its Los Angeles show Iris (closing earlier than expected in the new year), for instance, while the two have teamed up to cross-promote in San Francisco, Paris and Barcelona.

Nassib El-Husseini, a former political-science professor who became CEO of Les 7 doigts after what he calls his "mid-life crisis," is impressed by the way all those who work in Quebec's blossoming "contemporary circus arts" scene co-operate – whether a large semi-commercial company like Cirque Éloize or a smaller collective such as Cirque Alfonse.

"Coming from working in conflict-resolution between governments, I'm astonished by how much solidarity there is," says El-Husseini. "There is great communication and complementarity – and support also if someone is injured."

Indeed, by banding together, the new circus companies have seen infrastructure for the art form explode in Montreal over the past 10 years. La Tohu, a 900-seat circular theatre designed for the art form, opened in the east end in 2004. Then, in 2010, Les 7 Doigts, Cirque Éloize, Cirque du Soleil and the National Circus School created Montréal Complètement Cirque, an annual summer festival dedicated to circus.

And just last month, Quebec's Minister of Culture Maka Kotto announced $9-million in funding and an agreement in principle that will see Les 7 Doigts take over and transform the old Just for Laughs museum on Boulevard Saint-Laurent into their first permanent headquarters, giving the contemporary circus arts a downtown Quartier des Spectacles presence. If the other levels of funding get approved – Les 7 doigts have their fingers crossed – it will open its doors in 2015.

This second-generation Montreal-based boom has its roots in 2001, when En Piste – a national network of circus performers and companies, most of who are based in Quebec – succeeded in its bid to have the provincial funding agency, Conseil des arts et des lettres du Québec, recognize circus arts.

On the federal level, the Canada Council eventually followed suit in 2009 – and now Quebec municipalities are increasingly giving out grants to acrobats as they would to dancers and theatre directors. "We've seen more and more artists either being influenced by circus or doing contemporary circus arts – it's been growing in the past 10 years, but mostly in the last five," says Claude Schryer, co-ordinator of Inter-Arts office at the Canada Council, who expects to allocate half a million dollars to circus this year.

Few have reached the size of Les 7 doigts, however: Since Loft premiered in 2002, annual revenue has grown to about $10-million a year, and the company now has roughly 200 employees (about two thirds of which are artists). They have eight shows that their catalogue to sell to international presenters – their latest, Séquence 8, is currently in Bogota – as well as a backlog of special projects like Pippin.

While they still perform on occasion, Snyder and the five other active founders – the seventh left in 2009 to study osteopathy – now largely work as choreographers and directors. "It's part of why we created our own company, to be able to express ourselves on many levels for many years," she says.

While Les 7 doigts de la main would like to tour more in the rest of Canada – "We are stars in Berlin, New York and Paris, but almost never get invited to English Canada," says El-Husseini – they're not planning to grow for the sake of growing. El-Husseini believes the company is at a sustainable size: they have a "critical mass" of shows that allow them to afford the best technical directors and attract top talent, but they're still small enough to hew to the original artistic goals of "human scale" circus that plays in mid-sized theatres rather than big tops.

Indeed, the reason they get along so well with Cirque du Soleil may have to do with the fact they have no plans to challenge its commercial dominance. "Oh my God, no – please, have mercy on me," says El-Husseini. "This is not the objective … We don't want to lose our signature."

After a couple of decades of growth, Cirque du Soleil has stumbled in finding a way to keep expanding lately. A week ago, the circus giant announced that Iris, a cinema-inspired spectacle expected to run for a decade in L.A., would close in January. A look at recent hits and misses.

Hit: Michael Jackson: The Immortal World Tour This posthumous performance engineered by Cirque du Soleil is on track to be the highest-grossing concert tour of 2012 and is expected to be on the road until 2014.

Hit: Touring shows New shows such as Amaluna are as popular as ever. Meanwhile, old touring shows have been reworked for markets previously left untapped.

Flop: Asia Over the past two years, Cirque has closed Zaia in Macao and Zed at the Tokyo Disney Resort ahead of schedule. 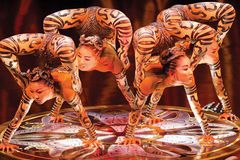 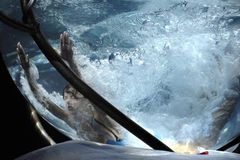 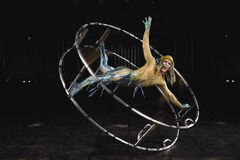