That's the fear expressed in an independent assessment of the Montreal-based school commissioned by the federal government two years ago – and which landed in a semi-censored, access-to-information form on my desk recently in an envelope accompanied by an anonymous (and slightly hysterical) letter asking me to look into it.

Joël Beddows, chair of the theatre department at the University of Ottawa, certainly doesn't mince words in the bilingual report he filed in early 2012 to the Department of Canadian Heritage, which currently funds the private college to the tune of $4.6-million a year through its Canada Arts Training Fund (CATF).

NTS suffers from "Montrealcentrism," the professor argues, and "an inequitable distribution of resources" between the English and French sections.

"If measures are not adopted and if some major changes are not made to programs, NTS may become a school more regional than national, which unfortunately is already the case in some programs," writes Beddows in French – claiming that the school's reputation and influence have been on the decline outside Montreal for the past decade.

The strongly worded diagnostic has, unsurprisingly, had the CEO of the school up in arms since he received a copy last year.

Simon Brault, who is also a vice-chair of the Canada Council and author of the pro-arts polemic No Culture, No Future, fired off an angry letter to Beddows and Canadian Heritage calling the report "replete with unsubstantiated claims, and unfounded estimates, gross factual errors and biased opinions."

Is Beddows's report as unreliable an outlier as Brault insisted? The importance of the school to English Canadian culture makes it worth taking a serious look at its claims – particularly since the University of Ottawa professor was the first to compare and contrast the school's two sections in a generation.

(Canadian Heritage, which declined interviews with CATF managers, usually commissions one third-party assessment for the English side and another for the French side; these reports are part of a process it uses to monitor all funding recipients.)

Its work may fly largely under the radar, but NTS has had an indisputably huge impact on all the arts across Canada since it was founded in 1960. In terms of the English section, it all began with stage icon Martha Henry – credited as the school's first graduate, because she left a semester early to take the part of Miranda in The Tempest at the Stratford Festival, where she still performs and directs today.

The lists of subsequent products of the school's acting, directing, design and playwriting programs is a Canadian who's who, and not just in theatre – from Royal Canadian Air Farce's Luba Goy, to Grey's Anatomy's Sandra Oh, to Republic of Doyle creator and star Allan Hawco. (Even the drop-outs are impressive: Sheila Heti, the novelist, left the playwriting program after a year.)

Beddows, who spent four days at the institution in the fall of 2011 interviewing staff and students and attending classes, argues that NTS is now serving La Belle Province better than the rest of Canada. His complaints:

Although English Canada makes up 75 per cent of the population, NTS takes in the same number of students in both its English and French acting, direction and playwriting programs, while the bilingual set design program was more than three quarters francophone from 2006 to 2010.

The acting program is longer in French than in English: four years instead of three.

As the school is located in Montreal, English students are, unlike the French students, apart from their professional milieu, but the program is too intense for them to engage with the local culture that is offered up as a rationale for the location.

All this added up, wrote Beddows, to an atmosphere where two anglophone students from two different cohorts described themselves as "second-class citizens" to him in interviews. Watching a bilingual presentation by the graduating classes as part of the school's 50th anniversary, the professor felt they were second-rate as well: "I am sorry to write that I could observe a difference in terms of the degree to which each cohort in its final year of study mastered voice technique: the francophones were stronger!"

On a recent trip to Montreal, I visited the NTS's rue St-Denis headquarters in a historic building that was once a juvenile courthouse in the Plateau Mont-Royal to go over the report's claims with Brault, who has been CEO for the last 15 years.

Brault, who is himself singled out in the report for being perhaps too involved in other ventures outside the school (a charge that he, and several other staff I spoke to at the school, felt was baseless), stands by the negative assessment of the report that he sent to Beddows and Heritage last year and tells me he declined to distribute it to his staff.

In terms of Beddows's specific concerns about the differences between the two linguistic sections, however, the CEO acknowledges that they have been debated since NTS was founded. From the start, English and French section sizes have been determined by what is ideal for the disciplines rather than through proportional representation. "You don't want to have an acting class with 18 anglophones and another with six francophones," Brault says.

Brault acknowledges that there are few francophones from outside Quebec attending the school as per Beddows's complaint, but feels that increasing the ethnic diversity of the French section is a more pressing issue. He resists the idea of solving any imbalance with quotas, however, preferring recruitment programs like the one, he notes, has balanced out the linguistic composition of the set-design class since 2011.

Though he seems to recognize several of Beddows's points as valid, Brault nevertheless reiterates that the report demonstrates a preconceived bias – a fact he feels is proved by pointing to the author's citation-less assertion that the schools' reputation has been in decline. (Beddows says he stands by his report, but wishes he had not included that claim in the introduction.)

Palmer, a frequent director at the Shaw Festival who took over as head of the English section last fall, doesn't exactly deny there are English Canadian professionals with that perception when I put it to her. "Put it this way, I've been mandated to raise the standards of the acting teaching and the cohesion of the program," says Palmer, who has read Beddows's report.

According to Palmer, the English side doesn't have any fewer resources at its disposal than the French side – and she could extend its acting program by a year if she felt that's what was needed. Instead, she is reworking the priorities of the actor's training, she says, as well as re-evaluating the program for directors "from the ground up." (Bie, head of the English section at the time of Beddows's report, declined to comment on the report when reached in Toronto.)

In many ways, it seems Palmer's hiring and the new initiatives she outlined to me respond to many of the overarching concerns expressed by Beddows, as well as earlier assessors, such as Don Shipley, currently creative director of Toronto's upcoming Pan Am Games. For instance, Palmer is lightening the English students' schedule so that they can engage more with Montreal culture outside the school.

Editor's Note: This story on the National Theatre school incorrectly referred to Heritage Canada. The correct name for the federal department responsible for such programs as the Canada Arts Training Fund is the Department of Canadian Heritage or Canadian Heritage on second reference. Also, the article incorrectly said novelist Sheila Heti dropped out of the school's acting program. In fact, she dropped out of the playwriting program. This version of the article has been corrected.

Theatre Review
Peace in Our Time: Let’s call this an honourable Shaw failure and move on
June 10, 2013 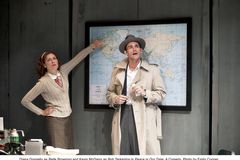 Stratford goes back in time with ‘Original Practices’ Romeo and Juliet
May 24, 2013 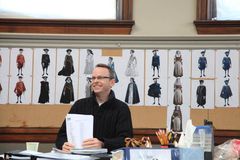 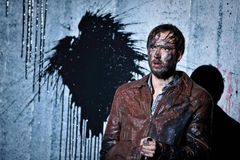