How should a play be?

All Our Happy Days Are Stupid, author Sheila Heti's play with songs by Dan Bejar of the bands Destroyer and the New Pornographers, has languished in dramaturgical limbo for more than a decade due to its unconventional nature. Many plays end up in a similar state, but Heti's may be the most famously unproduced Canadian script ever as her semi-fictionalized inability to finish it was a plot point in her much-buzzed-about 2010 book, How Should a Person Be?

In its long-awaited premiere performed by friends in a stylized, shambolic production, Heti's play turns out to be frequently delightful, full of laugh-out-loud moments of absurdity, though I wonder how much of the enjoyment depends on knowing its back story. Is it too much of a live-action extra to the novel to stand on its own two feet?

Heti's comedy tells the story of two sets of North American parents who go on vacation to a funhouse version of Paris with their respective 12-year-old children.

In the first half, the Sings's son, Daniel, runs away into a parade, leaving the families to adjust (or not adjust) their vacation plans. In the second, Ms. Oddi (Naomi Skwarna), her passion for the flute and fluttery men somehow reignited by the child's disappearance, herself abandons her husband and daughter for Cannes – with a flustered Mrs. Sing (Becky Johnson) following in hot pursuit.

Jarring shifts in focus occur frequently. The preteen Jenny Oddi (Lorna Wright) and her earnest search for her friend seems the main thread, until Ms. Oddi takes over with her thwarted flautist ambitions. At times, these characters seem to stumble out of their Wes Anderson-ish universe into entirely different plays – as when Ms. Oddi plays for a banquet that takes place in a fable about the Prince For All Seasons (played in a mega-meta-moment by Heti's ex-husband, music critic Carl Wilson, himself a character in How Should a Person Be?). Later, on the beach in Cannes, there is an extended interlude between a teenage idol and a hobbled old man played by the indie rocker Henri Fabergé (who also sings Bejar's thematically connected songs) and sketch comedian Kayla Lorette.

It's not difficult to see why theatre companies that developed All Our Happy Days Are Stupid passed on producing the perplexing work despite amusing lines like "It is so tedious to have a family." Indeed, history is full of prose writers who have failed at theatrical attempts – Henry James, Virginia Woolf, Iris Murdoch … (Anton Chekhov is the exception that proves the rule.)

But director Jordan Tannahill's production finds much that is entertaining, and even occasionally moving, in the play's scattershot structure. Of course, he has also put together a production that effectively circumvents all criticism. In his tiny Kensington Market storefront theatre, he has assembled a large cast full of actors, sketch comedians, journalists and musicians in attempting to capture the rough-hewn energy of an informal backyard reading of the play he had last year. In setting the bar that low, he easily reaches success. Any awkwardness is all part of the aesthetic.

All Our Happy Days Are Stupid does have a masterful comic creation in Ms. Oddi, played with grotesque glamour by Skwarna. Her dripping put-downs of her daughter are very funny, but, in Skwarna's perfomance, there's also a hollowness inside this clownish figure that sounds like a sad bell. She's Heti's stand-in, searching for how a person should be here, but her answer – to flee away from other beings – is a non-answer.

She has a fantastic tragicomic speech in which she expresses her desire for freedom and right to exile herself from those who want something from her, whether family or friends. "Do you know what makes a woman lose her youth?" she screams at Mrs. Sing. "Sympathy! Too much sympathy! Certainly there are feelings everywhere; must we respond to each one of them?"

In her play, as with her novel, Heti avoids structure the way her characters do. I wonder how it would hold up in a production that wasn't as flighty, or was less of a in-joke for the in crowd.

Tartuffe in prewar Newfoundland? Praise be to Andy Jones
October 23, 2013 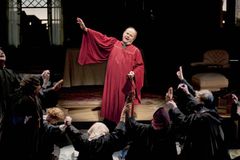 Theatre Review
With Puppet Up! there’s a reason the kids aren’t here
October 23, 2013 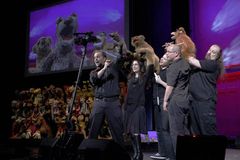 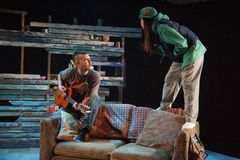 Anything Goes revival feels more like Everything Goes
July 19, 2013 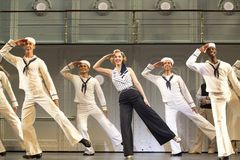