Writing about theatre for The Globe and Mail, I often report on the various awards given out across the country. So it's quite exciting to be able to have a hand in handing out a few myself for once.

I'm very pleased to announce that Stephen Massicotte's The Clockmaker has been named best Canadian play of the 2010-2011 season in the inaugural Toronto Theatre Critics' Awards.

I first fell for Massicotte's metaphysical romance when I saw its world premiere at Alberta Theatre Projects in 2009; now, after catching it at Tarragon Theatre in the fall, Toronto's newspaper critics have collectively agreed that it was the best Canadian play to have a premiere in this city this season.

The Toronto Theatre Critics' Awards - of which a total of 14 were announced on Monday - were founded over lunch just a couple of weeks ago in Niagara-on-the-Lake, Ont.

Since the Chalmers Awards was discontinued a decade ago, Toronto's critical corps haven't had an outlet for collectively honouring new plays, or anything else, in the country's largest theatre city.

In most of the great theatre cities of the world, critics come together to tip their hats to the best of the season gone by. In New York, there are several sets of awards given out in the lead-up to the Tony Awards - the Drama Desks, the New York Drama Critics' Circle and the Outer Critics Circle.

In Canada, the Canadian Theatre Critics Association gives out a couple of national awards and the Association québécoise des critiques de théâtre honours Quebec theatre. But city-based awards are limited to the Montreal English Critics Circle and the Capital Critics Circle in Ottawa.

And so the Toronto Sun's John Coulbourn, Toronto Star critic Richard Ouzounian and the National Post's Robert Cushman and I decided that we should establish the Toronto Theatre Critics' Awards, which we expect will become a yearly tradition and hope will inspire critics in other Canadian cities to follow suit.

But enough about the awards - on to the rest of the winners.

In addition to The Clockmaker, Tarragon Theatre garnered two other TTCAs. The late Gina Wilkinson was named best director of a play or musical for her work on the world premiere of Brendan Gall's Wide Awake Hearts, while Richard McMillan was named best supporting actor for his performance in Kate Cayley's After Akhmatova.

In the other acting categories, Yanna McIntosh and David Ferry were named best actress and best actor in a play for their respective turns in two very different work about war written by women: Lynn Nottage's Ruined (an Obsidian and Nightwood theatre production) and Sarah Kane's Blasted (at Buddies in Bad Times).

Cara Ricketts was given the award for best supporting actress in a play for her multiple roles in the Crow's Theatre remount of Eternal Hydra. (As a newcomer to the show she was eligible, while the production and her co-stars were not.)

As for performances in musicals, a toad and a transsexual were given top honours: Louise Pitre was named best actress for the leap she took in A Year with Frog and Toad at Lorraine Kimsa Theatre for Young People, while Australian actor Tony Sheldon was deemed best actor for playing Bernadette in Priscilla: Queen of the Desert. (Sheldon is currently nominated for a Tony Award for the same performance, now that the Mirvish co-produced show has moved to Broadway.)

Supporting actress in a musical went to Kate Hennig for her turn as dance teacher Mrs. Wilkinson in Mirvish's presentation of Billy Elliot, while supporting actor honours went to Oliver Dennis for his scene-stealing in Soulpepper's production of The Fantasticks. These two are the only winning performances you can still catch as an audience member, incidentally.

In the category of best design - which can go to an individual or a team - the Toronto theatre critics decided on Robert Gardiner for his influential set, light and video work on the Electric Company Theatre's Studies in Motion: The Hauntings of Eadweard Muybridge, which Canadian Stage presented last fall.

And last but not least, the Toronto Theatre Critics' Awards gave a special citation to Ken Gass, artistic director of Factory Theatre, for his overall contribution to Toronto theatre. Gass founded Factory in 1970 and returned to save it in 1996. As Ouzounian wrote in our citation, "It continues to be the place where some of the best Canadian playwrights [make their]debut, develop and grow." Congratulations to Gass and all the inaugural winners - a reception will be held at a time and place to be determined. 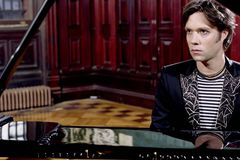