Sitting in the Stratford Festival's small, downtown Toronto office, Antoni Cimolino and Anita Gaffney are trying to appear breezy about numbers that look – on paper, at least – like the makings of a serious existential crisis for the country's biggest theatre company.

"It's always more fun to become artistic director when there is a lot of money and attendance," says Cimolino, who officially took over that job from Des McAnuff last fall.

"Same with executive director!" interjects Gaffney, who took over that position from Cimolino around the same time.

"But the leaner times also spur the imagination," says Cimolino. "I'm looking at the longer term – I know these attendance numbers go up and down."

Perhaps, but Stratford, whose attendance has seen a pretty constant decline for a decade now, hasn't seen lows this low for a quarter-century. Figures to be publicly released this Saturday at the festival's annual general meeting are bleak. They cover Stratford's 60th-anniversary season.

That was the final season programmed by McAnuff, and it raised eyebrows by featuring less Shakespeare; an unusually high number of Canadian-written plays; and a production of You're a Good Man, Charlie Brown on the playbill of the classical theatre company. With the release of today's figures, the skeptics seem to have been proved right: In 2012, attendance at Canada's largest theatre company fell to 432,240 – the lowest such figure since 1986. What's more, those who did show up paid less for the privilege than in previous years. Due to discounts, the average ticket price dropped from $68.90 in 2011, to $63.44.

For a barely subsidized theatre company, with a budget of nearly $60-million, the bottom line inevitably suffered. While Stratford trimmed everywhere it could last year – from making sure office lights got turned off at night, to laying off a half-dozen maintenance staff – the 2012 season ended with a $3.4-million deficit. That is the biggest in the company's history, even after adjusting for inflation.

Rumours of grim news have been floating around since the fall – which is presumably why the new leadership team agreed to meet with The Globe and Mail, and provide some context ahead of the AGM, and to talk about plans to lure patrons back (and attract new ones) in 2013. Among the changes coming this season: a renewed focus on what Cimolino calls "text and talent"; the creation of the Forum, a series of talks, concerts and other activities designed to augment the Stratford experience; and the overdue introduction of a twice-daily bus between Toronto and the Southwestern Ontario city of Stratford.

In the cost-savings department, meanwhile, cuts instituted last year will be continued, a pay freeze has been extended, and Dodger Productions – Broadway producers who have a long history with McAnuff – will invest $1.5-million in his production of the rock opera Tommy, hoping that it will have a life after Stratford.

But for all those plans, Cimolino and Gaffney seem intent on insisting that the Stratford Festival is, for the most part, going to keep calm and carry on. They don't see a problem with the festival's inflated size (it added a fourth theatre in 2002) or, by and large, with the kind of programming that McAnuff favoured.

They see the problem, chiefly, as a cyclical one: It's the economy, stupid.

"I don't think there's a correlation between what was on the stages and attendance, because it was right across the board," says Cimolino, who argues that

McAnuff's seasons – 2011, despite sending Jesus Christ Superstar to Broadway, saw attendance slip well below the half-million mark for the first time this century – were not all that different from those of his predecessors, and were critically acclaimed. "The world since 2008," he adds, "has been a different place for theatres around the world."

Ann Swerdfager, Stratford's publicity director, has dug into the archives and notes that the company dipped to similar attendance levels in the recessions of the early 1990s and early 1980s. "They line up all the way back to the 1950s and 1960s," she says. As for 2012's record deficit, Swerdfager argues that, based on the way Stratford measures such deficits internally – as a percentage of revenue – last year's is not as bad as ones the company incurred in 1984, 1981 and in many years before that.

Certainly there's no doubt that the economy has complicated matters for performing-arts organizations across the country, with tight times leading many to rethink operations to avoid going bust, as the Vancouver Playhouse Theatre Company did last March. The Citadel Theatre in Edmonton has turned its studio theatre into a club and cabaret venue; and Ontario's Shaw Festival, which just squeezed into the black in 2012, has taken, to quote its treasurer, "aggressive action to right-size the cost structure to align to more conservative revenue estimates."

Unlike those organizations, however, Stratford has no plans to "right-size" itself around the attendance and revenue of the past couple of years. Gaffney wants to see ticket sales climb back up – if not to the more than 600,000 Stratford regularly sold around its 50th anniversary in 2002, than to somewhere in the 500,000-to-550,000 range it saw at the start of McAnuff's tenure in 2008. "I don't think this is the right size," she says. "We want more people coming to Stratford and spending more time in Stratford."

But is that the right strategy – or are Cimolino and Gaffney in denial? If the economy is the central problem, should Stratford not be lowering its expectations, at least temporarily, rather than keeping the budget at its current $57-million? Ontario isn't exactly booming; and the dollar is unlikely to return to the rates that once played a starring role in drawing large numbers of American theatregoers to Canada.

"[The loonie] would have to fall a lot – 40 per cent at least – to make a difference," says John Karastamatis, director of communications at Mirvish Productions, which in recent years has scaled down the projected run lengths of its musicals, due to a decline in American tourist numbers.

Indeed, only if you believe that McAnuff's programming choices – and artistic decisions – over the past five seasons were a significant factor in declining attendance do Cimolino and Gaffney's plans fully scan.

Lynn Slotkin, a long-time, radio-based theatre critic who has been attending Stratford since the 1970s, was routinely disparaging of McAnuff's reign – even very briefly having her review tickets revoked following one of her online screeds against him. She sees the economy as, mostly, a scapegoat. "I think it was [McAnuff's] programming," Slotkin says. "These low numbers for attendance for [last] summer reflected, I think, the playbill, and people's reaction to the summer before. If they have a playbill that they don't like, then they will react the following year by not going."

Come to think of it, the sorts of complaints that Slotkin makes about McAnuff's direction – a deviation from the festival's emphasis on "text and talent" for what she calls "techodazzle," and an importation of American actors whose mastery of classical acting was occasionally dubious – may in fact be being getting through at the festival.

For all the artistic director's steady-as-she-goes talk, Stratford is beginning, in some ways, to look a lot more like it did in the boom years. The Festival Theatre's thrust stage is being restored to its original configuration. Canadian-written plays are (alas) back on the margins, and Canadian stars from the pre-McAnuff era are getting thrust back into the spotlight. Even the coming season's playbill rings a bell: Among the offerings are Fiddler on the Roof and The Three Musketeers, both programmed on the 1,826-seat Festival Theatre stage in 2000, one of the years when attendance topped 600,000.

In short, Stratford's new leadership – for all the novel initiatives like the Forum – seems to be banking on audiences returning, at least in part, by returning the festival to its roots. Long-term trends make that seem a gamble, but we'll find out soon if that gamble pays off, or merely be such stuff as dreams are made on.

Theatre Review
This is how you turn King Lear into a great avant-garde play in 10 easy steps
March 6, 2013 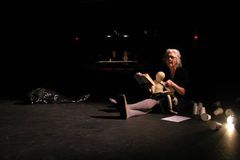 As Lear, Clare Coulter submits to an ego-bruising experiment
March 4, 2013 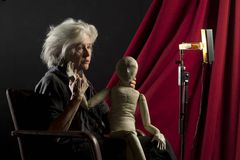 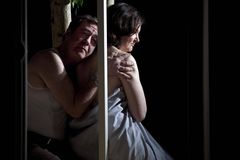