You picked her, Canada, and now you've got her. I'm not entirely sure you made the right choice, though.

Danielle Wade is the Dorothy in the new, big-budget Toronto production of The Wizard of Oz, a stage adaptation of the 1939 movie that adds in half a dozen new songs by composer Andrew Lloyd Webber and his Evita/Jesus Christ Superstar lyricist Tim Rice.

Wade was selected by viewers of the CBC talent competition Over the Rainbow – and, on television, she was certainly a dynamic performer who seemed ever so sweet.

While that reality series functioned quite nicely as publicly subsidized marketing for a commercial theatre production that will head off on a North American tour in the fall, I wouldn't fire the nation's casting directors quite yet – at least, judging by the results on opening night.

This Wizard of Oz, in this puffed-up production directed by Jeremy Sams, has much to offer in the way of sights and sounds. It has a glittering, art deco Emerald City inspired by the Chrysler building; it has a scary wizard (Cedric Smith of Road to Avonlea fame) whose giant head appears as if through night-vision goggles; and it has a yellow-brick treadmill rather than a road.

If you're looking to figure out where your ticket price went, you'll find it justified in the design – which has its dazzling moments, but, at others, leaves witches hanging in the air like forgotten laundry.

For all the spectacle, however, this Wizard of Oz is an awful lot like the Tin Man – in search of a heart. Wade, who must be our emotional guide though Oz, never quite finds it.

Wade does have a lovely singing voice. And, early on, when she gets to that beautiful Harold Arlen and E.Y. Harburg classic, Over the Rainbow, things seem to be headed in the right direction.

But Dorothy doesn't actually sing all that much after that – and, in scene after scene, Wade keeps hitting the same note – whiny rather than yearning. The 20-year-old from Lasalle, Ont., has adopted a girlish voice for Dorothy that often feels very put on. This impression is only increased by her poor posture: She's always slightly hunched over, as if she's worried that she's too tall for the part.

Her relationships with her Oz-bound fellow travellers – the Scarecrow (a loveable and funny Jamie McKnight), the Tin Man (Mike Jackson) and the Cowardly Lion (Lee MacDougall) – never really blossom the way they could.

To be fair to Wade, Dorothy is a tricky part to vary – she goes through more of a physical journey than a psychological one. As director Jeremy Sams has noted in interviews, there's a reason why there are road movies, but not road plays. Though The Wizard of Oz has been adapted quite regularly for the theatre, stage productions tend to ride on the coattails of fond memories of the original film with Judy Garland.

Co-producer Lloyd Webber and Rice have bravely attempted to make it work better on stage. Many of their additions are jarring – like speed bumps suddenly installed on a familiar (yellow brick) road. A few are good, though.

Already Home is the best new song, sung beautifully by a radiant Robin Evan Willis as good witch Glinda. "Close your eyes," she implores Dorothy, as if she's the Phantom about to launch into Music of the Night – the notes certainly seem headed that way. Instead of having Dorothy surrender to her darkest dreams, however, Glinda encourages her to wake up because: "There's no place as good as home." (Really, there's a famous line from the movie that would have made a better – and more accurate – lyric.)

Lisa Horner is a hoot as the Wicked Witch of the West, so her second-act song Red Shoes Blues – "she's prissy, she's clueless; I want her shoeless" – is a welcome tag-on (especially since at this point I had tired of Dorothy's prissiness). Horner is over the top in a way that allows you to laugh at the show a little, and things loosen up after this; she's a breath of fresh air in a production that would be more successful if it took itself less seriously more often.

The Wizard of Oz: How one weird book spawned a whole pop culture
January 11, 2013 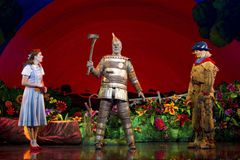 Lloyd Webber on The Wizard of Oz, Over the Rainbow – and Avril Lavigne
December 19, 2012 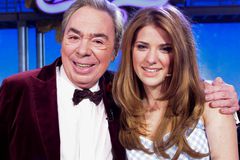 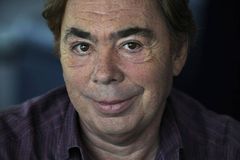