Over its almost 30-year performance history, Toronto-based Opera Atelier has prided itself on, and become known internationally for, the authenticity of its staging of the baroque repertoire. Yet, for all its attention to period instrumentation, choreography and set design, gesture and costumery, the company has imbued its productions with sufficient zest, authority and spectacle to ensure audiences have never felt they’re enduring a museum piece or scholarly recreation.

This “pact” between audience and artist will be tested later this month, however, when Atelier mounts at Toronto’s Elgin Theatre its first-ever full-stage Handel production, the 1735 opera seria Alcina. The test is technological: For the first time in its long history of lavish productions, Atelier will use video projection, as a complement to the epic painted drops conceived by the company’s long-time resident set designer Gerard Gauci. Indeed, 30 minutes of Alcina’s 150-minute run time will feature video content.

Blasphemy? Well, Atelier’s founders and co-artistic directors, Marshall Pynkoski and Jeannette Lajeunesse Zingg, insist the use of video isn’t a “gimmick” or meretricious irreverence but both something of a storytelling necessity and a logical continuation of the innovations (magic lanterns, flying harnesses, trompe l’oeil, smoke effects) that informed the original baroque aesthetic. “Yes, we want to be sensitive to the period,” Pynkoski said recently. “But we have no interest in being a mausoleum. … We want to keep pushing our audiences in terms of what they expect or accept in a period production. And we do want to be comprehensible.”

The necessity is partly rooted in history. “In the mid-18th century, Handel’s playwright [Antonio Fanzaglia] took for granted that people knew the story of Alcina,” Pynkoski said. Variously described as a sorceress, a force of nature, a malign spirit, Alcina lives with her sister Morgana on a desert island to which she lures males to be her lovers. Once she’s finished with them, she turns their souls into objects – animals, plants, buildings, birds, rocks, a waterfall, geographical formations, even the waves of the ocean – to “dress up” her domain. Nothing is real, in short, everything a mirage, and the humans, tormented by their victimhood, yearn for Alcina’s spell to be broken and for a return to fleshy materiality. A Christian knight, Ruggiero, arrives as their salvation.

The best-known version of the Alcina story, at least for baroque audiences, would have been found in Orlando Furioso, the immensely popular epic poem by Ludovico Ariosto published early in the 16th century. It’s little-read today, however; moreover, “in the opera proper [by Handel], there’s only the most passing reference to the fact that Alcina’s universe is made up of men and it happens three-quarters of the way through,” Pynkoski said. “Clearly, metamorphosis is an extremely key element in the story. But, instead of lecturing to our audiences, we felt we had to start giving them clues from the word ‘go’ that something else is going on.”

Gauci acknowledged that directors and production designers “had very clever scenic devices in the 18th century.” David Garrick (1717-1779), for one, was adept at projecting ghost-like figures into “greasy smoke.” “But it’s not something we wanted to do this time because, to a 21st-century eye, it would look rather primitive and it wouldn’t be seamless. We needed transformations that were going to appear and disappear without looking hokey. We really wanted to enhance the mirage effect, the dream-like effect. That’s why video projections seemed like such a perfect solution. 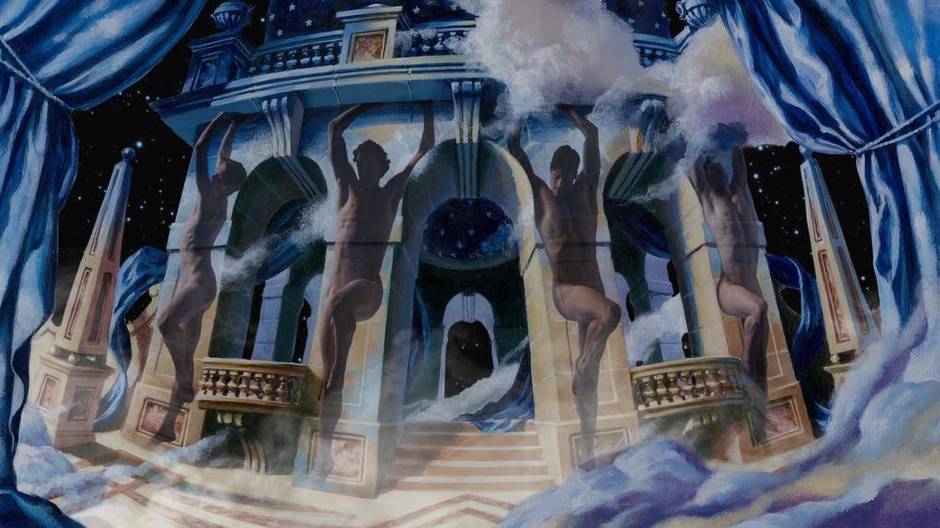 To portray a landscape inhabited by captive souls, images will be projected onto a screen in a way that will make them seem part of the painted set. (Opera Atelier)

“The trick, of course,” he added, “was to marry that with what we do, the period-design aesthetic. So, to convey a sense of a landscape inhabited by captive souls, we came up with a way of projecting images that became a part of the painted set.”

To achieve this, Gauci connected earlier this year with Toronto’s Krystal Levy Pictures, to whom he took high-resolution digital scans of the scale renderings he’d made for the five canvas drops – they include a bedroom, desert and cloudscape – he’d be using in Alcina. The scans were loaded into a computer at KLP’s studio where Atelier’s male dancers, shot against a blue or green screen, were digitally inserted into the renderings. Alcina audiences, it’s hoped, will experience a smooth transition from painted scenery to video projection and back again.

“Every time we have a transition moment,” Gauci explained, “we project clouds over the entire scene.” When the physical drop “flies out … then we’re able to project the video onto [a] giant white screen” (called a cyc, short for cyclorama) near the back of the stage area. “The projection will be exactly the same scale as the physical drop and it will look exactly the same.”

That said, “we don’t want people to sit in the auditorium and think, ‘Oh, suddenly I’m seeing a movie.’ It really has to be, still, a theatrical experience, something married to the sets.”

The actual drops are immense – one of a temple, a symphony of blue and ochre painted in latex vinyl, will be 48-feet wide, 25-feet deep onstage (Gauci’s renderings, by contrast, are much smaller: A half-inch in a rendering equals one foot in the actual drop). They’re also laborious to produce: When I visited Atelier’s funky, expansive set studio in a former commercial garage in Scarborough recently, three scenic painters were hard at work finishing the temple, the canvas for which had been tacked flat to a plywood support atop a concrete floor a few weeks earlier. Laughed Gauci: “It’s the most highly realized set with more paint than we’ve ever put onstage in 30 years.”

Historically, Atelier has referenced artists such as Watteau, Tiepolo and Canaletto for the mise-en-scène of its productions. For Alcina, the look is decidedly more modern – the surrealist spaces, in fact, of de Chirico, Dali and Magritte. Explains Gauci: “Just as the surrealists looked toward their dreams for inspiration, we looked to their imagery [with its] strange juxtapositions, where one object frequently morphs into another.” It just seemed an apt way to “stress that the setting for this production is not of this Earth, that it can vanish before our eyes like the clouds in the sky.” 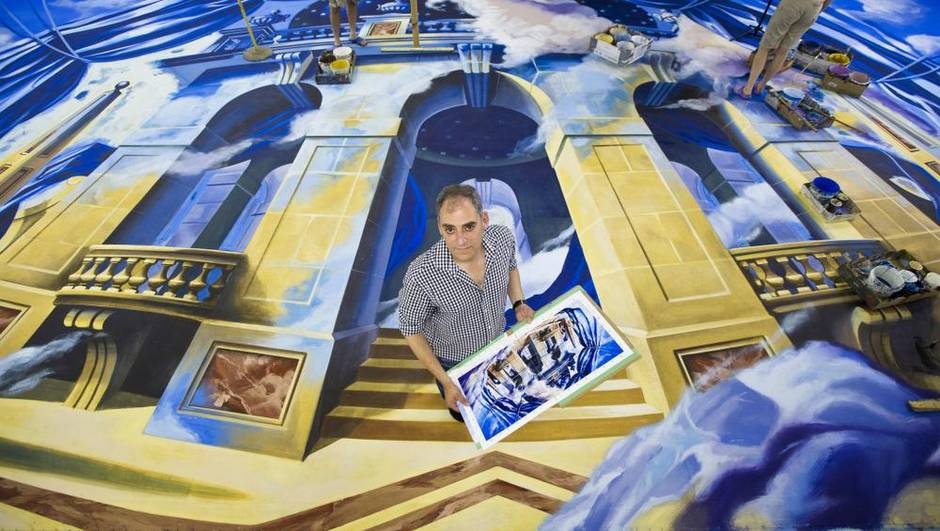 Set director Gerard Gauci and a team of artists are painting huge drops for Atelier’s upcoming production of the 18th-centruy Baroque opera seria Alcinaâ. (Kevin Van Paassen for The Globe and Mail)

Pynkoski predicts that while some purists might balk at these conceits, Alcina’s audiences are likely to be quite accepting. After all, there will be plenty of singing and dancing and tinkling harpsichords and throbbing cellos and things and people flying across the stage and disappearing down trap doors.

Moreover, “we’ve been changing constantly,” he declared. “If you were to look at video of one of our productions from 20 years ago and a video of one of our productions now, it is rather astonishing visually how it’s changed, how it’s changed gesturally, choreographically. Not change in that we’ve consciously decided, ‘Oh, now we’re going to do something different!’ It’s changed because we’ve changed as we keep working in this idiom.… We’ve spent 30 years immersed in this period [the baroque], in the designs, travelling on grants, going to collections in Europe. We’re drowning in information.

“That doesn’t mean we don’t try to find out as much as we can about the opera we’re producing. … But now the question is: Where does this information take us? It’s not about the information itself.”