Playwright and actor Linda Griffiths, who had a huge hit with her one-woman play Maggie and Pierre in 1980 and spurned the prospect of fame in America to devote herself to Canadian theatre, has died from cancer.

She remained a "person of the theatre" until the end, says her friend and fellow playwright Daniel MacIvor.

"Linda was giving notes from the hospice," said Mr. MacIvor, who flew in the cast of his coming Halifax production of Ms. Griffiths' penultimate play, Heaven Above, Heaven Below, to read for her in the palliative ward. "She believed in theatre as a way of life – a religion, I guess."

From the beginning of her career, Ms. Griffiths was involved in what was then the inherently political act of telling Canadian stories. Originally from Montreal, she was a founding member of Saskatoon's 25th Street Theatre, working on such seminal collective creations such as 1975's If You're So Good, Why Are You in Saskatoon? and 1978's Paper Wheat, a history of Saskatchewan's co-operative movement.

But Ms. Griffiths came to widespread national attention with Maggie and Pierre, written with and at the suggestion of director Paul Thompson.

Ms. Griffiths played Prime Minister Pierre Elliott Trudeau, his wife Margaret Trudeau and a reporter named Henry in the play, which premiered in the tiny backspace of Toronto's Theatre Passe Muraille in November, 1980, and went on to tour the country, have a run off-Broadway in New York and be turned into a TV movie.

"Linda Griffiths is knocking the country on its ear with her sensational and searing Maggie and Pierre … her one-person depiction of national angst," Allan Fotheringham wrote at the time in Maclean's.

As an actor, Ms. Griffiths had a career in film and television as well – and won awards and critical acclaim in the title role of Lianna, a 1983 movie by the American indie filmmaker John Sayles about a married woman who has an affair with a female college professor.

"She could very easily have made the decision to stay in the States, but she decided to come back here and work in Canadian theatre," said Mr. MacIvor. "She was a patriot."

Ms. Griffiths' works, which numbered more than a dozen and ranged adventurously in style and subject matter, have been a mainstay of stages across the country for three decades. She notably returned to a focus on iconic women with 1997's The Duchess aka Wallis Simpson and 1999's Alien Creature: A Visitation from Gwendolyn MacEwan.

Age of Arousal, a 2007 play "wildly inspired" by George Gissing's 1893 novel, The Odd Woman, about a Victorian women's secretarial college, has proved particularly popular, produced widely abroad and at home.

"Linda was a theatrical pioneer and adventurer," said artistic director Jackie Maxwell, who programmed and directed the play at the Shaw Festival in 2010. "She passionately believed that theatre is not just telling stories, but finding the perfect and very likely as yet undiscovered way of telling each one."

Ms. Griffiths continued to write and perform even after she was diagnosed with breast cancer: she had two new plays premiere last season – Heaven Above, Heaven Below at Theatre Passe Muraille in Toronto, and Games at Alberta Theatre Projects in Calgary.

She performed in the former, on the same stage where Maggie and Pierre had had its premiere 33 years earlier, with longtime friend Layne Coleman while she was undergoing chemotherapy.

"I'm living with cancer, which is what lots of people do," Ms Griffiths told The Globe and Mail at the time. "There's a whole other sector that don't have triumphant cures or remissions, that are regular people in the world. And so, I'm a regular person in the world."

Heaven Above, Heaven Below: a satisfying sequel
May 11, 2018 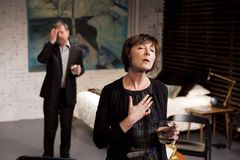 Linda Griffiths’ latest play cut so close to the bone, she almost abandoned it
May 11, 2018 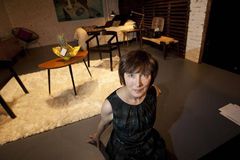 Opinion
Actress and playwright Linda Griffiths on North Korea
May 11, 2018 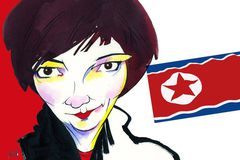 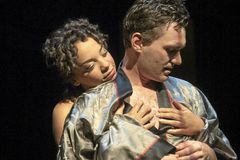