One of the most amazing moments during opening night of the Canadian premiere of PostSecret: The Show happened before the show really got going. One of the performers asked audience members to raise their hands if they had never before been inside Vancouver's Firehall Arts Centre. I'd say nearly three-quarters had their hands up. Wow. I'm guessing they were there because they're fans of PostSecret the website, rather than theatre fans. So this Internet sensation, whose stock-in-trade is anonymous confessions sent in by mail, brought a bunch of people together in the flesh for a live, communal experience.

And boy did we get one. I'm just not sure I'd call it "theatre."

In November, 2004, a guy living in Maryland named Frank Warren launched a community art project: He printed 3,000 postcards, handed them out to strangers and left them in public places, asking people to write down a secret they had never revealed to anyone and mail it to him anonymously. Initially hoping to collect 365 secrets in one year, Warren has to date received more than one million postcards, according to the Firehall's program, and the blog on which he posts a selection every Sunday has a visitor count that exceeds 702 million. PostSecret, which began in the pre-Facebook era, transitioned beautifully to the social media age (although an otherwise successful app had to be pulled after three months because of abusive posts).

The project has spawned a stack of bestselling books, and even inclusion in an exhibition at the Museum of Modern Art. But how would the PostSecret story make the transition to theatre?

PostSecret: The Show was created by Canadian Fringe Fest stalwart TJ Dawe (who also directs), producer Justin Sudds and actor Kahlil Ashanti, in collaboration with Warren. It features three actors – Ashanti, Ming Hudson and Nicolle Nattrass (who is particularly strong) – essentially reading aloud secrets that have been sent in over the years, with animations and some video playing out on a large screen behind them. Some of the confessions are delivered through voiceovers; many of the original postcards are shown on the screen.

The humorous confessions ("I am a full-time yoga teacher and I think chakras are [bs]") are well timed among the tearjerkers ("Last year was the worst year of my life. This year will be better, right?"). Mario Vaira's live guitar provides the pitch-perfect soundtrack, and he is a large and easy presence onstage.

The work is extremely compelling, but it becomes repetitive and a bit list-y with one secret delivered after another, staccato-like. There's no arc, no meaty story to invest in – other than, granted, the great big story of humanity and our need for connection. And it feels manipulative in a not-very-sophisticated way; at times I felt I was immersed in a bookstore's self-help section.

The show's strongest moments come when we are offered more information: A woman who tells her child there is no Santa because she can't afford to buy presents; an illegal immigrant with plans to jump off the Golden Gate Bridge. Both instances provoked an astonishing response from other PostSecret readers. One woman, concerned about the suicidal San Franciscan, set up a Please Don't Jump Facebook page that attracted 11,000 members in one day, and culminated with a rally near the bridge and an official proclamation declaring a Please Don't Jump Day. (Confession: A lump is developing in my throat as I write this.)

Another particularly poignant moment is a long, remorseful confession by a boy who broke his teacher's crayon pencil sharpener, let the new kid at school take the fall for it and watched as that other boy's life fell apart.

When we learn more about the confessor – or about action that erupted around the confession – there is some story to latch onto. Unfortunately, the format rarely allows for that.

Act II promised a change; the actors were to read postcards left in a little black mailbox by audience members, many of whom spent intermission scribbling down some secret they were supposed to have never revealed to anyone else. But this lasted just a couple of minutes, and then it was back to business.

Still, the we're-all-in-this-together message, even if pounded home a little too hard for my liking, was much appreciated Wednesday, the day after the Internet showed its very mean colours with a video gone viral of a woman losing it at a BC Ferries terminal after narrowly missing her boat on New Year's Eve. The delight with which this woman's worst moment was shared and LOL'd about had me wondering about humanity. PostSecret proved the perfect antidote.

And there's no question that the level of engagement in the theatre was intense; the response was overwhelming. There was a lot of sniffling – the deep, I'm-just-keeping-it-together kind of sniffling. When is the last time you heard that in the theatre?

And how many of those would-be weepers were at the Firehall for the first time – and may return to see something else? Could PostSecret: The Show serve as some sort of theatre gateway drug?

Dear PostSecret: Art can change your life, whether it's a wildly successful community art project, literature (which changed mine) or a flawed work of theatre – which I am giving only two-and-a-half stars, but would still recommend to just about anyone. 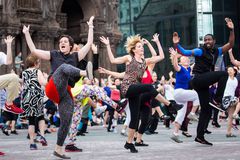 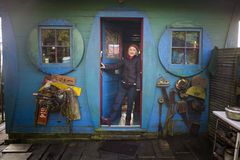 Theatre Review
The Other Place: A bare and spare play built on red herrings
January 23, 2015 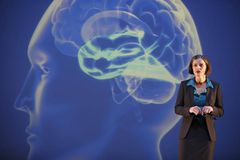