Last fall, Broadway's longest-running musical celebrated its 25th anniversary on stage with a special performance at London's Royal Albert Hall. Broadcast live to thousands of movie theatres around the world, The Phantom of the Opera at the Royal Albert Hall stars Canada's Ramin Karimloo as the Phantom.

Thirty-three-year-old Karimloo, who was the first to play the Phantom in the musical's sequel, Love Never Dies, spoke to The Globe and Mail about the performance.

Phantom is available Tuesday on DVD and Blu-ray, the first time a live performance of the musical has been available for home viewing.

Were you at all nervous about this performance?

I had done the role before, I had time to prepare, so having the cameras there excited me. Playing the part, you're behind prosthetics and the mask for the entirety of the show, and cameras can pick up little nuances. I got excited about that.

What is it about this story that makes it so popular?

The story is not over-complicated. The music is filled with passion. And both the music and the story have this perfect marriage. And people can relate to so many aspects of the show, and people fall in love with that.

You said recently that you will no longer play the Phantom. Will you miss the character?

It's time to move on. I want to grow as an actor, and you can only grow so much in one place. And I don't want to do the show a disservice by becoming stale and just collecting a paycheque. I left a big part of me on that stage, and I'm not ready to take that back on board.

You were recently on an episode of Life's Too Short, with Warwick Davis and Ricky Gervais. How did that come about?

Warwick Davis is a fan of The Phantom and a huge fan of Love Never Dies. We met and became friends, and just through our friendship I said, "I'd love to come and watch it one day to see how you work." And they set me up for a screen test for the pilot. I know I wasn't right for that role, but then another role came up. It was so much fun. It was as exciting as anything I've ever done.

Can you discuss Bad Town, the U.K.-Canadian co-production you're set to star in as a father who gets caught up in police corruption?

They're still developing it. The script, I think, is done. I think they signed up a director. Once I got secured to it I sort of distanced myself from it so they could sort everything out. Since then I've been so busy with my album that's coming out. But what's great about that is that I play the lead, so I really carry the film. This guy is really understated and it's a slow-burner script. It's going to be a big challenge.

Is it still set to begin shooting in Quebec this summer?

That's the plan. But as the dates are still moving around, my schedule keeps filling up with the tour to support the album, but we'll make it work.

Do you want to do more film and TV work?

Absolutely. I want to be as diverse as I can. If I get a chance to be a recording artist, or a film actor, or do plays or musicals, if you keep dipping in and out of those you're only going to improve your craft. I've done musicals solidly for ten years now, so other doors are opening. So I think I owe it to myself to just go see what I can do.

How does it feel to have an album coming out next month?

I grew up always wanting to be Gordon Downie. This might be my road towards that, hopefully. They inspired me as a kid, them and the Counting Crows. I've always had this urge to develop my craft as a songwriter, and I think we produced a good album. But what I've learned is that one album doesn't identify an artist, especially starting out. It's going to come in stages, so no Tragically Hip covers yet. 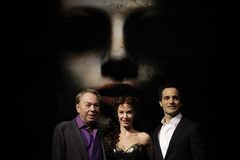