Luca Patuelli once tried to outrun – or out-skateboard – a cop. He'd been grinding rails and backsiding in the city centre of Bethesda, Md., when a police car pulled over. His friends took off on their boards. Despite skating as hard as he could on his knees, Patuelli was caught first. The cop told him to stand up. Patuelli explained that he can't stand without his crutches. The policeman demanded to know where his crutches were. Patuelli said that he'd left them at home; the skateboard functioned as a mobility device.

"Well, what would you do if I took your board away?" the cop threatened.

"I'd have to crawl home." And imagining dragging his body over kilometres of concrete, Patuelli added, "I'd really prefer if you just took me into the station and called my parents."

Patuelli tells me the anecdote over lunch in the CBC building in Toronto. Although the story is a good 15 years old – Patuelli's about to turn 31 – he still relates it with a sense of bewilderment. "He just wasn't understanding that I had a disability. I actually had to pull up my pants and show him my legs."

Patuelli, who's Canadian, was born with arthrogryposis, a condition that prevented healthy muscle development in his legs. A few years after the cop incident, another round of surgery meant he had to give up skateboarding. It was a huge blow – his self-crafted technique of balancing on his knees was more than a way of staying active with his peers; it had become a life passion.

A friend suggested he try breakdancing, thinking he'd be a natural in light of the upper-body strength he'd developed from years of supporting himself on forearm crutches. Fast-forward a decade and a half and Patuelli's now a world-renowned breakdancer (he goes by the name Lazylegz) who has exploded many of the stigmas and stereotypes associated with disability and performance. He's in town to perform in two shows at Panamania – the cultural offshoot of the Pan Am Games.

The past 20-odd years have seen a proliferation of writing on disability studies as it pertains to history, ethics, policy and art. The field is often about reassessing binaries: deconstructing value judgments about physicality, accessibility – even health – and reinterpreting them from the perspective of the minority. When we think of disability now, we know to place that loaded prefix in parentheses.

In the arts, disability theory has provided fertile ground for rethinking artists and their work within a framework actively informed by difference. The approach provided us with new ways of assessing, for example, the one-armed pianist Paul Wittgenstein (philosopher Ludwig Wittgenstein's brother), who commissioned an impressive canon of "one-handed" works from Ravel, Britten and Prokofiev.

In other realms, disability theory demands that we reconsider people (and characters) as diverse as Tiny Tim, Toulouse-Lautrec and John Milton. Their physical otherness is no longer seen as a problem or obstacle, but a starting point to look at stigma, society and how differing ability might inform, change and enhance their art.

But dance probably provides the most conspicuous domain to see and consider the disabled body. When a dancer's range of movement is changed by the fact that he or she is in a wheelchair, we probably take note of this wheelchair more than we would if, say, the performer was reciting a soliloquy or playing the guitar. A discipline such as ballet has an especially rough relationship with disability studies because its technique is not just reliant on hyper-ability, but on a static ideal of perfection.

Christopher Hope, the Telegraph's chief political correspondent, recently called ballet out on this rigidity in an article titled, "How I shamed the ballet world over 'discriminating' against disabled ballerinas." After his physically disabled, seven-year-old daughter was marked down for being unable to perfectly execute certain steps on her ballet exam, Hope complained to the Imperial Society of Teachers of Dancing. He asked that they make "reasonable amendments" to the grading scheme when dealing with disabled students.

The ISTD said no, insisting that all candidates needed to be held to the same criteria in order to maintain the standard and integrity of what they do. Enraged, Hope got culture and education ministers involved; now it looks like the ISTD is considering implementing separate exams for students with disabilities.

The story is a little different in the modern-dance world – several physically integrated dance companies have emerged in the past 20 years, notably Axis Dance Company from Oakland, Calif., Infinity Dance Theater in New York and Dance>Detour in Chicago. But there still seems to be a distinction between companies interested in presenting diverse bodies and companies committed to a long-standing aesthetic norm. For now, the solution still exists in parallel structures rather than full-scale integration – not so different from what's happening in ballet or, for that matter, sports.

What's fascinating about this debate between "excellence" and inclusivity is that it doesn't exist the same way in breakdance culture. Patuelli has represented Canada in a host of international competitions – he competes against non-disabled dancers all the time. And sometimes he wins. He tells me that this is partially because of the nature of breakdancing technique, which naturally relies on isolations and arm strength. It means that he can exploit the lightness of his legs and robustness of his torso with a range of difficult "freezes," spins and flips.

The other half of the story is more about the underlying essence of the breakdancing form. "The littlest things make the biggest difference. Within hip hop, it's good to be different. B-boying is about distinction and creating your own style," Patuelli says.

At Panamania, Patuelli is performing a duet with Montreal-based dancer Nico Archambault, the first winner of So You Think You Can Dance Canada in 2008. While Archambault is TAB (that means temporarily able-bodied in the language of disability studies, because we're all bound to experience disability at some point in our lives), he also uses crutches in the piece.

After my interview with Patuelli, I dug up as much online footage of ILL-Abilities as I could find. Watching these young dancers exploit their own uniqueness in elaborate drops, spins and balances is pretty remarkable. Each body has a completely distinct centre of gravity and kinetic logic. Seeing them in motion, often side by side, makes for an inspiring display of physical talent and training. With forearm crutches staked to the ground on either side of his body, Lazylegs holds himself up in a high, arched crescent that goes on and on. He looks irreverent – and then just plain strong.

ILL-Abilities perform Limitless July 17-18 at the Young Centre for the Performing Arts. 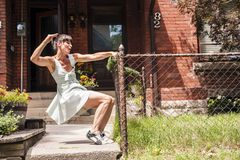 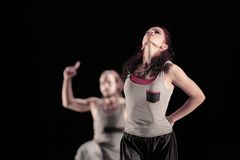