The Dora Mavor Moore Awards take place Monday night, officially marking the end of the 2014-15 theatre (and dance and opera) season in Toronto. It's a time to celebrate, and for embarrassing speeches, but it's also a time for reflection and regrets.

Let me reflect on my regrets, as a theatre critic who mainly covers Toronto.

I have two main ones. There's a show I wish I had reviewed differently, and there's a news story I wish I had jumped on.

Both have to do with Soulpepper – the not-for-profit theatre company that is headed to the Doras with a whopping 25 nominations for its productions or partner presentations, and whose remarkable success and ability to evolve as it grows I, too, often take for granted.

"Statistically, every black man in Toronto has been stopped by police."

Where could you hear that line spoken on a stage, two months before Toronto journalist Desmond Cole's Toronto Life cover story about having been stopped 50 times on the street by police and a full four months before Mayor John Tory announced he would push to end the racist practice known as "carding"?

It was in a production of a 1970 Italian farce at Soulpepper.

Director Ravi Jain took Dario Fo's Accidental Death of an Anarchist, moved it Toronto, and, with a diverse cast of actors led by the whirlwind that is Kawa Ada, used it to tackle issues of police overreach and misconduct.

I wrote that I felt "hit over the head" by the play's racial politics. But it turned out that Torontonians, especially white middle-class Torontonians such as myself and much of Soulpepper's core audience, needed a hit on the head.

Doubly embarrassing: I had written more positively, and repeatedly, about the Tarragon Theatre's production of An Enemy of the People – which, following the blueprint of a German production, updated a Henrik Ibsen play to engage audiences about municipal corruption.

Accidental Death was doing a similar thing – down to a moment in which house lights came up and the audience was directly confronted. Only Jain's conceit was entirely original and local and repurposed a "classic" for even more pressing reasons. Naturally, it was rougher around the edges than a production based on a production that had already had international success.

In short, I didn't get it. The Dora jury did. Accidental Death of an Anarchist is up for six awards in the General Theatre Division on Monday night – including outstanding production and well-deserved nominations for Jain and Ada.

My second regret is neglecting the biggest news of the season on June 2.

Soulpepper wants to use this money – and 77 per cent of the fundraising goal has already been reached – for artistic expansion, not physical expansion.

The culmination of an 18-month consultation with artists, staff and board members, the campaign will help the company transform into what they're calling a "National Civic Theatre." (A, not the.)

Goals include touring more work across the country (as Soulpepper did so successfully with Ins Choi's Kim's Convenience); taking productions out into the world; and finding ways to broadcast and stream more plays and events.

The money will also create new artistic residencies – and help the company fulfill a new, properly articulated commitment to gender and cultural diversity on its stages.

All this is exciting news – but I didn't cover it. And I know that if Soulpepper had announced a new $10-million building, I would have dropped whatever I was doing to write about it.

Buildings are sexy, but an overemphasis on bricks rather than what's behind them is the bane of arts and culture – especially in Toronto. Just this year, The Globe and Mail investigated the Royal Ontario Museum's capital campaign and discovered that $33.3-million was still owed to the province for the 2007 Michael Lee-Chin Crystal expansion.

Likewise, Toronto's actual "civic" theatres, owned and operated by the city – the Sony Centre, the St. Lawrence Centre and the Toronto Centre for the Arts – are oversized buildings in search of a purpose, problems, such as carding, to be solved by the mayor's task forces.

By contrast, 80 per cent of the money raised by Soulpepper's Creative Capital Campaign will go straight to theatre artists.

Take the $1.6-million that the Slaight family has committed to music programming and youth outreach at Soulpepper. Mike Ross – the talented composer behind Soulpepper's hit musical-theatre piece Spoon River – will be on a three-year contract as the inaugural Slaight Family Director of Music thanks to that money.

Ross, 39, who has a wife, a child and another on the way, can relax about money and his mortgage for three years and focus on exploring new ways to merge music and theatre. Which will hopefully lead to more work like Spoon River – a show tied for a leading eight nominations in the Musical Theatre Division at the Doras.

Then there's the new Young/Schultz Venture Fund – to which David and Robin Young announced a $3-million donation from the Michael Young Family Foundation.

That money not only has nothing to do with bricks, it's going to experimentation, to research and development, to incubating work that may never be seen by an audience. This is what an ephemeral art form needs: ephemeral philanthropy.

On Monday, Soulpepper will win or it will lose at the Doras – but with artists engaging with Toronto today and donors investing in the future, they're in better shape than ever.

Richard Rose declines Dora nomination for An Enemy of the People
June 1, 2015 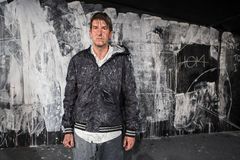 Three Dora nominations for An Enemy of the People declined
June 1, 2015 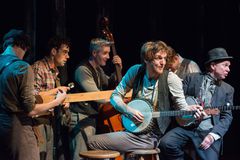 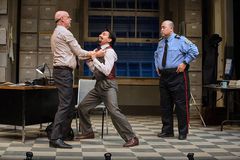