At least, that's how ballet-mad audiences seemed to feel this month as they offered prolonged ovations - including rhythmic hand clapping and foot stomping well after the curtains came down and the lights went up - for both current and former members of Stuttgart Ballet.

The performances were part of a three-week celebration of the company's 50th anniversary: It was in 1961 that artistic director John Cranko began the transformation of a provincial opera ballet company into a group at the front ranks of dance - and started nurturing choreographic talents who would go on to other companies around the world.

The Stuttgart Ballet itself was also on the agenda. It performed Gemstones ( Schmuck/Stücke in German), an evening of short works that cleverly presented a history of choreographers associated with the company - from Cranko, Jiri Kylian, Kenneth MacMillan, Glen Tetley and Forsythe to contemporary ballet by Itzik Galili, current resident choreographer Marco Goecki, and current company dancers Demis Volpi and Bridget Breiner.

What follows is a capsule look at the three productions.

Apparently Neumeier has had a life-long obsession with legendary Ballets Russes dancer Vaslav Nijinsky. His choreographic approach, however, is less strictly biographical than impressionistic.

Set to a score that included music by Chopin, Schumann, Rimsky-Korsakov and Shostakovich, the dream-like, lyrical choreography had the through line of the passionate and troubled Nijinsky (Alexandre Riabko) remembering incidents in his life.

There were glimpses of his tormented professional and romantic relationship with his mentor, the impresario Serge Diaghilev (Ivan Urban), and with his long-suffering wife Romola (Joëlle Boulogne). There were also excerpts from his famous roles, with five other dancers portraying Nijinsky in authentic costumes.

It's a sign of the depth of talent at the Hamburg Ballet that so many male dancers could replicate Nijinsky's virtuoso technique, especially the jumps. The polymath Neumeier, meanwhile, also designed the gorgeous sets and costumes, influenced by Ballets Russes original designers Léon Bakst and Alexandre Benois.

Neumeier has always been the most emotional and expressive of choreographers, and this gorgeous, complex work, dominated by overlapping scenes, was breathtaking in its conceit, if a little overambitious. The Hamburg Ballet dancers were stunning.

This Antwerp-based company has been making waves under Bennetts. After she left Stuttgart as a dancer, she was Forsythe's right hand at Frankfurt Ballet. It was her idea to resurrect Impressing the Czar, which hadn't been performed since 1995. The piece, made up of five separate ballets, is vintage Forsythe - a philosophical, sarcastic, and riotous (if sometimes confusing) spoof on ballet.

The title relates to Russian imperial choreographers such as Petipa and Ivanov, whose work had to impress their ruler. The famous middle section, In the Middle, Somewhat Elevated, often performed on its own, is Forsythe's homage to technique - technique that is pushed to extremes in his inimitable style.

The other sections are all attacks on ballet, such as an auction of dancers, a comment on commercialism; and a parody about putting on a production. The finale, Mr. Pnut Goes to the Big Top, is a hilarious depiction of a corps de ballet. In this case, the entire company, both men and women, are dressed up as English school girls with identical wigs of bangs and a bob; they engage in a tribal dance gone wild.

Flanders is filled with enthusiastic dancers; their commitment dominated the performance.

Stuttgart Ballet's Gemstones (choreography from 1963 to 2010)

The Stuttgart stars were on display in this choreographic extravaganza - including the two Canadian principal dancers, Jason Reilly and Evan McKie, and soloist Myriam Simon.

McKie performed the tense trio from Kylian's Return to the Strange Land, where two men (McKie and Nikolay Godunov) manipulate a woman (Alicia Amatriain) in an enigmatic relationship of both dependence and support.

Judging by the clapping and stamping, though, the three most popular works with the audience were Kenneth MacMillan's Las Hermanas (1963), Glen Tetley's Ricercare (1966), and Itzik Galili's Mona Lisa (2003).

MacMillan's work is based on Federico García Lorca's play The House of Bernarda Alba, and clearly captured the suffocating atmosphere in this house of women. The great Marcia Haydée, Cranko muse and former Stuttgart artistic director, had originated the lead role of the sister Angustias, and for this performance played the mother, Bernarda. The manly Reilly, in his best Marlon Brando imitation, was Pepe, the man who generates the tragedy in the household. Sue Jin Kang was absolutely gorgeous as the repressed Angustias.

Reilly and Amatriain romped through the sexy Mona Lisa, a delicious spin on a push-me/pull-me relationship, dominated by tease and tickle. The very physical choreography was clearly meant to look loose and lanky, but was obviously demanding. As well, Bridget Breiner and Friedemann Vogel were superb in Tetley's Ricercare, a moody, angst-filled pas de deux of passion and drama.

The Cranko piece on the program, an excerpt from Song of My People (1971), had never been seen in Stuttgart. It had originally been set on Israel's Batsheva Dance Company. The trio from that piece, performed by Simon, with Hyo-Jung Kang and Marijn Rademaker, evoked both hope and despair. A very rich evening, indeed. 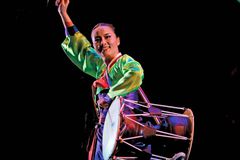