'He was a leather-clad panther. This man was tearing it up. In 1968, at his Las Vegas comeback concert, Elvis was saying: 'I'm back on top, I'm back on top.' He just nailed it."

Steve Michaels has spent the past 18 years getting fat on Elvis Presley, but "fat Elvis" is not something he abides.

The impersonator is the star of Return to Grace, a musical production that chronicles only the high points of the life and career of a lip-sneering, leg-shaking icon – up to 1973, the year of Presley's Aloha from Hawaii concert and the peak before the fall.

In person at the Toronto office of Mirvish Productions (the theatre promoters who will present Return to Grace), Michaels is nothing close to chubby. In fact, in his jeans, dark blazer and blue-black hair, he's quite the hunka-hunka look-alike. His blue eyes sparkle as he talks about the man he prefers to refer to as the King of Rock 'n' Roll.

"In 1973, the machine was oiled and he was in control of what he wanted to do," says Michaels, an Elvis fan from his boyhood days in Milton, Ont. "Any note, when he opened up his mouth, he hit it. He was 38 years old at that point, and he never sounded better in his life."

Return to Grace, a live concert experience, traces that life from 1954 (when Presley burst into pop culture with the stripped-down, rockabilly way of That's All Right) to the Aloha from Hawaii satellite broadcast, a bravura performance of sequins, sideburns and Steamroller Blues.

The word "aloha" translates to different things within different situations, but when it comes to Return to Grace, it means that Elvis has left the building.

"As Elvis fans, we don't need to be bashed over the head with someone telling us that he died," says Michaels, whose original name is Kabakos. "We know he died."

Michaels sees his various Elvis shows – he has a Christmas production in his repertoire, as well as full redos of the 1968 comeback concert and the 1973 performance from Honolulu – as joyous salutes.

But, instead of celebration, why not explanation? What made the man tick, and, perhaps, what made him stop ticking? Perhaps a monologue-based performance, in the vein of Hank Williams: The Show He Never Gave, could be developed.

"When he died, Elvis was an old 42," says Michaels, who does not divulge his own age ("How old do you want me to be?"). "We choose not to go past 1973," he continues, going into taking-care-of-business mode. "With Return to Grace, you see a concert of a lifetime and you leave with an incredible smile on your face."

A smile on your face, but no insight into the man, it seems. Michaels takes pride in the meticulous historical recreation of the musical moments of Presley, down to authentic stage patter and era-specific instruments (a Gibson SJ-200 guitar, for example, on Love Me Tender).

A deeper understanding of Elvis is not the point to what Michaels and many others do – so, impersonation, not interpretation.

It's a dubious justification from Klein, but perhaps it suits the needs of Presley's worshippers. Fifty million Elvis fans can't be wrong, said the 1959 Elvis album of that name, and it seems that it is true enough.

This Prospero is surrounded by brilliance
June 30, 2014 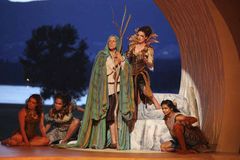 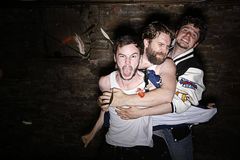