It's a surprisingly unambitious production, director James Robinson's take on Gaetano Donizetti's The Elixir of Love (L'elisir d'amore), which opened Wednesday night at the Four Seasons Centre, and if there is any corner of the operatic standard repertoire that is vying for a secure directorial hand, it's the bel canto "comedies."

The genre remains extremely tough to crack for directors and singers alike.

Operatic mirth doesn't age well; bel canto singing with speedy coloratura runs, trills and ceremonial endings on high notes needs to sound effortless and to mean something in the context of the scene and the character's inner world; the frantic intertwined ensembles must tick just so; the tuneful score must dance at a clip and not drag its feet.

The story revolves around four characters and takes place, according to the 1832 libretto by Felice Romani, in a southern European village around the end of the 18th century.

In Robinson's version, it is about 1914 and the village has become Small Town, Ont., and the set, a garden pavilion awash in warm light, remains essentially unchanged throughout. (The set designer is Allen Moyer, lighting is by Paul Palazzo.)

To make Nemorino jealous, Adina pretend-agrees to marry Belcore. Intrigues ensue, including Nemorino enlisting in the army and Adina buying his way out of it. Nemorino conveniently inherits a fortune, he and Adina reunite at the end, Belcore returns to soldiering and Dulcamara to selling dubious concoctions.

The move to the early 20th century actually creates a new issue for the production: The war now used as a comedic backdrop to this slight bel canto romcom is the First World War.

Of course, joining the army to improve your finances, then buying your way out, doesn't quite work with the First World War, which remains fundamentally unfunny. Canada lost more than 55,000 lives for the British Empire, and was gripped by a crisis due to Quebec's understandable opposition to conscription. To pretend this did not happen and offer the 1914 world as a postcard idyll bathing in a golden patina is, well, kitsch. A British recruitment poster is even used as a comedy prop in this Elixir.

It does not help that Belcore and his soldiers are straight out of Blackadder Goes Forth (or is it Monty Python?). Gordon Bintner has a voluminous, well-controlled baritone, but as Sergeant Belcore he hams it up, and the panto moments distract from the voice's undeniable qualities. When we last heard Simone Osborne on the COC stage, she was a majestic Marie Riel singing the impossible Kuyas aria in Harry Somers's Louis Riel with daring and technical mastery. In this particular opera, however, her voice comes across as small and mousy, with occasional volume-control issues in the upper register. She found the right acting tone for Adina, however, and the little bit of physical comedy that she is tasked with doing left us wanting more.

Andrew Shore's Dulcamara opened his big entrance aria, Udite, o rustici, with a wide, unruly vibrato, possibly for comic effect, and proceeded to have ups and downs in the aria as well as in the production as a whole. Genuinely funny moments alternated with others of approximate Italian diction and rushed words. Dulcamara's singing also occasionally found itself out of step with the orchestra.

The best moments of The Elixir of Love took place in some of the duos. The silly conversation in which Belcore explains to Nemorino that a soldier's life is full of joy and excitement was propelled by a genuine musical pulse. While Haji's Nemorino draws long, lyrical lines about finally being able to impress Adina in Ai perigli della guerra, Bintner's Belcore goes at him in irreverent rapid-fire notes of Del tamburo al suon vivace, tra le file e le bandiere. Similar contrast takes place a bit later in the duo between Adina and Dulcamara.

The singer who inhabited his role most naturally was Haji. He played Nemorino earnestly, not for laughs, and the laughs came easily. He delivered one of the most famous tenor arias of all time, Una furtiva lagrima, smoothly and without fuss. There are many Nemorinos in his future, and perhaps the challenge ahead for him is avoiding being typecast as a bel canto tenor exclusively.

The COC Orchestra under Yves Abel made Donizetti's music shine intermittently. The Elixir triangle, Haji, Bintner and Osborne, are all three past COC Ensemble graduates, and it's heart-warming to see an alma mater opera house so proud of its young artists to cast them in a production all of their own. Each of the singers has a productive career ahead. Just not as much, one hopes, in light-fare Donizetti.

The Elixir of Love continues in Toronto until Nov. 4 (coc.ca). 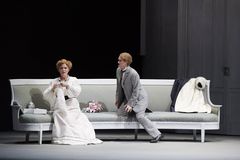 Mirvish delays Muriel’s Wedding, adds three new shows
September 25, 2017
Follow us on Twitter @globeandmail Opens in a new window
Report an error Editorial code of conduct
Due to technical reasons, we have temporarily removed commenting from our articles. We hope to have this fixed soon. Thank you for your patience. If you are looking to give feedback on our new site, please send it along to feedback@globeandmail.com. If you want to write a letter to the editor, please forward to letters@globeandmail.com.
Comments