Range is key to the Fall for Dance North philosophy. Now in its third year, the Toronto festival offers a sampling menu of top-quality international companies for the price of going to the movies. I'd be lying if I pretended that it hasn't warmed my heart these past years to hear an almost raucous, sold-out Sony Centre cheering and hollering for the likes of contemporary ballet, First Nations' hoop dancing and classical Indian Bharatanatyam. If you want to refine your taste in dance, the thinking is you'd better try a bit everything.

This year, in honour of the sesquicentennial, the festival is presenting three distinct programs with content either made or performed by Canadian artists. Funnily, it's been the Canadian material that's impressed me most in previous seasons: Ballet BC performing the dynamic and mesmerizing Twenty Eight Thousand Waves by Brazilian choreographer Cayetano Soto, Crystal Pite's moving A Picture of you Falling, excerpts from Aszure Barton's surprising and affecting Awáa.

I caught Program 1 on Wednesday night and hesitate to confess that it isn't the festival's strongest year; rigorous criticism is a bit like missing the spirit of FFDN and only seems apt because the quality has been so fine in past festivals. Still, even when there wasn't technical or artistic excellence on stage, there was jubilance and energy.

One of the centrepieces of the program was Children of Chaos, an FFDN commission of a seven-dancer ballet by National Ballet of Canada choreographic associate Robert Binet. The dancers are all Canadian expats from some of the finest ballet companies around the world. The 20-odd-minute piece is set to the live, inventive accompaniment of pianist John Kameel Farah. I was excited by the stylized beginning of the work, which had the dancers emerging from the shadows into prisms of light and moving swiftly around the piano through an array of configurations. Binet is great at making several interesting compositions happen at the same time, while having them feel both discrete and interconnected. There was a sharpness and angularity to the choreographic mood that felt new for him, while the dancing was charged with the mute, almost spiritual, power that makes his work stand out. But as the piece progressed, he started to introduce dramatic moments that felt arbitrary – a dancer struggles to get up onto her pointe shoes, another starts to melt and slink into his plié. What had seemed like an abstract piece became replete with internal conflict and half-relationships that felt freighted with meaning we simply couldn't access.

Montreal-born choreographer Eric Gauthier has made a name for himself in Europe with his Stuttgart-based contemporary ballet company, Gauthier Dance. They performed Violoncello, a pas-de-deux by Spanish choreographer Nacho Duato set to Bach's Cello Suites. The piece stood out on the program for its conceptual clarity: a man in a baroque wig "plays" a woman as though her body were a cello. Gimmicky but still delightful, the piece showcased Sandra Bourdais's elastic grace and muscularity – though I do wish there'd been an element of subversion in the spectacle of a fully-clothed man manipulating the body of a less-clothed woman who purported to be an instrument. There was certainly more feminist power on display in the dynamic Follow Me by Mix Mix Dance Collective, a group of diverse women who meld street and club styles into their own irreverent aesthetic.

The program also included a 2007 work, The Four Heavenly Kings, by Canadian choreographer William Yong, which featured dramatic Japanese taiko drumming by the Toronto-based Nagata Shachu and some interesting, muscular floor-work by the four male dancers. Les Ballets Jazz De Montreal showed off their campiest side with O Balcao de Amor by Israeli choreographer Itzik Galili, a theatrical ensemble piece that skewers the age-old battle of the sexes.

It surprised me that the most satisfying and emotional work of the evening was a Canadian version of American Charles Moulton's 1978 Precision Ball Passing, a postmodern experiment that uses 72 local volunteers seated and standing in a tiered block-formation. Billed as "part dance, part game, part living puzzle," the work has toured to all kinds of communities and settings, and I was expecting it to be more interesting and "eventful" than a complex and moving work of art. But it was both of these things and more. As the volunteers pass balls amongst themselves and perform simple, repetitive gestures, we get a poetic glimpse of the individual and the group, of the tension between structure and contingency, and it was invigorating to hear the 3,000-strong audience cheer the often breathtaking effect of collectively made shapes. 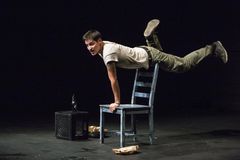 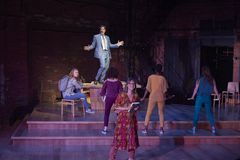