You've got to be curious about a play that British monarchists have condemned as "obnoxious swill" and "vile tosh." At least, those were the insults deployed by a dyspeptic Daily Mail columnist while trashing last year's BBC television adaptation of Mike Bartlett's King Charles III.

As it turns out, Bartlett's 2014 play is neither vile nor obnoxious. After all, it was a success in London and on Broadway. But seeing it now – in an admittedly dreary production by Toronto's Studio 180 Theatre – this mock-Shakespearean "future history" about Britain's current Royal Family feels like a novelty that has already passed its "best before" date.

Indeed, the present has caught up with its imagined future in one regard – Prince Harry's recent engagement to Meghan Markle – and spoiled one of its major subplots, which portrays the prince as a still hard-partying "singleton." To remedy that, Bartlett has done a hasty rewrite, introduced here, which claims the Harry-Meghan marriage failed and has left the prince single and partying again. It's an obvious quick fix that rings false and also seems a bit unfair to the real, much-in-love Harry and Meghan, who are only now making plans for their fairy-tale wedding.

Then again, Bartlett might argue that the Windsors he gives us onstage aren't the real ones, but characters from a kind of royal fan fiction. He's riffing on the public images of the family, speculating on their private motives and giving them Shakespearean dimensions. Harry recalls the rebellious Prince Hal of Henry IV, roistering with the commoners, while – in the most amusing and inspired twist – the demure Duchess of Cambridge, Kate Middleton, turns out to be an ambitious Lady Macbeth-type secretly scheming to put her husband, William, on the throne.

Then there is William's father, the elderly Prince of Wales, who, upon the death of Queen Elizabeth II, has become the newly minted King Charles III – a long-time sovereign-in-waiting now bent on wielding his sceptre. The real Charles is known for his strong opinions and some minor meddling in government affairs, but Bartlett's goes much further. One of his first acts as king is to exercise a long-disused royal right and refuse to endorse a privacy bill by the ruling Labour Party. When the government retaliates with a proposal to limit his power, he responds by employing another royal prerogative, dissolving Parliament.

Before long, there are protests in the streets, panic at 10 Downing Street and a tank parked in front of Buckingham Palace. Adding to the turmoil, Prince Harry has fallen for Jess, an anti-monarchist art student, whose past indiscretions – in the form of a texted nude photo – have become front-page tabloid fodder. Ironically, the bill that Charles has refused to sign on principle would have restricted the media from using the photo.

Bartlett has written the play in Shakespearean blank verse, sometimes to wittily incongruous effect. He also gives us a Shakespearean ghost in the form of Princess Diana, who haunts both Charles and William and predicts their place in history.

We're meant to laugh at some of this, but also to ponder the purpose of the monarchy as it faces the 21st century. Certainly, we're meant to feel for the well-meaning Charles and his wish to be a monarch who is more than just a smiling figurehead. Studio 180's production, however, doesn't move us as either comedy or drama. Joel Greenberg's direction is ponderous and, despite a cast largely recruited from the Shaw Festival, the acting is mostly disappointing.

We aren't expecting full-on impersonations, but often the actors don't even convey the essence of the real people they portray. David Schurmann feels completely wrong as Charles, playing him as though he were a cranky Canadian. Jeff Meadows has none of William's boyish appeal. Wade Bogert-O'Brien's ginger-haired Harry and Rosemary Dunsmore as Camilla, the Duchess of Cornwall, offer better facsimiles, but only Shannon Taylor has real zest as the unexpectedly Machiavellian Kate.

Among the fictional characters, there are good if unremarkable performances from Gray Powell as the vexed Labour PM and Patrick Galligan as his devious Conservative rival. Although you wonder why Bartlett, projecting into the future, couldn't imagine another female British leader à la Theresa May. Jessica Greenberg, meanwhile, is a charmless Jess who shows us no evidence of why Harry would fall for her.

John Thompson's dull set design, involving a minimal Elizabethan platform stage and some murky projections, adds to the show's general lack of imagination. I left the play envying that Daily Mail reviewer who could get so worked up about it. I felt only supremely indifferent to the fate of Bartlett's fictive royals.

Meghan Markle, Prince Harry and the new play that is tone deaf to diversity
September 29, 2017 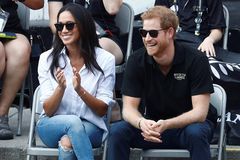 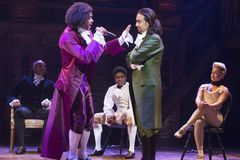