As if zooming into town riding the wave of the zeitgeist, Hot Brown Honey arrived in Vancouver this week; a raucous celebration of women, in particular Indigenous women and women of colour, complete with shout-outs to Oprah.

On opening night at the York Theatre, the hive of six performers smashed the patriarchy and celebrated female sexuality with hula hoops, bare breasts and strategically placed cat-face pillows; as well as empowering shouts from the stage: "Decolonize! Moisturize!"

The show from Australia – and an Edinburgh Fringe Festival hit – is a sort of burlesque cabaret with a dance-club vibe and a message, each segment showing off the talents of these women (they can shake it, they can belt a tune, they can beatbox), but always with a point. It is blissfully irreverent entertainment meant to galvanize, with the performers raising the middle finger to the man.

This is not a quiet night at the theatre – earplugs are provided – and the feminist message comes through loud and clear. (The women also swear like sailors, be warned, and there are mature themes; the recommended age for attending this show is 16 and up.) As the night begins, raffle tickets are sold to raise money to help care for the children travelling with the women in the group who are mothers. "The revolution cannot happen without child care," we were told. Amen, sisters.

The performers are fierce and terrific. In addition to Bowers (the show's co-creator, writer, musical director, composer and sound designer), they are: Lisa Fa'alafi (The Game Changer), Ofa Fotu (The Myth Slayer), Hope Haami (Hope One, a spectacular beatboxer), Crystal Stacey (The Peace Maker) and Elena Wangurra (The Ground Breaker). You watch in awe – wanting to befriend them, wanting to be more like them, wanting to be a better version of yourself because of them.

Fa'alafi co-created and wrote the show with Bowers; she also directs and choreographs. And she is responsible for the production design and, with the exception of one number, the ingenious costume design. (Honestly, the costumes alone are worth the price of admission.)

Hot Brown Honey is a celebration of sexuality, with special attention played to the "swimsuit region," some gigantic bouncy-ball boobs (juvenile, but I laughed) and confetti orgasms. I must admit that I felt a bit uncomfortable during a couple of segments where audience members were brought up to the stage and thrown into the provocative mix. But maybe I'm a prude. Maybe I need to lighten up. Or maybe the show would be just as good – better, in fact – without that stuff.

The most powerful moment of the night was an aerial ballet in defiance of domestic violence; Stacey gave me shivers as she flew through the air on her silks, wounded and vulnerable in her utilitarian bra and underwear.

But mostly we laughed, whooped it up, hollered slogans back and forth. My voice was hoarse by the end of the fast-paced, 75-minute show.

Is Hot Brown Honey a profound work of feminist theatre? Not really. Is it empowering, exuberant, rousing, fun? Hell, yes.

It's also the show that the world needs right now – has needed for some time, but man, the time is ripe for it. As the Honeys say: "The age of entitlement is over, bitches."

At the York Theatre in Vancouver until Jan. 27 (thecultch.com). 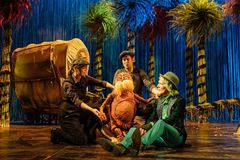 Theatre Review
Review: Severn Thompson’s Peter Pan does the classic tale proud, but could use some tinkering for adults
December 13, 2017 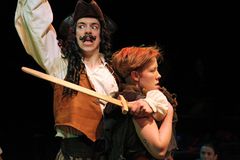 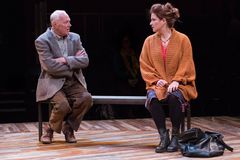