Johnny (Rooster) Byron is an ex-daredevil drug dealer who sells cocaine to teenagers and parties with them at his trailer in the woods on the edge of a fictional town in the English county of Wiltshire. A modern-day Falstaff, he's the unlikely hero of playwright Jez Butterworth's profane and problematic Jerusalem – an exploration of the place of English identity in an increasingly bureaucratic and homogenous world, now getting a raging Toronto premiere directed by Mitchell Cushman.

This sprawling Broadway and West End drama needs a star at its centre to work – and Kim Coates, the Saskatoon-born actor best known for his work on the FX show Sons of Anarchy, is taking on the challenging role here after a 25-year absence from the stage.

This type of casting always rolls my eyes, but Coates quickly shows he hasn't lost his live-performing chops in the decades since he got rave reviews as the psychopathic Roma in Brecht's The Resistible Rise of Arturo Ui at the Stratford Festival back in 1986.

The Globe and Mail's Ray Conlogue marvelled, back then, at the "pent-up violence" and "syrupy sentimentality" that Coates displayed as Roma – and these are attributes again on display 30 years later in his complex portrayal of a character both lovable and loathsome.

Coates's Rooster first struts out from his trailer, hands cocked at his side like a pair of guns about to be drawn in a shootout – and goes about an outrageous morning-hangover routine in silence. This involves dunking his head in a bucket of cold water and then downing a concoction made up of vodka, milk and a raw egg while smoking a spliff. (The vodka in director Mitchell Cushman's production is fake, I expect, but the egg is clearly real.)

When aging hanger-on and aspiring DJ Ginger (Philip Riccio) shows up shortly thereafter, Rooster's gift of the gab starts to become apparent – and Coates is marvellous keeping a steady stream of teenage visitors enthralled with his tall tales about giants and ogres (and cheap "whizz") in this play that takes place from dawn to dusk on St. George's Day. (One of the play's primary sources of humour involves Ginger fact-checking obviously confabulated stories – and Riccio, despite having an English accent with its own special postcode, is a gas in the part.)

There are two main plotlines threaded through Jerusalem: One concerns the local council's demands that Rooster leave the woods by 6 p.m. or be forceably removed; the other concerns a missing 15-year-old girl named Phaedra, last seen in the vicinity of Rooster's trailer.

Jerusalem initially seems a holdover from the in-yer-face movement that dominated new English theatre in the 1990s – packed with that country's particular brand of druggie humour and unique embrace of the c-word. But Butterworth has also stuffed his play with a steady stream of references to poetry, legends and folk tales. If you're looking for a Canadian comparator, it's like a literary Letterkenny – or a bookish Trailer Park Boys.

Rooster's a lost knight of King Arthur's round table, the pied piper of Hamelin (as told by Robert Browning) or St. George. Or perhaps the maiden-stealing dragon St. George slew. The play's title itself comes from William Blake's 1808 patriotic poem, later transformed into the lyrics of England's unofficial national anthem: "I will not cease from Mental Fight / Nor shall my Sword sleep in my hand/ Till we have built Jerusalem / In Englands green & pleasant Land."

Since I first saw Butterworth's opus in 2011 in New York, the play's taken on an entirely different flavour thanks to Brexit – and the rise of illiberal populism around the world. Cushman has explicitly moved the play to now to capitalize on that – so Davey, a high-school dropout who works at the local abbatoir and whose motto is "shag on," now wears a green shirt that reads: "Vote Leave/Take Control." Played endearingly by Peter Fernandes, he's a hyperlocal patriot who says he "doesn't see the point of other countries."

While the xenophobia of Davey's world view is softened by the casting of an actor of colour in the part, Jerusalem's romantic take on isolationism and nationalistic nostalgia is easier to resist now than it was not long ago. So too, Butterworth's dark but still dreamy depiction of a grown man partying with teens, though the underlying question is still compelling: Who should we fear – the weirdo in the woods, or those who hide behind a veneer of respectability?

Ultimately, Jerusalem triumphs as pure theatre of the kind we rarely see written in a contemporary voice – a three-act, two-intermission play with a cast of 14 that reminds you how exciting that is. With actors such as the Shaw Festival's Diana Donnelly and the always impressive Jason Cadieux showing up for short but impactful scenes, it feels like a deluxe experience in this beautifully designed production – with only a few moments where energy flags over three hours. Nicholas Campbell brought me to tears with his strange character – known as the "professor" – who wanders the woods looking for a lost love. Another real standout is Coates's daughter Brenna Coates as a promiscuous teen named Tanya – she gets everything right about a character that could be a cliché, giving this thick drama a great second Coates.

‘Once the play starts, stand back’: Jerusalem hits Toronto
February 6, 2018 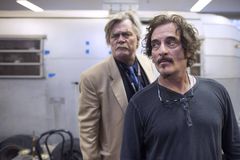