Assassination is not a solution to a problem. It’s only the beginning of more unpredictable problems.

It’s not remotely difficult for a Canadian to understand this lesson of Shakespeare’s Julius Caesar right now, after the recent U.S. killing of General Qassem Soleimani and the unexpected, tragic events that followed and touched us so closely.

A new modern-dress production of the Roman tragedy, stacked with major Stratford and Shaw Festival stars and helmed by Siminovitch Prize-winning director Chris Abraham, is now on in Toronto.

And it’s certainly hard at this particular moment in time to get on board with the conspirators Brutus (Dion Johnstone) and Cassius (Moya O’Connell) as they plot to murder Julius Caesar (Jim Mezon) without a clear plan to deal with the popular fury that will follow.

But Abraham’s production doesn’t expect us to do so. Johnstone, returning to Canada after his Broadway debut in King Lear last spring, gives us a Brutus who definitely thinks he’s the noblest man in the room, but is, clearly, naive from head to toe.

Meanwhile, O’Connell’s curdled Cassius is transparently motivated by hate and self-hatred (an intriguing note of internalized misogyny coming with the character’s gender flip.)

By contrast, the deep anger of Marc Antony, Caesar’s right hand man, in the wake of his friend’s death is at least understandable.

In a roaring, resonant performance, Abbey starts off acting Antony as one of his trademark galumphing thick-necks, drunk and screaming swear words at the Lupercal festival in a tracksuit. But then he transforms him into a man whose grief is both unexpectedly reflective and powerfully frightening.

His strongest speech isn’t the famous one he gives at Caesar’s funeral, but the dreadful curse he pronounces in the scene immediately before.

Antony chillingly prophecies an Italy where “blood and destruction shall be so in use / and dreadful objects so familiar / That mothers shall but smile when they behold / Their infants quarter’d with the hands of war.”

It’s amazing how adaptable Shakespeare really is. A few weeks ago, I would never have thought I’d walk into Julius Caesar and see any connection between the senators who slay Caesar without thinking it through and the current American President.

Indeed, the tendency in recent productions (such as the one in 2017 at Shakespeare in the Park in New York that was disrupted by hecklers associated with the far-right Canadian site The Rebel) has been to do the opposite, and imagine the title character as a Donald Trump-like figure.

But while Abraham’s production is definitely in conversation with our age of populism, it doesn’t draw any simplistic parallels – and, in fact, seems designed to destabilize siloed certainties.

The director reads the play, first and foremost, as a cautionary tale about humans who live in bubbles, the most dangerous one being to believe yourself above your animal nature.

This first half of Abraham’s in-the-round production is full of frenzied and feverish thinking and in-their-head performances from Johnstone and O’Connell in cages and corridors created by rolling fences and bars of fluorescent light (the designer is Lorenzo Savoini); the second sees them scampering in the open, frightened beasts with no shelter in a storm.

Throughout, Abraham has actors appear on the sidelines in giant mascot heads, half-bulls, half-bears and half-lions, to emphasize the thin line between civilization and a zoo. (This is also a sly nod to supernatural appearances of animals in Rome in the play.)

The downside to the concept behind Abraham’s production being so clear is that it sometimes flattens the play itself. The constant whispery airlessness of the conspiracy scenes grows tiring; the shouting in the second half sometimes strips the language of its meaning.

The production feels long – and, indeed, while Julius Caesar is one of Shakespeare’s shorter tragedies, it clocks in at three hours with the intermission here.

Part of that is due to added material credited to Zack Russell. This co-production between Crow’s Theatre and the Groundling Theatre Company begins with a prologue in which a group of internet radio hosts (one of a couple of nods to Robert Lepage’s recent production of Coriolanus at Stratford) chit chat about the feast of Lupercal that opens the play and some of the historical events that precede its action. This provides welcome context and immediately sets up the tense atmosphere of a society divided.

But a genuinely artful addition is a disconcerting epilogue where the characters come back to life and try to articulate what, if anything, they learned from all the intrigue and bloodshed. It’s a haunting, ambiguous ending to a raw upending evening. 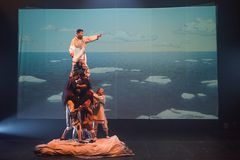 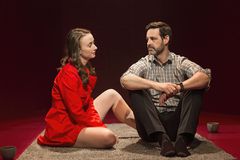 Review
Bend It Like Beckham: The Musical may not be major league, but it still has the emotional kick to send your heart aloft
Subscriber content
December 20, 2019 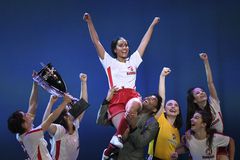