Kiviuq Returns: An Inuit Epic is back in Toronto for a month-long run at Tarragon Theatre after a notable one-night stand here a year and a half ago.

Last week, I made my own return journey to this charming collective creation from the North and then another to Damien Atkins’s solo show about UFOs, We Are Not Alone, at Crow’s Theatre, to see how these productions had changed since I originally reviewed them in 2017 and 2015, respectively.

Performed in Inuktitut, Kiviuq Returns – a creation of Nunavut’s Qaggiq Collective – is based on the stories of a legendary Inuit hunter who traverses the Arctic in his kayak, surviving eerie adventures with shape-shifting animals.

If you enjoyed watching Stephen Fry recount the ancient Greek myths at the Shaw Festival last summer, this is a crucial companion piece. Kiviuq is a Homeric hero of the high latitudes, a character whose mythic journeys are recounted from Alaska to Greenland.

Kiviuq Returns has a new director now (Laakkuluk Williamson Bathory) and a few new cast members, but it remains as eye-opening and entertaining a theatrical reclamation of these fantastic (and often bawdy) tales once banned by missionaries and the Canadian government.

This time, the most affecting section for me was the one in which Kiviuq forces a fox woman (Avery Keenainak) into marriage. The hero first spies this tiriganiaq in human form when she removes her fur to dry it by the fire – where he snatches it and holds it hostage until she agrees to marry him.

“Look at me, I’ve become human – I don’t want to be this way,” she sings to him, in a song written by Keenainak and Abraham Etak. “In my own heart, I am a fox. I can’t breathe. I want to have my own life. Why can’t you understand?”

The story may be very old, but this version seems a poignant parable about colonization. It then, as many of the tales do, turns comic – as the hunter gets his comeuppance when a den full of other less attractive animals try to seduce him in turn.

In this scene, Kiviuq is played by Christine Tootoo, whose delightful performance continues to have a playful porousness, but elsewhere, he is played by other male and female actors who are passed a heroic headband and invisible kayak paddle. The program notes that there are no gendered pronouns in Inuktitut.

The program also includes a descriptive guide in English that audience members are encouraged to read “before, during and after the viewing.” Most of the show is easy to follow even without fluency in Inuktitut, due to the simplicity of the narratives and physicality of the performances, though sometimes nuances are lost – as when, for instance, a young, bullied orphan is transformed into a vengeful seal when her head is dunked into a “piss pail.” (When I first reviewed the show, I innocently thought she was being immersed in water.)

I’m sympathetic to the ideological reasons behind the Qaggiq Collective’s decision for not including surtitles or a few lines in English. They want audiences in the south to let Inuktitut wash over them and have us consider "the space it has always taken in this place called Canada.”

On a practical level, however, I found flipping through the program during the brief moments that the house lights came up a frustrating half-measure. I still would prefer the accessibility of surtitles for the text-heavy scenes, such as the recitation of the Sea Woman poem (written by Taqralik Partridge) or the video footage of the elders from whom the collective gathered the tales.

It was harder for me to put my finger on what had changed in We Are Not Alone since it premiered in Montreal four years ago, but it remains a welcome opportunity to spend some time alone with Atkins – one of the country’s most engaging actors – plus some otherworldly lighting from designer Kimberly Purtell.

The semi-documentary play has three main sections. In the first, Atkins puts on a variety of B-movie voices and takes us through some famous 20th-century close encounters. He’s convincing in his adamancy that unidentified flying objects do exist – the only question is whether some are of extraterrestrial origin.

In the second part, Atkins heads down to a UFO convention in Arizona with his co-director Christian Barry (from Halifax’s 2b theatre) and is thoroughly weirded out by his encounters with self-proclaimed “experiencers” who claim to have encountered aliens and, in some cases, sasquatches, too.

This section of We Are Not Alone has acquired new resonances since I first saw it in Montreal at the Segal Centre, in part because conspiracy theories – beliefs that the (Canadian, American, world) government is hiding things from us – have become scarily mainstream. The crop-circle crowd seems tame by comparison, but I felt less comfortable going along with this type of mindset just for fun.

Then, there’s the scene where Atkins finds himself sitting in on a group of mostly female “experiencers” telling their stories of traumatic encounters with aliens – a situation that complicates the general principle that one should believe survivors. Atkins hasn’t really updated the show to consider the implication in the wake of the #MeToo movement.

Instead, the main idea of the show remains philosophical. Atkins relates the extraterrestrial question to an existential one all humans wonder: Am I special, or am I but a grain of sand? Are we alone and singular, or just one form of intelligent life out of many (and maybe a bit backwards by comparison)? “Experiencers,” Atkins smartly observes, bridge these human ways of thinking, and have found a way to feel like exceptional beings while at the same time believing that humanity is unexceptional in the universe.

Atkins’s on-stage persona is an interesting paradox as well – an everyman who also knows how to hold a crowd in the palm of his hand. The attempt to add a personal emotional journey into the play’s third section is the only thing that doesn’t entirely work. The character he has created out of himself is too aloof; we don’t really ever understand why UFOs interest him enough to make a show about them, which remains a serious flaw in a play surrounded by an exceptional performance. 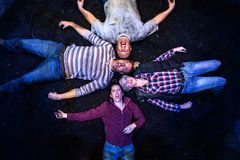 Theatre Review
Review: Irreverent Iphigenia and the Furies an electric take on Euripides with a strong cast
Subscriber content
January 11, 2019 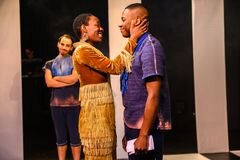 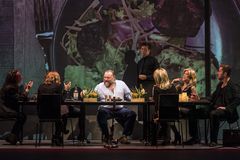