The title of Catalyst Theatre’s muscular new musical – Invisible! Agents! Warfare! – sounds vaguely Marvelesque, and really what’s not to like about that?

The Invisible – Agents of Ungentlemanly Warfare, which had its world premiere Thursday night in Calgary, stirs up echoes of a few of the better recent superhero screen stories, as it tells – in its own uniquely musical theatre vernacular – the story of an Allied squad of fearless, heroic women who drop behind enemy lines during the Second World War in order to sabotage the Nazi war effort.

This show takes a dash of Captain America, a dollop of Agent Carter, and a fistful of Wonder Woman, and adds the sensibility of Bob Fosse, the late, great director of Cabaret.

Well, Bob’s gone – but not, in designer Bretta Gerecke’s sleek and evocative set design, which seemed to take inspiration from that of Cabaret and had me waiting for Joel Gray to slither onstage, forgotten.

In fact, Mr. Fosse’s vision has given rise to a whole new generation of musical theatre makers such as Jonathan Christenson, who wrote the book, lyrics and music to The Invisible – and about 22 other musicals before that, some of which (Nevermore, about young Edgar Allan Poe), have made it all the way from Edmonton, Catalyst Theatre’s home base, to London’s West End and Off-Broadway.

It might be all new songs, but Mr. Christenson’s musical score feels pulled straight from a Second World War greatest hits playlist – some Édith Piaf here, some Kurt Weill there, some Vera Lynn over there – as it weaves a narrative around the half dozen secret agents forming a team of female spies who go behind the lines to help in the war effort, where it is thought that women can blend in more seamlessly with civilians in occupied France.

It’s all inspired by the real-life Special Operations Executive (SOE), a group of 13,000 special agents (3,200 women) created during the war to attack Axis powers through indirect means.

The first act of The Invisible is pretty expository and ensemble-oriented. It’s the boot camp part of every war story, really – remember Full Metal Jacket? – where the team gets recruited, meets and transforms itself.

Here, that means cloistering on the Isle of Coll up in frigid Scotland, singing a song where the refrain involves each character chanting her particular specialty, things such as “Decoder!”, “Explosives!”, “Sharpshooter” and “Seductress!”

As a storyteller, Mr. Christenson has a few superpowers – his melodious musical hooks, designer Gerecke’s set and costumes, and Laura Krewski’s evocative choreography.

There’s also a tasty dash of multimedia, with projected images (by Jeff Osterlin) that flash snippets of wartime lyrics and maps of London, showing the locations of bombing attacks across the city, all of which provide just the right doses of screen time, rather than overwhelming the non-digital talent onstage.

Catalyst shows that I’ve caught in recent years (Fortune Falls, Nevermore) tend to look gorgeous, sound great and have almost no story – and this one takes a while to get into gear, too, but by choosing to tell a tale about female spies during the Second World War, Mr. Christenson smartly plugs his stylish musical sensibility into a world that contains life-or-death cliffhangers the way most of our days contain breakfast.

That becomes most apparent in the second act, when The Invisible jumps into full action thriller gear, telling the story of the women, now relocated to France, plotting to blow up a tunnel – and that’s all I’ll say.

The ensemble chorus of the first act gives way in the second act to some powerful solo turns, in particular Ms. Gillis, as Anna Shakhova, who delivers a powerhouse moment that brings home the sacrifices made by these invisibles, and all the other invisible women who made huge – and largely uncredited – contributions to the war effort.

The Invisible continues in Calgary through June 9. 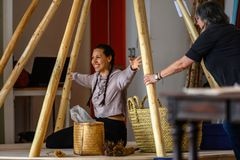 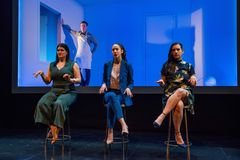 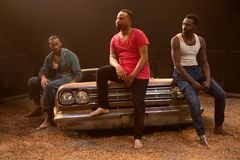