In the most startling scene of the new circus-theatre hybrid Unikkaaqtuat, an Arctic ice floe, as comically overloaded as a clown car, tips, and the men and women crowded onto it suddenly topple, terrifyingly, into the frigid sea.

Underwater, two women (Charlotte Qamaniq and Christine Tootoo) float upside down - they’re actually swinging from hanging fabric – and throat sing in what sounds like a melancholy acceptance of their fate.

But another woman (Marjorie Nantel) fights her drowning in a desperate, struggling acrobatic routine on the hanging silks. Ultimately, she ends up suspended, doing the splits high above the stage.

Cue shock and applause from the crowd at the show’s world premiere at the National Arts Centre’s new Indigenous Theatre in Ottawa on Thursday.

There’s a story to this aerial act, that of the woman’s transformation into “the mother of sea mammals,” just one of several sea changes suffered in the Inuit myths that are the inspiration for this unprecedented North-South artistic collaboration.

Artcirq of Igloolik, Nunavut, and Montreal’s The 7 Fingers are the two circus companies joining forces here, along with an Arctic film company called Taqqut Productions, which has created the show’s eerie backdrops by animating drawings from award-winning Yellowknife-based illustrator Germaine Arnatauyok. (You may know her as designer of the toonie that commemorated the founding of Nunavut.)

In scenes such as the drowning and rebirth described above, Unikkaaqtuat – an undoubtedly ambitious and original effort that will tour to Nanaimo, B.C., Vancouver, Canmore, Alta., and Yellowknife – has cultural practices collide to create a compelling new whole.

The show features the matter-of-fact mix of humour and horror that I’ve come to associate with Northern and Inuit culture through an exciting explosion of recent touring productions, such as Kiviuq Returns (by the Qaggiq Theatre Collective) or the Dora Mavor Moore-winning Kiinalik: These Sharp Tools.

And there’s also elements of the poetic physicality of the best French-Canadian cirque – with a hint of a broader, goofier clowning from that highly successful Quebec-based circus industry as well.

Other hybrid highlights include depictions of mythical beings that are either born out of the earth (with aerial tricks by Charlie Gordon, dangling on a rope that is also a huge umbilical cord) or become the earth (with stilt work and shadow puppetry, helping show the transformation of giants into mountains).

However, in other parts of Unikkaaqtuat, which often drag or feel haphazard in their overall pacing, story and spectacle bump up against each other less satisfyingly or pass one another like two ice floes in the night.

Meanwhile, designer Neil Christopher’s video and animation work, while attractive, is not always theatrical; it can feel like a movie projected behind the show rather than an integral part of it. The overall look of the show is an inelegant jumble and the lack of a single director to unify is felt.

There is a framing device to tie together the myths, however. A man named Levy (Levy Tapatsiak) has checked into a hospital with a stomach ailment that mystifies the medical staff, led by one Dr. Henriet (Gisle Henriet).

To pass the time, Levy listens to a cassette tape of the “old stories” (a literal translation of the title) recorded by an elder, and as he slips in and out of consciousness, he slips in and out of these fantastic worlds. The character’s overall arc ends abruptly, with a few hasty words from the doctor about the healing power of story. This conclusion deserves more thought and stage time.

Although there is some English dialogue in the hospital scenes, the myths are often narrated in Inuktitut. Those who don’t speak the language would be advised to brush up ahead of time in the lobby, where the myths are summarized on posters.

Some of Unikkaaqtuat will be hard to follow otherwise, although, as NAC Indigenous Theatre artistic director Kevin Loring said in his introduction on opening night, confusion is a part of any cultural exchange.

It’s hard to know how much of the lack of polish of Thursday’s performance comes out of a conscious desire to avoid assimilative artistry and embrace that confusion, and how much comes from the show being a work in progress.

In a CBC Radio interview a couple of days before Unikkaaqtuat opened, its creators admitted they wished they had a couple more weeks of rehearsal.

But while what’s here may not be as slick as your average show from The 7 Fingers – a troupe that, unlike its friendly competitor Cirque du Soleil, has always embraced letting its performers be themselves and has not been subject to the same criticisms of cultural appropriation – this is an attempt at something new, with many unusual images and physical feats that will linger in the memory.

Oh, and the live music is excellent – especially the soulful singing of the charismatic Joshua Qaumariaq, who at one point paddles across the stage in a kayak, serenading like some sort of Inuk gondolier.

Editor’s note: an earlier version of this article included an incorrect name for Taqqut Productions

2020 arts preview: Plan your next year in culture, from TV and film to music, theatre and visual arts Subscriber content
January 7, 2020 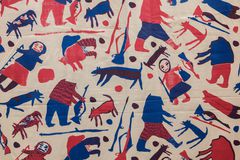 Opinion
The best of 2019 Canadian visual arts: an essential year of Indigenous work, at home and abroad Subscriber content
December 28, 2019 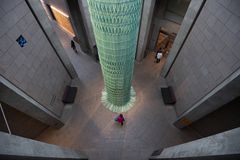