In recent years, Bob Dylan has made a hobby of sculpting with iron. He takes disparate found objects such as old tools, wheels and chains and, torch in hand, welds them into a new structure – as often as not, into gates.

Irish playwright-director Conor McPherson has done something similar with Girl from the North Country, his sublimely inspired musical based on Dylan’s songbook. McPherson has dug through the master songwriter’s cluttered back catalogue, hauled out 20 of his tunes – some familiar, some forgotten – and fused them into a whole new work. One that provides a fresh gateway into Dylan’s astounding artistry.

McPherson’s already lauded show – playing Toronto’s Royal Alex prior to its second engagement in London’s West End – is an intense Depression-era drama in which Dylan’s music serves as a strange cathartic outlet. Like the objects in those ironwork sculptures, the songs remain separate entities, but at the same time enhance the story. And in repurposing them, McPherson and arranger Simon Hale have found new aspects that may surprise even hard core Dylan fans.

It’s 1934 and we’re in a rundown guest house in Duluth, Minn. (Dylan’s birthplace), where the hard times are taking their toll. The owner, Nick Laine (Donald Sage MacKay), stands to lose the house to the bank. His unruly wife Elizabeth (Katie Brayben) is in the grip of mental illness, their son Gene (Colin Bates), a boozing wannabe writer, can’t get a job and Marianne (Gloria Obianyo), their adopted black daughter, is pregnant. Nick is trying to marry her off to an elderly but well-to-do cobbler (Sidney Kean). At the same time, Nick is pinning his hopes of escape on his secret lover, Mrs. Neilsen (Rachel John), a widow who is waiting upon a legacy from her dead husband.

Also boarding with the Laines are the bickering Burkes (David Ganly and Anna-Jane Casey), victims of the Wall Street crash, and their mentally challenged son Elias (Steffan Harri). Their lives, and those of the Laines, soon become entangled with a pair of new guests: Joe Scott (Shaq Taylor), a black boxer and ex-convict, and Rev. Marlowe (Finbar Lynch), a sketchy preacher and Bible salesman.

Just as Dylan’s music filches from earlier blues, folk and gospel tunes, McPherson’s play affectionately doffs its hat to early-20th-century American writers, from John Steinbeck and Eugene O’Neill to Thornton Wilder. Allusions abound, beginning with the Our Town-type narrator (the local doctor, played by a suitably sage Ferdy Roberts). There is also a direct borrow from Dylan himself, with a framed pugilist à la Rubin Carter, the subject of his ballad Hurricane (thrillingly sung by Taylor).

More often, the songs have an oblique relationship to the action. Sometimes performed in medleys and often as fragments, they’re like glimpses into other stories, other lives – other guests in this already crowded guest house.

The cast deliver the numbers directly to the audience, backed by a four-piece acoustic band. A few of the actor-singers also play instruments – recalling another Irish-born musical, Once – and at times the women gather to sing harmonies, Andrews Sisters-style, before a vintage microphone. Only, what they’re singing isn’t boogie-woogie but Dylan’s mysterious, biblical-themed Jokerman.

That’s just one of the startling reinterpretations of his work. Like a Rolling Stone, that searing saga of downfall, performed with unhinged abandon by Brayben, suddenly seems to be speaking directly about the Depression. So, too, the apocalyptic Slow Train. Hale’s slow-tempo arrangements bring out the aching emotion beneath the cascading imagery of a classic song, I Want You, and give you a whole new appreciation of a hitherto slightly regarded one, Tight Connection to My Heart.

The latter is sung with plaintive beauty by Obianyo who, along with Brayben and Taylor, may be the standout vocalist in the show. Then again, there are powerful performances all around from this Irish and British ensemble. (McPherson will be directing a separate U.S. cast for the musical’s Broadway debut this winter.)

The playwright, who first made his name with that spine-tingling classic The Weir, invests the drama with a sense of foreboding and, near the end, even includes a supernatural scene. Mark Henderson’s crepuscular lighting on Rae Smith’s folksy set adds to the apprehensive mood. Things are not entirely grim, however. The second act opens with a lively, foot-stomping singalong to the nonsensical You Ain’t Goin’ Nowhere. By then, we’re almost in danger of forgetting that Dylan has also written some pretty funny songs over the years.

But of course, this is not a retrospective. Like I’m Not There, Todd Haynes’s quirky Dylan biopic of a decade ago, it’s far less conventional and far more creative.

In his 2004 memoir, Chronicles: Volume One, Dylan wrote that, as a young man, “I’d always liked the stage and even more so, the theatre. It seemed like the most supreme craft of all craft.” With Girl from the North Country, Dylan’s own supreme craft, songwriting, has finally found its theatrical home.

Girl from the North Country continues to Nov. 24. (mirvish.com) 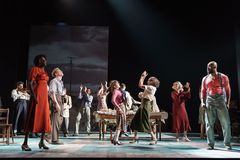