Constraint can be a great spur for experimentation. During much of her latest creation, Montreal choreographer Danièle Desnoyers obliges her seven dancers to move in contact with 10 knee-high black tables, configured in different ways by the choreographer and set designer Geneviève Lizotte.

At the start of this hour-long show, the tables are arrayed into two parallel ramps running toward the audience, with just enough space to walk between. The dancers crawl or slink along the ramps, torsos often leaning out sideways or even backwards. “Mind the gap” flashes across a screen, inviting us to think metaphorically when someone crosses over the gap, or slips down into it, as if drowning.

The scene is dimly lit from a lighting rig lowered to about the height of a normal ceiling. Ben Shemie’s rumbling ambient music shifts at the same slow pace as the dancers’ movements. The three women and four men change costumes in the shadows before each pass along the ramps, like models on a catwalk. That playful association seems unavoidable when two women sidle down the ramps in full-length satin gowns. Not many costume designers for contemporary dance work from as large a wardrobe as Angelo Barsetti does here.

The unstable leaning postures persist as the dancers begin to engage more with each other. True to Ms. Desnoyers’s title, the performers unfold the various implications of leaning into another’s body – for shelter or intimacy, to show dependency or dominance. A front-facing duet for two women, lit this time from the back of the theatre, looks both sensual and aloof; their wide-legged movements are lithe but also mechanical at times.

The dancers pull the tables apart, the lighting rig rises and the music intensifies. The tables reconfigure into a rectangle, with the dancers speeding around the edges in both directions.

The tables break apart again, slowly, like tectonic plates splitting the Earth, and a strange dance party breaks out in the empty centre of the space. The performers take turns doing a spasmodic, twitching movement, as if racked with anxiety at the loss of something solid to lean against. That loss eventually seems like an emancipation, via a pas de deux that revels in the physical lyricism that has surfaced in a halting way throughout the piece.

Unfold 1: 7 Perspectives is packed with material; when it was over, I could hardly believe that the whole work really had lasted only an hour. There’s a compelling logic to Ms. Desnoyers’s choreography, but it can also be excitingly ragged and wild.

Gonzalo Soldi and Hub Studio light the work in dramatic ways, often from a single direction. Their stark and powerful approach makes the space feel as dynamic as the choreography. Mr. Shemie’s varied electronic soundtrack usually matches the intensity of the dance, but sometimes overpowers it. Music, like movement, occupies space, and when the sound becomes very loud and aggressive, there seems little room for anything else.

Unfold 1: 7 Perspectives is a production of Carré des Lombes, the company Ms. Desnoyers founded in 1989. Thirty years is a long time in contemporary dance, and Ms. Desnoyers is still exploring, still inventing. She had a fantastic ensemble to work with: Myriam Arseneault, Paige Culley, Jean-Benoit Labrecque-Gilbert, Louis-Elyan Martin, Milan Panet-Gigon, Nicolas Patry and Brontë Poiré-Prest. Three performances, albeit within the frame of Festival TransAmériques, are not enough for this powerful new piece. 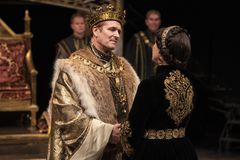 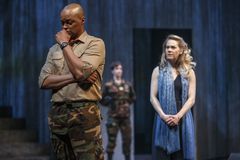