Timing is everything, they say, and this is certainly the case for The Party and The Candidate – world premieres which opened at the exact same time last week at Edmonton’s Citadel Theatre. They are as ambitious and complex a theatrical endeavour as you could imagine, with precision timing as a critical element. They also present a story about a political competition between a male and female candidate at a moment when another such political rivalry is very much on the minds of Albertans. These characters, however, are more inspired by Hillary Clinton and Donald Trump than by Rachel Notley and Jason Kenney.

But wait – don’t let that turn you off. This is an ingenious, audacious, fun and delightful concept that is worthy of high audience turnout – even if the execution isn’t always winning.

Citadel artistic director Daryl Cloran was inspired to stage two connected plays simultaneously after reading Alan Ayckbourn’s House and Garden – two plays that tell two sides of the same story in two separate theatres at the same time. Cloran went to Toronto-based playwright Kat Sandler (Mustard) with the idea and she was crazy enough – his phrasing – to agree to the challenge.

What they came up with is wild. Two shows with the same cast operating at the same time at two theatre spaces in complementary synchronicity means that when an actor goes off-stage in one show, he or she is onstage in the other. The plays are staged in the Citadel’s the Club and Maclab theatres – which happen to be the two furthest apart in this building. The route takes the actors up and/or down eight flights of stairs and at least eight doors, mostly through backstage hallways, but also with one sprint through a public area (there is a volunteer usher stationed outside the Second Cup who acts as a crossing guard during performances to keep the path clear). It takes about 70 seconds to make the dash, although it has been done in as little as 45.

“So, if we look out of breath, we probably are,” cast member Cynthia Jimenez-Hicks told the audience ahead of the performance of The Party last Saturday night.

Charts and stopwatches were employed throughout the creation process, stage managers are in radio contact by headset and actors have to be on their toes in more ways than one – because if a scene partner doesn’t make it to the stage on time, they’ve got to do some dramatic stalling. Spotting these moments is a huge part of the fun for the audience.

“I keep saying that there’s a lot of math involved and there’s also a lot of magic,” Cloran told The Globe and Mail, ahead of opening night last week.

The Party is set at a political fundraiser/birthday party for a rich old guy, Jebediah (Butch) Buchanan (Glenn Nelson), who will decide that night who to crown the leader of the Left party (because rich people have that much power).

In contention are Bill Biszy (Jesse Lipscombe) – the first black, openly gay action star of an aquatic franchise in the unnamed country – and the smart, tough, pantsuited Heather Straughan (Martha Burns). Straughan’s husband Cole (Kevin Bundy) was a candidate years ago, but his political career was destroyed in a sex scandal involving an Olympic ice dancer, Vidashka (Amber Lewis). Heather and Cole are Hillary and Bill Clinton-esque, while Vidashka displays an accent and taste for over-the-top clothing that is Melania Trump-like.

In The Candidate, the winner of the leadership race goes head-to-head in a debate with the leader of the Right – Jebediah’s equally evil identical twin brother. Then, a scandal erupts – on the night before the election. It is pure farce – packed with so many plot twists and laugh-out-loud moments that I could hardly catch my breath (and I wasn’t running between theatres).

The entire cast is terrific – especially Burns as Straughan, Colleen Wheeler as her f-bombing campaign manager, Lipscombe as the charming but dimwitted movie-star candidate, Thom Allison as his drag queen TV-star boyfriend, Lewis as Vidashka and Luc Tellier, who is a wonder as the naïve, fresh-faced political intern, Dill Pickerel.

I saw The Party first, on Saturday night, followed by The Candidate on Sunday afternoon. It can also work the other way – see The Candidate first and then get the backstory with The Party prequel, where certain things are explained. But the way I saw it is best.

Because The Candidate is a fantastic, fun-filled farce. And The Party – while enjoyable at times – suffers for the concept, dragging especially in the second act, no doubt to make room for the action-packed hilarity going on at the same time in The Candidate. The Party could use some serious tightening, but how do you do that without creating a monstrous domino effect on both plays? The Party is a casualty of the innovation.

Still, I loved the excitement of returning to the theatre, eager to spend more time with these characters and know what happened to them. (This Saturday, both shows are playing on the same day, so people can binge-watch it in a single day.)

If you are lucky enough to be in Edmonton this month: Run, don’t walk, to see these plays. Because the real winner is the audience. 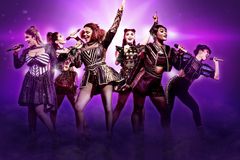 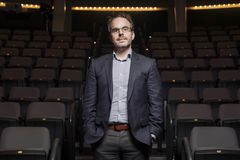 Edmonton’s Citadel Theatre apologizes for alleged harassment dating back to 1990s
March 14, 2018
Follow Marsha Lederman on Twitter @marshalederman
Report an error Editorial code of conduct
Due to technical reasons, we have temporarily removed commenting from our articles. We hope to have this fixed soon. Thank you for your patience. If you are looking to give feedback on our new site, please send it along to feedback@globeandmail.com. If you want to write a letter to the editor, please forward to letters@globeandmail.com.
Comments