“What if a star is not born?” the writer and singer Vivek Shraya asks in How to Fail as a Popstar. The answer, it seems, is: Well, there’s always Canadian theatre to fall back on.

Shraya, perhaps best known for her 2018 non-fiction book I’m Afraid of Men, has transformed the trials and tribulations of her real-life attempts in her teens and 20s to become a pop singer into a charming, if somewhat ambling, solo show now having its official world premiere at Canadian Stage.

Honestly and, for the most part, straightforwardly, she recounts how she was unable to even achieve the status of a one-hit wonder, never mind enter the stratosphere inhabited by idols such as Whitney Houston and Madonna.

Directed by Brendan Healy, the new artistic director of Canadian Stage, How to Fail as a Popstar has the feel of a slightly overextended segment on This American Life, punctuated by enjoyable electro-pop songs in which Shraya shows off the soaring, idiosyncratic voice that brought her to the brink of fame.

She gets pretty deep into the nuts and bolts of what it’s like for a young person to try to break into the music industry – or, at least, what it was like in the naughts. Presumably, MySpace doesn’t play as big a role any more and, I gather, neither do CDs.

Shraya begins with background, telling the audience about how she fell in love with music growing up in Edmonton in what she calls a “brown” family. She sang to please her mother first, then had her first public performances, singing bhajans – a type of devotional song – in honour of Sai Baba, an Indian multifaith guru.

Soon however, Shraya wasn’t singing to God, but to become one. The goals kept shifting. Stardom seemed attainable through Youth Talent Quest, a singing competition held at Edmonton malls. Then it seemed attainable with the help of a local producer who looked like Jim Cuddy – and who convinced her to take out a $20,000 loan to record an album that ended up sounding like generic Canadian rock.

Fame and fortune lured her next to Toronto and then to Paris, and Shraya isn’t afraid to name the names of colourful characters she met along the way.

I was born in 1981, same as Shraya, and the musical references in her story (which are also sampled in James Bunton’s excellent sound design) were a real listen down memory lane. Most people will know who Tegan and Sara are when they show up in the story, but I was tickled when Marcy Playground became a part of the narrative, and when a French producer told Shraya that she could be “bigger than Mika.” (Remember Sex and Candy? Or Grace Kelly?)

Failure is not exactly the taboo that it used to be. Samuel Beckett’s famous line “Fail again. Fail better” has been appropriated by tech entrepreneurs, while the Canadian director and dramaturge Sarah Garton Stanley (a mentor of Healy’s) has written an artistic manifesto for the consideration of failure that argues it “is simply one of the strongest agents for change the universe has to offer.”

Shraya’s show, however, does not get particularly philosophical about what failure is or what it means – and I do wish she had skipped out on some of the anecdotes in favour of a deeper exploration of the subject matter. A final segment where she lists 40 reasons she might have failed is a high point that considers the personal or political aspects that lead to “success."

The production, designed by Joanna Yu (set and costumes) and C.J. Astronomo (lighting), is minimalistic, but very stylish. Shraya performs, mostly, inside a circle formed by illuminated tubes that change colour and effectively lasso her engaging energy.

I wondered, however, about the slickness of the look of the show in relation to the not-always-polished acting by Shraya. Every so often, set off by a giggle in the audience, she would laugh at her own jokes – and try to stop herself. A production and performance that embraced these moments of failure by the theatrical newcomer, rather than tried to suppress them, might have been more thematically on point. 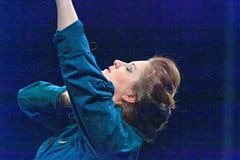 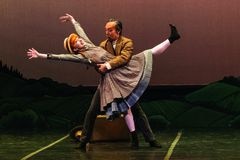 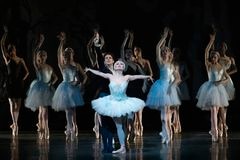