The Events is the first show mounted by Necessary Angel since Alan Dilworth, recently the acting artistic director at Soulpepper, became head of the independent theatre company that has been run by some of the country’s top directors over the decades.

Dilworth has delivered a production of this 2013 play by Scottish playwright David Greig that is skillful and soulful - but audiences will leave divided as to how necessary it really is.

The Events stars Raven Dauda as Clare, a priest who has survived a shooting that took place at a choir practice. Since the “events” in question, she has become obsessed by the perpetrator, known here only as The Boy.

Kevin Walker, his hair flattened and his body coiled, plays The Boy – but also most of the other people who Clare interacts with.

Under the direction of Dilworth, Walker slips from one character to the next without substantial changes to his body or voice; it is as if he is channelling characters rather than acting them in the traditional sense.

This may be off-putting initially, but it helps illustrate the depths of Clare’s obsession: She sees everyone and everything in the world through The Boy now.

Dilworth has both his actors deliver dialogue in a fast, flat, distanced way at first. It makes the play seem as though it is taking place from within Clare’s trauma and depression.

And yet there is life, uncontained and exuberant, in the show as well.

Each night, The Events is staged in front of and with the participation of a different community choir. On opening night, Toronto’s City Choir filled three rows of seats on risers on the stage.

This onstage chorus is, on one level, a nod to the choruses of ancient Greek tragedy.

But the choir also functions as a backdrop of humanity that renders the massacre in the play much more palpable and therefore hard to distance yourself from. (The show will, I imagine, have entirely different resonances when the Cantala Women’s Choir performs later in the run.)

There’s something moving in merely watching real people walk across a stage, with all their idiosyncratic gaits and fleshly vulnerability, to take their seats. It’s also a reminder of how stylized most acting is even at its most naturalistic: Dauda, who gives a deeply concentrated performance as Clare, moves with a purpose that immediately sets her apart; Walker, who is terrific, wanders on, all potential menace, then stands in the corner, apart.

The contrast between being and acting is what makes The Events a compelling show – and that is built into Greig’s script.

But while this formal experimentation may be fruitful, the scenes Greig has penned suggest a playwright searching for something to say about the unspeakable – and not having any greater insight on the subject than anyone else.

There are intermittent gestures at plot – a relationship falling apart, a revenge plan hatched. But Clare ultimately seems less a survivor than a surrogate for Greig as she launches her own investigation to find out if The Boy is evil or mentally ill by reading his blog, talking to his father or questioning the leader of a far-right political party he briefly joined.

This is well-trod territory. Looking back, I see that I have rarely given enthusiastic reviews to shows about such “events” – whether tackling real ones, as in Swedish playwright Lars Noren’s The 20th of November and Belgian playwright Carly Wijs’s Us/Them; or only inspired by them, as in English playwright Simon Stephens’ school-shooting drama, Punk Rock.

This could be a matter of personal (dis)taste. But the collective experience of seeing all those European plays put on by Toronto companies is of a theatre scene more comfortable looking at this subject from a distance, than directly examining what has happened here at a mosque in Quebec City or on Yonge Street sidewalks.

Perhaps that’s unfair as each of the aforementioned plays involves a playwright inspired by tragedy abroad for them: A Swede writing about a German shooting, a Belgian writing about a Russian siege, an Englishman imagining a English version of what is primarily an American phenomenon.

The Events, likewise, was partly a response to the 2011 far-right terrorist attacks in Norway that culminated in an assault at a youth summer camp and left 77 people dead.

I honestly don’t get Greig’s impulse to use his copious artistic talents to create a fictional similar incident in Scotland, which has been blessedly free of such massacres since Dunblane in 1996, after which both Conservative and Labour governments introduced gun-control measures. Something about it feels like evasion, even in a fine production like this. 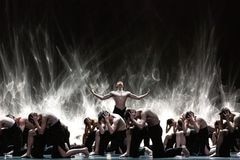 Review
This Sunday in the Park with George features musical-theatre MVPs - and a cameo by the DVP
March 5, 2020 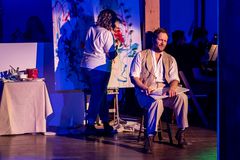 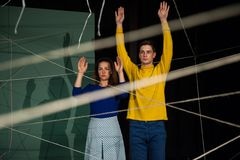