Stephen Adly Guirgis is a poetic and profane contemporary American dramatist whose plays have long been favourites of Toronto’s theatre critics and artists – but haven’t, until now, been on offer at the city’s mainstream theatre companies.

The indie company Birdland Theatre’s 2005-09 production of Guirgis’s The Last Days of Judas Iscariot was a universally acclaimed highlight of the first decade of this century, while the tiny storefront Coal Mine Theatre’s production of The Motherfucker with the Hat recently landed on Now Magazine’s list of the ten best shows of the last decade.

There have been other celebrated small-scale productions of Guirgis’s work in Toronto of late, but now he is making his debut at Soulpepper, the biggest not-for-profit theatre in town.

Artistic director Weyni Mengesha’s production of his 2000 prison drama Jesus Hopped the 'A' Train is an entertaining night at the theatre but in no way an easy one. His Shaw-with-swears style will not appeal to all.

By the end of the first scene, in which an imprisoned Angel Cruz (Xavier Lopez) attempts to pray in his cell and is shouted at by those around him, more F-bombs have been dropped than have probably been heard in every play produced hitherto in Soulpepper’s history; it’s a hilarious opening that then quickly turns harrowing.

Angel is a young Latino New Yorker who has been arrested for the attempted murder of Reverend Kim, the leader of a cult (with shades of the Unification movement, a.k.a. the “Moonies”) that has indoctrinated a beloved childhood friend.

When a public defender, Irish-American Mary Jane Hanrahan (Diana Donnelly), meets Angel at Rikers prison, he immediately confesses to the crime – although he does not realize he has done so.

Something about the mix of naiveté and violence and self-righteousness in Angel reminds Mary Jane of her father – and she signs up to defend the defensive, terrified man even though her awareness of his culpability puts her in professional peril.

This is not a drama primarily occupied with earthly justice, however, but divine justice.

For one hour a day, Angel – who is under protective custody after a brutal attack by other inmates and a suicide attempt – is permitted to exercise outside in a locked cage.

Lucius (Daren A. Herbert), an African-American inmate waiting to find out if he will be extradited to Florida to face the death penalty, occupies another outdoor cell during this time.

Born again in prison, Lucius is an extraordinary character who is also a great acting challenge. At one point, the religious convert recites all the books in the Old Testament, in reverse order, while strenuously exercising.

Herbert dazzles in that scene, and continues to impress in all of the verbal fireworks that follow – heady, tongue-twisting dialogue that rivals the patter he performed starring in The Music Man at Stratford Festival. A talented actor who can sometimes prioritize charisma over character, he is in total control here.

After Lucius tosses a cigarette over to Angel, the two enter into a series of conversations filled with streetwise slang but deeply serious about faith, taking responsibility for one’s actions and forgiveness.

Brought up Catholic, Guirgis is that rarest of off-Broadway playwrights, one with a fervent following among Jesuits.

When the agnostic Angel says that Lucius’s conversion in prison is awfully “convenient,” the latter replies, “Well God juss happens to be a very damn convenient individual, brother.”

Jesus Hopped the 'A' Train is skillfully structured so that the audience’s sympathies see-saw back and forth between the silver-tongued Lucius and a seemingly sadistic guard named Valdez (the strong Tony Nappo). I wouldn’t want to spoil that experience for any prospective theatregoer by saying too much about Lucius’s crimes – but, suffice it to say, as the first syllable of his name suggests, it is hard to see him as entirely on the side of God.

While Ken MacKenzie’s prison set is airy, Mengesha’s production is all about keeping energy contained in small spaces – even in the case of Mary Jane. As she delivers a series of monologues, a play unto itself in which her own road to you-know-where is paved with good intentions, her free character is trapped by Kevin Lamotte’s lighting; she, like all of us mortals, is stuck in her own prisons of mind and body.

Donnelly, a Shaw Festival veteran, is excellent – and Mengesha has discovered an impressive young actor in Lopez, whose final brave and foolish moments as Angel are deeply affecting.

But Herbert’s powerful, perverse performance is the one they’ll be talking about come Dora Mavor Moore Awards time. 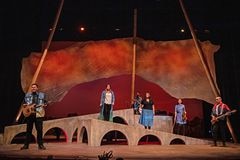 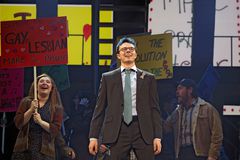 Review
This is How We Got Here at Native Earth is a down-to-earth drama about suicide and its aftershocks
January 30, 2020 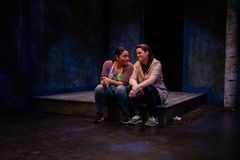