All in the same evening, Laurie Anderson had the sold-out audience of Koerner Hall screaming – actually screaming, for 10 full seconds – and watching rapt as she practised tai chi across the stage. It’s par for the course for Ms. Anderson, the 72-year-old composer, performance artist, inventor and filmmaker who has the kind of career that consistently intersects with modern history.

Ms. Anderson is currently in Toronto on multidisciplinary business. Her VR experience, To the Moon is currently on at the Royal Ontario Museum through January 25; on Sunday she attended the sold-out screening of her 2015 documentary, Heart of a Dog. And finally, since sometimes good things come in threes, Ms. Anderson was the big ticket for The Royal Conservatory’s 21C Festival on Saturday night, when she performed the Canadian premiere of The Art of Falling, a near-indescribable piece billed as “an extended improvisation for viola, cello, and electronics.”

Joined by cellist Rubin Kodheli, Ms. Anderson gave 90 minutes of music and stories. “Improvisation” can certainly be a pesky, catch-all term, but in The Art of Falling, the word is true. The music wavered in and out of the direct spotlight, grounded by an electronic drone that seemed always there; it was touching solos on Ms. Anderson’s tape-bow violin (an instrument she invented that’s worth a Google search), inspired bird impressions by Mr. Kodheli and true chamber music with all its give and take.

When it wasn’t all about the music, it was about Ms. Anderson’s gorgeous stories. They were about everything: Stars, memory, the bardo, James Brown, artificial intelligence, Hebrew letters. Her speech has a unique cadence, like a beat poet with a sense of humour who also teaches yoga; it makes you lean in and listen, and you stay leaned in because everything she says is so darned interesting. She finds something truly ridiculous about Trump’s wall, and her musing about password recovery questions makes a point about the patriarchy. As the anecdotes evolved into essentially a guided meditation, Ms. Anderson had me thinking about birds, Hawaii, my eyeballs, my marriage and climate change.

The Art of Falling is of another age, an old-school style of performance that no one really does any more, probably because it’s really difficult to do with Ms. Anderson’s level of impact. Maybe it’s age, maybe it’s widowhood – her husband, Lou Reed, died in 2013 – and most likely it’s the five decades of making art, but Ms. Anderson’s style now feels distilled and stabilized. It speaks of where she came from, from the creative circles of the ’70s and ’80s that included Pauline Oliveros, Philip Glass, Andy Kaufman and Yoko Ono; it was Ms. Ono’s 2016 tweet, a simple audio clip of her screaming in response to Donald Trump’s November election, which inspired Ms. Anderson to have her Koerner Hall audience do the same.

That bit with the tai chi – that was the surprising moment of poignancy. Lou Reed practised later in his life, and when Ms. Anderson took a moment to explain and demonstrate tai chi, it felt like a big statement about love. Here was a woman, widowed for six years, showing us something that her late husband loved and taking care to present it to strangers with integrity and care. In a strange affect, Ms. Anderson had me excited about getting older, about arming myself with life experience and the kind of wisdom that can’t be rushed.

I’m not sure how to describe what The Art of Falling looks or sounds like, apart from the impression it left on Saturday night. Just like a charismatic person has the ability to talk with you and make you feel as though you’re the only one in the room, Ms. Anderson’s Koerner Hall performance felt tailor-made to the people in that particular audience. Ms. Anderson’s work is an extraordinary display of artistic technique, where emotion is as much by design as is naturally inevitable. 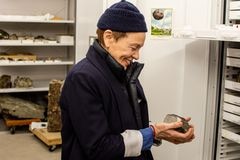