I’d forgotten what I was missing.

It hit me in Act 2, when Michael De Rose’s Divine-sized drag diva, SugarBum, disguised as a horn-helmeted valkyrie, belted out a roof-raising rendition of River Deep – Mountain High, in what looked like a gloriously demented collision of Motown and Wagner.

Where else but in a Petty panto would you get such pure, exhilarating silliness, paired with sheer, knock-’em-dead talent?

There’s plenty of both in Lil’ Red Robin Hood, producer Petty’s 24th serving of family foolery in the British pantomime tradition. This year’s production continues his winning formula, but with a new wrinkle: Displaced from its usual venue, the Elgin, by Come From Away, the show has moved upstairs to the charming, forest-themed Winter Garden Theatre. Its sylvan trappings have inspired a Riding Hood/Robin Hood mashup.

Except the Lil’ Red of the title isn’t the girl with the basket, but an anxiety-riddled Toronto high schooler played by – who better? – Robert Markus, the star of Dear Evan Hansen. Lil’ Red is flunking out and the Ontario government’s education cuts aren’t helping. Then before you can say “Marty McFly,” his school locker turns into a time-travelling portal transporting him back to the Middle Ages.

He arrives in Sherway Gardens Forest, governed by the education-hating Sheriffe of Naughtyham (Sara-Jeanne Hosie), a presumed ancestor of Doug Ford, who is busily confiscating books so she can dumb down the peasants and declare herself the smartest in the land. Defying her is rebel teacher Maid Marion (AJ Bridel), who bravely conducts classes in the forest.

Things take a bad turn when the Sheriffe seizes Lil’ Red’s 2019 history textbook and realizes it can be used to get a jump on the future. The only hope of getting it back is to enlist the aid of that outlaw do-gooder, Robin Hood (Lawrence Libor), Marion’s estranged husband. Trouble is, the two can’t even say “good morrow” without getting into a spat.

Robin and Marion aren’t the only bickering couple. The power-mad Sheriffe and her reluctant sidekick, Marvin the magician (Eddie Glen), have a relationship roughly equivalent to a pair of petulant kindergartners. But love is in the air, regardless: Marion’s nurse, Sugarbum, is secretly crushing on the equally smitten Friar Tuck (Daniel Williston). She greets him by eyeing his portly frame and saying, “The scurvy seems to have subsided.” I laughed out loud – but then, I’m a sucker for medieval medical humour.

Matt Murray’s script piles on the topical and Toronto jokes, too – including a witty sight gag involving long-serving former Mississauga mayor Hazel McCallion. Lil’ Red’s a big Game of Thrones fan, so that gets parodied as well. And it wouldn’t be a Petty panto without a shameless repurposing of pop songs. Bridel and Libor do a terrific duet of the Backstreet Boys classic I Want It That Way, sung by Marion and Robin in a revolving prison cell – one of the amusing bits of staging from veteran director-choreographer Tracey Flye.

Libor, Markus and especially the feisty Bridel are a joy to watch. Hosie, meanwhile, is a worthy successor to Petty, who retired from the villain role – and the stage – in 2015. Like him, she relishes every boo and hiss. She and the much-loved Glen – chalking up his 17th show – already have the rapport of a seasoned comedy team.

My favourites, however, were De Rose and Williston. De Rose’s candy-coloured Sugarbum is a real sweetie with a gift for tart asides. Williston’s jolly Friar serves as the sage marriage counsellor for Marion and Robin – when he isn’t discoursing on the origins of the waffle. (Something to do with a knight in chainmail sitting on an oatcake.)

It turns out that even the most jaded audience member can’t help but succumb to a Petty panto. My companion, a super-sophisticated 10 year old, began by rolling her eyes. In the end, she was giggling. 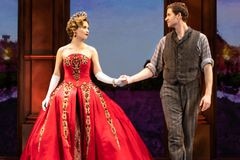 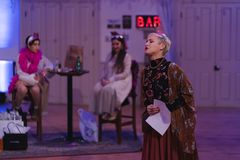 Review
Soldier On boldly depicts the impact of PTSD on veterans and families, but it may be too ambitious
Subscriber content
December 2, 2019 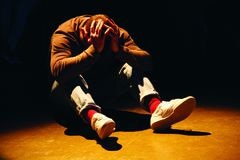